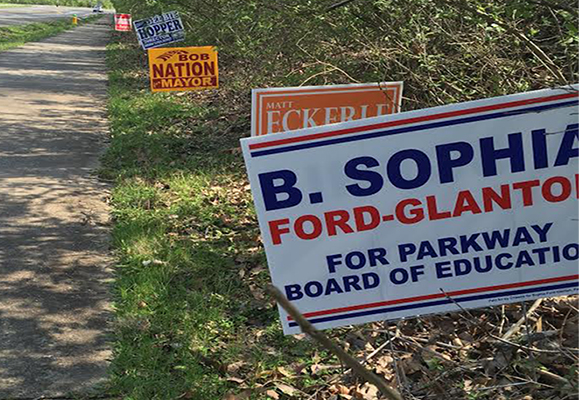 Campaign signs for the upcoming Parkway school board election pile up along the side of Baxter road.

Three seats on Parkway’s school board of education are up for election on April 4, where two incumbents will be facing nine other candidates.

“As a parent of two current Parkway students I feel it is my responsibility to pay attention to decisions involving use of resources and how education quality will be impacted,” Parkway parent Mark Harter said.

While many candidates have varying ideas on what is important for Parkway, Klein Davis, Eckerle, Jacob, Goldford and Todd all agree that bullying within Parkway schools is one of the most important issues to address. Specifically, Eckerle’s children were targeted by a conservative group based in the Parkway community called MassResistance Missouri.

“Since my children were targeted last week, I have learned how to appropriately respond to online bullying,” Eckerle said. “They posted pictures of my own three children on their hate site last Friday. I have informed Parkway of every step I have taken to get the harmful information taken down, avoid escalation, identify the culprits and report the behavior to internet entities whose terms of service they have violated. Parkway needs to be able to help students who are bullied online.”

Along with improving Parkway citizenship, candidates Eckerle, Goldford, Klein Davis and Ford-Glanton would like to focus on promoting inclusivity and celebrating diversity throughout the district.

“We have such a diverse and unique district that I am proud of, but the school board’s membership does not currently reflect that diversity,” Ford-Glanton said. “I want to be an inspiration for all of the children of this district, and when they see a picture of the school board, I want them to be able to envision themselves.”

One of Klein Davis’ goals is to make sure schools are inclusive and welcoming spaces to all students.

I want to make sure the system works for everyone, not just those who have a voice.”

“We need to make sure students with different backgrounds and abilities are able to be successful in the schools,” Klein Davis said. “I want to make sure the system works for everyone, not just those who have a voice.”

Candidates Klein Davis, Todd and Goldford want to focus on keeping curriculum up to date, while encouraging students to push themselves further in their education.

“If I am elected to the board, I will promote funding for the fine arts, social sciences and humanities and I will endorse a curriculum that highlights science, civics and critical thinking skills,” Goldford said. “I will make sure that students are well prepared for today’s complex world.”

Candidate Gore would like to specifically focus on how student knowledge is measured.

“I’d like to see less focus on testing and more on actual in-progress knowledge of a subject. Change in standardized testing requirements would have to occur at the federal level, but local schools could begin the push for a move,” Gore said.

However, some parents are concerned with issues pertaining to students’ health, mentally and physically, specifically the Food Safety Protocol which would discourage consuming food in the classroom and end all food-based fundraisers.

“This issue is important to me because the high school day starts very early, and for students with before-school meetings, rehearsals or practices, it starts even earlier,” Parkway parent Kathy Solodar said. “My daughter has second lunch, and if she didn’t have a chance to eat a snack during fourth or fifth hour, she wouldn’t be able to focus and learn.”

In general, candidates want to continue to keep Parkway a safe, successful and inclusive school district.

“It is important that Parkway continue to maintain its excellent stature in the local school community,” Todd said. “It is a leader in the eyes of other districts, not just in how well our students perform and are prepared for post-secondary education, but also in how we treat our teachers, how we interact with the community at large and how committed we are to improving.”

Candidate Hopper also advocates for students to be involved in the school board’s decisions, so that they are able to understand the changes being made to their school.

“I think it is very important for students to be aware of the school board decisions because these decisions affect the students, particularly on issues related to discipline, curriculum and attendance,” Hopper said. “Students should understand these expectations so they do not do something that goes against the policy and gets them into trouble.  By understanding expectations and policies, students understand why they are being asked to do certain things at school.”

Although many students are too young to vote, being involved in the school board and making your viewpoints clear is one way students can impact their school environment.

“While it is true that many students are not voters, the students of the district have enormous influence in the decisions made. This influence needs to be exercised more regularly by attending board meetings and presenting the student perspective on relative issues,” Puhan said. “The board members really listen when students take the time to educate themselves on an issue and express their perspective at a meeting.”

“If I leave the participation to others, then I have no right to complain. I like to complain in good conscience,” Harter said.