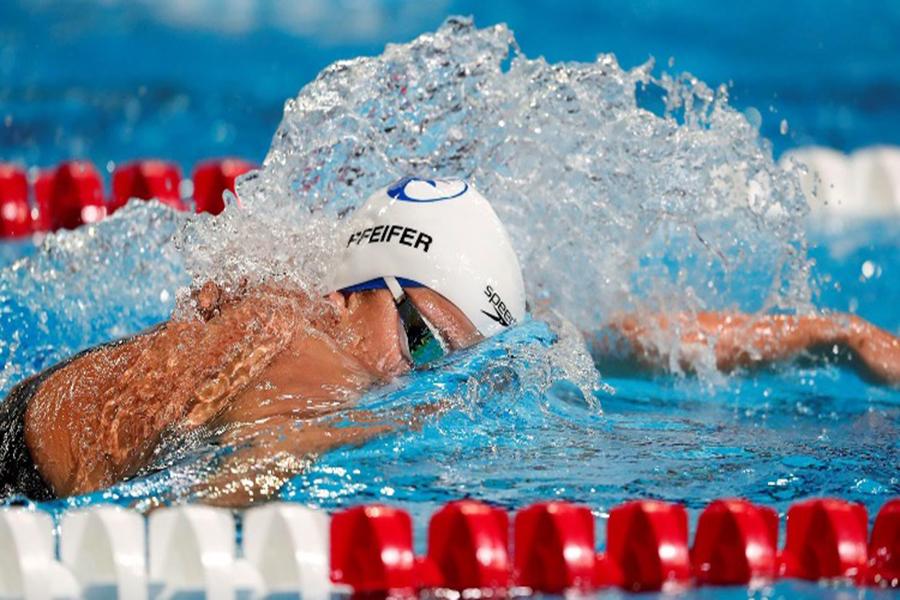 Swimming freestyle, senior Evie Pfeifer competes in Olympic Trials in the summer of 2016.

As senior Evie Pfeifer leaves West to represent the University of Texas Austin swim team, her sister freshman Abby Pfeifer brings the same passion for swimming and talent in the water to the Clayton Shaw Park (CSP) pool. Inspired by E. Pfiefer’s experience at the Olympic Trials, A. Pfeifer continues to thrive swimming at school and with the Clayton Shaw Park Tideriders. Here are their stories. 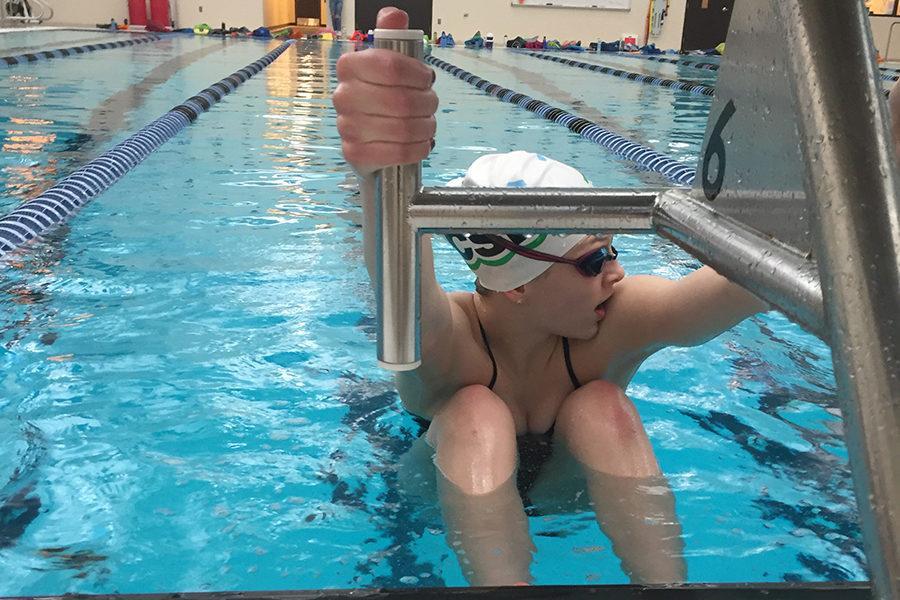 Waiting for the whistle, freshman Abby Pfeifer prepares to swim backstroke during practice.

Waking up before the sun rises, swimming six days a week for nearly four hours a day, freshman Abby Pfeifer heads to swim practice hours before school starts and is back in the pool hours after school ends.

As a swimmer for Clayton Shaw Park (CSP) Tideriders, Pfeifer is currently preparing for sectionals on March 9-12 in Columbia, Mo., where she will be swimming mostly freestyle and backstroke.

“As sectionals approach, I feel pretty confident because last year was my first time, so I know how it’s gonna go,” Pfeifer said. “I’m kind of nervous though because I have a full lineup and they’re all my best events.”

Because she met the National Club Swimming Association (NCSA) time requirement, or cut, for the 200 backstroke, she will attend the NCSA Juniors meet on March 14-18 in Orlando, Calif.

“At a meet over the summer, Long Course Champ, I was going for the NCSA state cut in the 200 back and I made it by like almost two full seconds, so that was really cool. I worked hard to get that cut,” Pfeifer said.

Pfeifer could not have achieved her goals alone though. Currently, she swims in the top group, called Elite, with around 40 other members.

“This team is a lot bigger and feels more close knit than the other teams I’ve swam for,” Pfeifer said. “We know what everyone is going through, so we always try to stay positive. If someone is ever feeling negative, we try to encourage them.”

Her coach and step-dad, Ian Cross also helps her to improve her technique and stay motivated.

“Abby has improved her work ethic tremendously over the last year. She was always talented, but now she is working much harder, and it’s paying off in a big way,” Cross said. “It’s great to see because she might be the most improved swimmer in the area over that time.”

Because swimming is a sport that requires both mental and physical commitment, Pfeifer’s work ethic is based around improving herself and not focusing too much on her competitors.

“She is just getting used to beating people and she loves it, but she is motivated more about what she can do to improve herself, and she doesn’t worry too much about what other swimmers are doing,” Cross said.

Although she is usually confident in her abilities, sometimes the pressure and intensity of meets gets the best of her. Luckily, her teammates can also help Pfeifer with that.

“I actually get really nervous. Meets stress me out. My team helps a lot though, to see that there are other people doing what I’m doing,” Pfeifer said.

Pfeifer is not the only swimmer in her family though. Her sister, senior Evie Pfeifer, also swims for CSP Tideriders and is attending University of Texas at Austin in the fall.

“I’m so happy I get to swim with my sister every day, and I can’t wait to see where all her talent in swimming takes her,” E. Pfeifer said. “I look forward to the day, maybe in college, that we get to race side by side, and I hope she beats me, but not by too much!”

Pfeifer keeps her motivation high by thinking of her goals for the future, including being able to swim in college like her sister.

“The hardest part about swim is the time I put in and the amount of practices because it is like everyday, sometimes twice a day,” Pfeifer said. “College really inspires me though. When I do well at meets, it helps me to remember to keep going and that it’s all going to pay off in the end.” 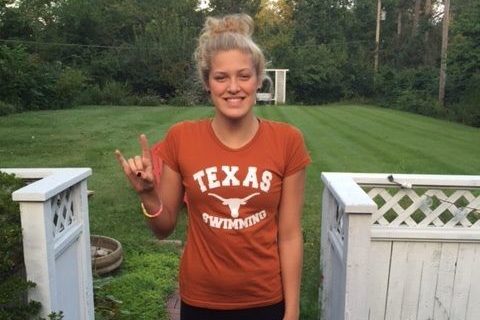 Putting up the Texas Longhorns hand sign, senior Evie Pfeifer poses for her commitment to University of Texas at Austin.

After years of training and competing in meets, senior Evie Pfeifer is heading off to the University of Texas at Austin (UT Austin) and participating in their swimming program.

Pfeifer’s swimming abilities were recognized by multiple different college coaches. She considered University of Virginia, University of Southern California, Texas A&M and University of Arizona, but in the end chose UT Austin due to the swim team’s work ethic and dedication.

“The most rewarding part of swimming thus far has been being recruited to swim in college. College coaches recognizing your ability, and then trying to convince you to swim for their team is a pretty cool process,” Pfeifer said. “It validates all the hard work I’ve put in year-round for the past twelve years.”

Pfeifer is nervous to enter a new and different environment when she attends UT Austin this coming fall.

“College swimming is both really scary and really exciting. I can’t wait to start training with my new teammates, but it’s also pretty intimidating to jump into such an amazing Division 1 athletic program,” Pfeifer said.

Being recruited to swim in college is not Pfeifer’s first accomplishment. In the summer of 2016, she attended the Olympic Trials in Omaha, Neb.

“Olympic Trials was really overwhelming, I walked past Michael Phelps during warm up, and I actually almost ran into him on accident,” Pfeifer said. “Competing against the professional swimmers was both really cool and intimidating. The pool was so amazing. It was overall a crazy, eye-opening experience, and I can’t wait to go back in 2020.”

Her sister and teammate, freshman Abby Pfeifer, looks up to her sister immensely due to her accomplishments and work ethic.

“When she got to go to [Olympic] Trials, it was crazy because I had never seen anyone do that before. So it was like, ‘wow, I can do that too’,” A. Pfeifer said.

Despite her achievements, E. Pfeifer is still setting her goals high in order to improve. Specifically, she wants to drop time in her 200 meter freestyle and win an event at the National Club Swimming Association (NCSA) Juniors meet on March 14-18 in Orlando, Calif.

“Goals are really important. You have to set your sights on something specific to achieve. Otherwise, getting up at 4:30 a.m. to swim before school seems like punishment,” E. Pfeifer said. “If your keep your goal in mind, morning practice becomes an opportunity to work towards that goal.”

Without her motivation, E. Pfeifer would not be where she is today. She relies on herself and her competitors to stay motivated.

“Eve loves beating people. She hates to lose. To motivate her, we just talk about what she has to do to beat certain people,” coach and step-dad Ian Cross said.

Although E. Pfeifer has her team, coaches and family to support her, swimming is ultimately an independent sport.

“Swimming is a challenge because even though you are a part of a team, you’re on your own as soon as you hit that water. You can’t rely on any one else to help you out in the middle of the race. You have to be able and willing to push yourself to do better and be better,” E. Pfeifer said.

However, E. Pfeifer does not lack in motivation to overcome these challenges.

“Eve has a work ethic that I have never coached before. Everyday she brings the heat, everyday she kills herself to be great. It’s insane how hardcore and amazing she has been since she was 9 years old,” Cross said.

Pfeifer does not let other people’s opinions distract her from her goals. In fact, she uses their negativity to increase her desire to win.

“There have been some people I’ve swam with or swam against who are just mean and jealous and try to bring you down. The great thing about all that negativity is that it gets me really fired up,” Pfeifer said. “If you talk bad about me behind my back, I’m going to destroy you in the pool.”

From being recruited to swim at UT Austin to attending the Olympic Trials, Pfeifer’s love for swimming is what made it all possible.

“You definitely have to love swimming to be a swimmer. It’s a hard sport, mentally and physically. You have to be totally committed if you want to see any success,” Pfeifer said.