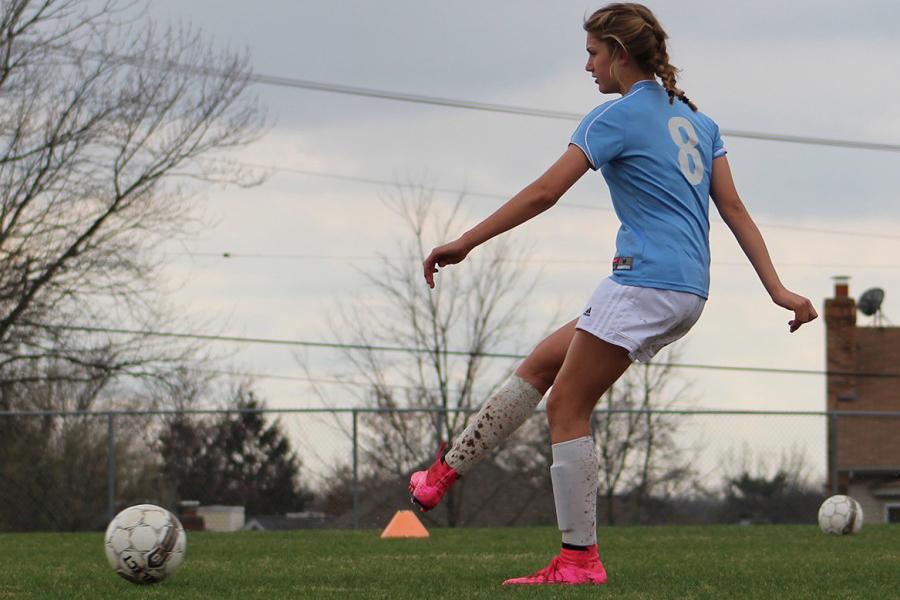 Varsity soccer players overcome injuries: a look into the season

Freshman makes it back to the field

For six months, freshman Ashton Manwill was not allowed to play soccer—she was not even allowed to walk without her crutches.

“About a year ago, I fractured my femur,” Manwill said. “I was out for six months and had to use crutches.”

Manwill was trying to better her soccer skills when she broke her knee.

“I was playing soccer in tennis shoes, and I slipped and hyper extended my leg,” Manwill said.  “Then I fell onto my knee and chipped it.”

With this injury, Manwill was not allowed to participate in soccer activities.

“Going from playing everyday, to not being able to walk was really hard on me,” Manwill said. “I was so active, and then I couldn’t do anything.”

On December 13, 2015 Manwill found out that she has another injury to her back.

“I have a minor bulging disc in my back,” Manwill said. “It’s somewhat painful, but so far, it’s not affecting how I play.”

Despite her injuries, Manwill decided to try out for soccer, and made the varsity team.

“I have been running MKs every other day to help me prepare for tryouts and the season,” Manwill said. “I have also been going out to the field to practice my shooting and drills with my sister and her friends.”

Her teammates say Manwill shows her energy and endurance on and off the field by keeping the players in high spirits.

“Ashton is valuable to the team because she keeps us pumped up, and contributes her skills on the field,” teammate, freshman Bella Hatzigeorgiou said.

“When I was younger, my dad would always say  ‘When do we give up?’ and all my brothers and sisters would scream ‘Never!,’” Manwill said.

Manwill will made her debut for the 2016 soccer season on March 24 against Timberland High School. 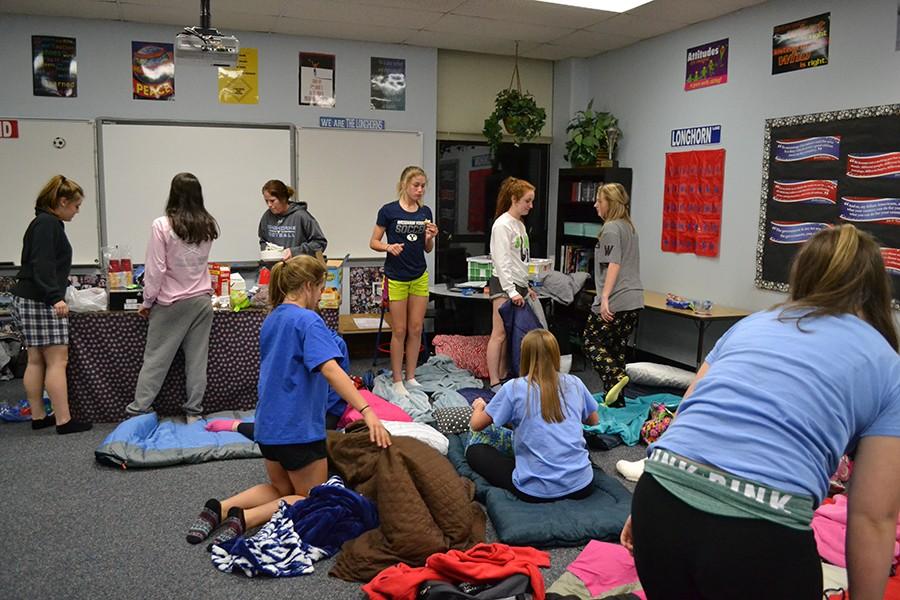 Every year before the season begins, the girls varsity soccer team spends the night in head coach Annie Waylands room as a way to bond before the games start.

Senior forward Lindsey Anstine has returned to the playing field for the girls varsity soccer team after missing all of the 2015 season due to a torn ACL.

“It was tough experiencing an injury like that. It was my first injury and I’ve never missed a soccer game before due to an injury, so it was hard watching the game from the sidelines. Wanting to be out there with the team and helping them win was easily the hardest part,” Anstine said.

Anstine had to begin an extensive five-month physical therapy program before she could touch the field again.

“The difficult part was building up that strength back in your whole leg. It was a weird thing  learning how to walk again,” Anstine said.

Anstine had verbally committed to Indiana State only weeks before her injury.

“I thought about losing my scholarship, but after talking to the coaching staff they understood the situation and what was going on. They helped comfort me and they just wanted updates on my physical strength, there was great communication,” Anstine said.

In her first game back, Anstine scored a goal and also recorded an assist in a 5-2 victory over Timberland.

“I was so excited when I got onto the field for the first time, I was surprised how comfortable I felt on the field. It’s not just a physical injury, it’s also a mental injury. It was a surreal moment when I put the ball in the net again,” Anstine said.

The Longhorns have jumped out to a 2-0-1 record, behind the offensive efforts of Carly Rath. Rath has a team high three goals in the first three contests.

“I have gotten out to a good start, becoming a captain meant a lot more to me though because I’ve dedicated a lot of time to the program. It was nice to be acknowledged as a leader for the team especially as a junior. I hope to fulfill the role on the field by being positive and encouraging the girls,” Rath said.

Seniors defenders Maddie Rose and Megan Loaney were also named team captains. Both are four year starters for the program and look to provide experience to the youthful squad.

“This season season is really important to me cause I’ve been playing soccer since I was 3 years old. All I hope is that I finish strong because I won’t have it next year and I’ll miss it for the rest of my life,” Rose said.

Bella Hatzigeorgiou is one of three freshmen who made varsity this season. Hatzigeorgiou has already scored a goal early into her high school career.

“It’s a really cool experience being able to play on a team with people who are up to four years older than me, and I’m really honored that the coaches think that I have the ability to play with and against people that much older,” Hatzigeorgiou said.

The horns return goalkeeper, junior Demi Ferretti, is looking to the anchor the team’s defense for the second year in a row.

“Wayland always wants shutouts, that is one of our main goals is maintaining a strong defense. Every year we want a district championship and also Summit is a team we always want to beat because they are in our district,” Ferretti said.