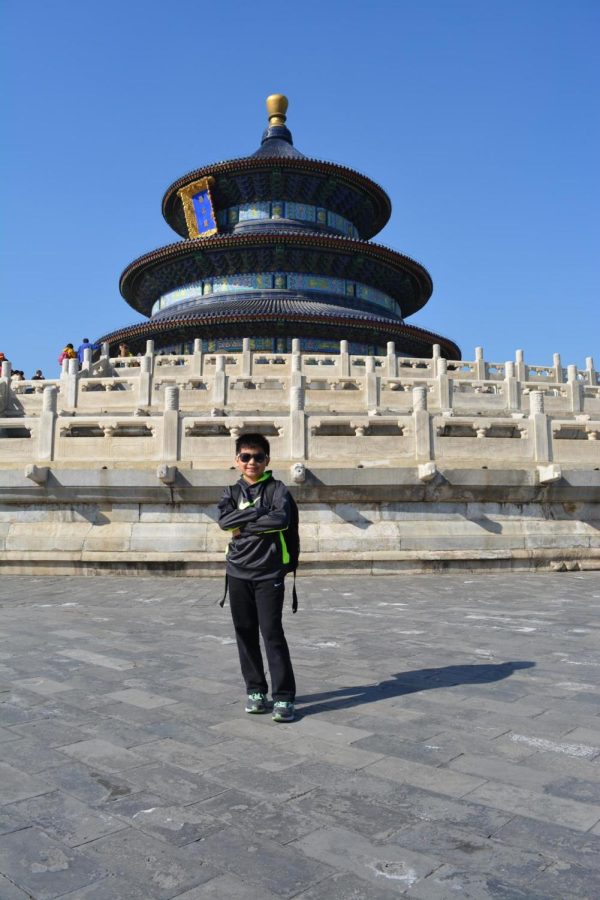 Senior Wilson Gao poses for a photo as a fifth grader in front of the Temple of Heaven, in Beijing China.

Before senior Wilson Gao was born, his parents immigrated from mainland China and Hong Kong, respectively, in the 1990s in order to study.

“Their families had to work hard to support them to get enough money so they could come over here and study. My mom even told me that she ran out of money after her first year studying here, so she had to get a scholarship,” Gao said. “We grew up experiencing different circumstances. Our parents came to the U.S. after having grown up in faraway places. I think from that, they gained different perspectives on the world and how we view other people.”

Gao still has family in both China and Hong Kong and communicates with them primarily through video calls. Gao has visited China three times, mainly touring along the East Coast and visiting relatives.

“[One cultural difference I have noticed is that] in China, one thing that I remember is that there were a lot of gifts, even in business transactions. In America, that isn’t a commonplace thing. Another thing is haggling. Unlike in America, you can see bartering back and forth about prices,” Gao said. “Besides that, I would say [China] is a lot more hectic. It’s not as organized as in the U.S. where there are wide streets and sidewalks everywhere. There were a bunch of people walking everywhere and a lot of cars driving. It’s very noisy and big compared to St. Louis.”

Gao has lived in America for his entire life and feels that being the child of immigrants offers him a unique experience as he is able to experience both American and Chinese culture simultaneously. For example, the Gao family primarily cooks Chinese food at home.

“It’s definitely a unique experience [being exposed to both American and Chinese cultures]. I really enjoy it. Having more experience in both cultures is definitely a good thing,” Gao said. “It expands your worldview and makes me appreciate the differences and similarities between the different cultures.”

Though Gao’s parents immigrated to the United States almost 30 years ago, Gao believes that their immigration experience has ultimately impacted him in a major way.

“[My parents being immigrants has] definitely influenced who I am. They came from a different continent so they grew up around a different culture. My parents have always emphasized that I should work hard and never slack off because it’s just something that’s [not] part of the Chinese culture. Living here, I’ve learned to appreciate personal freedom. Being a part of an immigrant family has definitely influenced who I am,” Gao said.

Gao believes that his parents have instilled values of hard work and dedication in him.

“[My main takeaway from my parents being immigrants] is to always keep moving forward, even when life gets hard, like when my mom ran out of money and for one week my dad lived on nothing but eggs and bread.  Now, my parents are able to afford a nice house and enjoy life. Even if you are struggling, make sure not to submit to that struggle,” Gao said.

Leave a Comment
Donate to Pathfinder
$1200
$2000
Contributed
Our Goal