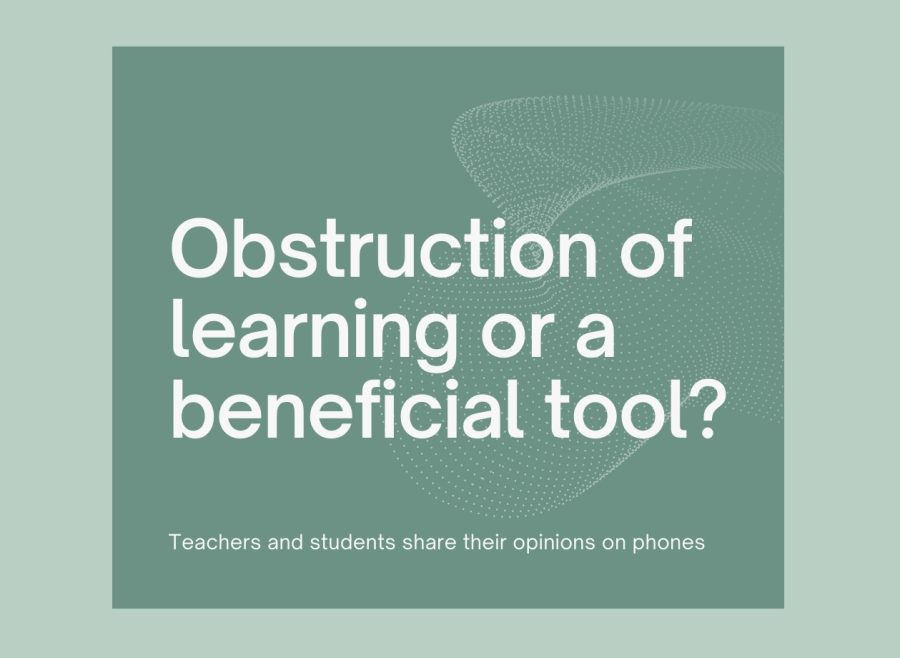 Phones are a major problem between students and teachers, but why?

Obstruction of learning or a beneficial tool?

Are you a teacher who relates to this broken record situation: “Hm? What did you say?” as the student slips the Airpod out of their hood, obviously not listening to the entire lecture you just gave. Or maybe you are a student who has been in this dreaded situation: “I’m going to keep your phone for the day!” the teacher yells as the feeling of dread crawls through your body. Can’t there be a compromise here?

Teachers are fed up and searching for solutions

According to the Addiction Center, phone addiction is as serious of a problem as any other addiction. This behavior has been named “nomophobia,” or the fear of being without a device. Because phones are specifically designed to be a reliance in our lives, adults and students alike are becoming addicted unbeknownst to them.

The Addiction Center has established that the overuse of phones is a serious problem not only in our school but the world as a whole. English teacher Casey Holland says he goes through daily challenges when his students are distracted during his teaching.

“It’s a privilege to be at school and I thought that everybody would feel the same way,””

“Before the pandemic, I would have students come in and they were assigned a slot [for their phone] and they would drop them in [at the beginning of class]. Then coming back from the pandemic, I thought, ‘I’m not going to be a babysitter.’ It’s a privilege to be at school and I thought that everybody would feel the same way,” Holland said. “But the disrespect and just the overuse is way too much. I told [my students] I will get that back out and we’ll do that, but I don’t want to because it’s a waste of instructional time.”

According to English Academic Support Center teacher Kristen Witt, students are experiencing difficulties paying attention due to the unprecedented times they are experiencing.

“[Phone addiction] is a serious problem. It’s a bigger problem this year than in any years past because for the last two years while we were online, we went unattended [on our phones] for too long. Now we are obsessed with our phones and we are not able to put them down, step away from them or do anything that is not on our phones. It is very hard to do work when you have to fight the phone,” Witt said.

While all teachers who were interviewed mentioned that student phone usage should be considered an addiction, Choir teacher Brian Parrish went as far as to compare the phone addiction to gambling.

“Well, if I spent a year and a half gambling all the time, I might be more addicted to gambling today than I was back then. Same thing with drugs. I think if you recognize the reality of [the phone addiction], you know. If you watch the “Social Dilemma” documentary, [they talk about how] when you have teams of 50 engineers whose only job is to make a game more and more addicting to young people, that’s their primary direction. You can’t blame the kid. Do you blame the 50 engineers who did their job?” Parrish said.

Teachers have different ways of dealing with students on their phones in their classrooms. Science teacher Colleen O’Toole has decided that, at least for now, she is not using a pocket organizer or taking her students’ phones daily. While she thinks this route makes it much harder for the teacher, it is worth it in the end for the students.

“I used to [take students’ phones] for my classes, but then I struggled with that one because where do we draw the line on personal responsibility? We live in a world with cell phones and that is just kind of how it is now,” O’Toole said. “When we take them, are we really teaching them how to manage that distraction with the priorities that they need to get accomplished in school? That one is really a back and forth for me. Would it make my life easier to take them away from them and would they pay attention? Yes, but I can’t be the phone police. I don’t know. I really struggle with it.”

Witt has thought of a unique way to ask her students to put her phone away. She says that she has tried the pocket organizers in the past, but like O’Toole, she decided that this does not help the student.

“I hope that [students] can manage their phones on their own and if not, then I have some other ways that we can hold the phone so that we can get our work done,” Witt said. “So usually, I will offer to hold it for them. Or in extreme situations, Baby Yoda can hold them or they get an individualized phone holder. So what that means is that the phone holder would just hold your phone for you so you don’t have to worry about it and you can get your work done, but the student still decides if they want to or not in most cases.”

Witt and Spanish teacher Dominique Navarro have similar strategies, in that they give students the option to have their phones taken away at the beginning of class. Navarro discussed that phones are an even bigger problem in a language class because of the easy access to translation tools that can be used to cheat on assignments and tests.

Navarro has children of her own who are sophomores and freshmen and sees an uptick in their screen time as well. Students and teachers alike are working together to find solutions to this problem.

“I come home and I ask my own kids [what their screen time is], because I started realizing that we have an average screen time of five to six hours. When they come home at three and they’ve already had three hours of screen time. How is that? How is it even possible? To be on your phone for three hours when you finish school, and school is only seven hours long in the first place,” Navarro said.

Students say phones are the epitome of entertainment and distraction

According to freshman Emily Kate Beach, many students try to find the balance between school and their phones.

Junior Joey Schweppe doesn’t like when teachers take his phone, but understands that phones can become a distraction. The disruption of class from phones can lead to learning content later than scheduled, missing parts of the assignment or lecture and distracting the teacher so they can’t do their job.

“I don’t think [teachers] should be able to take our phones because they’re our property. I do kind of agree with the idea that we shouldn’t be distracted by them, but they shouldn’t really be able to take them. I have had my phone taken many times by teachers whether it was justified or not,” Schweppe said.

Junior Jack Maniaci says that when teachers take his phone, he becomes worried that he is missing important notifications.

“Sometimes it makes me really nervous when my phone is taken away because [I worry that] if a family member needed to contact me in an emergency, [they wouldn’t be able to]. In my class where my phone does get taken away, there have been times where my mother will send me an important text, which I am not able to see until the end of that class. Because of that instance, I’ve been worried or stressed during that class about what could possibly be going on without my knowledge,” Maniaci said.

Many of the students agree that COVID-19 did make this problem worse. Schweppe believes that school during virtual campus made it too easy to not pay attention in class, and so now students are used to not paying attention. Schweppe has found that if he puts his phone in Do Not Disturb mode when he has important work to do, it keeps him from being distracted as much.

“I think everybody got addicted to their phones [during quarantine]. So now, students are still always on their phones during school and it is a major problem. I find it becomes a habit to check my phone rather than due to boredom or any other reason, ” Schweppe said.

Overall, some students who are motivated to not let their phones distract them, like Beach, have found ways of making sure that their phone is not in the picture when they are working and would encourage other students to do the same.

“I had been listening to music and doing [school] work at the same time. I felt like I had been working for way longer than necessary and I realized it was because the music disrupted my train of thought. Now, I don’t listen to music while working and I have stopped checking it while I take breaks or in between assignments,” Beach said. “I noticed when I checked it in between breaks that it made me want to check it even more while I was working. I learned that the fastest way for me to get my homework done is to not use it at all while I have homework to do. I never use my phone while the teacher is talking, but my phone does distract me a lot when I am supposed to be doing work.”