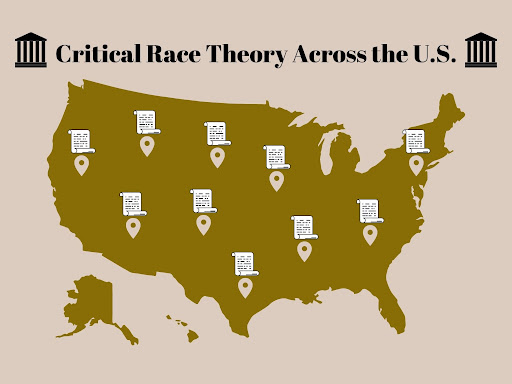 Across America, states are aiming to ban critical race theory from being taught in schools.

St. Louis isn’t the only place grappling with criticism over critical race theory. Currently, across the U.S., 28 states have introduced or will introduce bans on education about race-related topics.

Five states in total have managed to pass legislation banning teachers from teaching about racial equity in general. In Louisiana, Rep. Ray Garofalo introduced such blatantly-racist legislation which would ban K-12 schools from teaching “certain topics related to race.”

“To cut out half, almost all, of America’s history will put Black kids at a disadvantage. If we don’t know our history, how can we come up with our own point of view? How can we grow?” student Re’Kal Hooker said to NBC News. Hooker attends the Living School in New Orleans, La.

“The banning of CRT makes it seem like people of color’s identities aren’t worthy enough of being shared or talked about. It keeps the white narrative at the forefront of our education system,” Ekene Okolo, a student at Westview High School in California, said.

Experts have said it time and time again: critical race theory is not something to fear. When white people are frightened of confronting the fact that racism still persists, and we have something to do with it, then we will continue to live in an age of fear, where banning materials from being taught is not only acceptable, but frequent.

The bottom line is, critical race theory is not an evil ideology or a ploy for divisiveness. Racism is the divisive force. This theory simply aims to address why these divisions occurred, who perpetuates them and how racism still harms people today. Whether it be studied in the legal field, or introduced to children beginning to grasp racism embedded in the U.S., critical race theory is not a weapon. Rather, it is an essential tool all of us can use to gain a better understanding of our world.