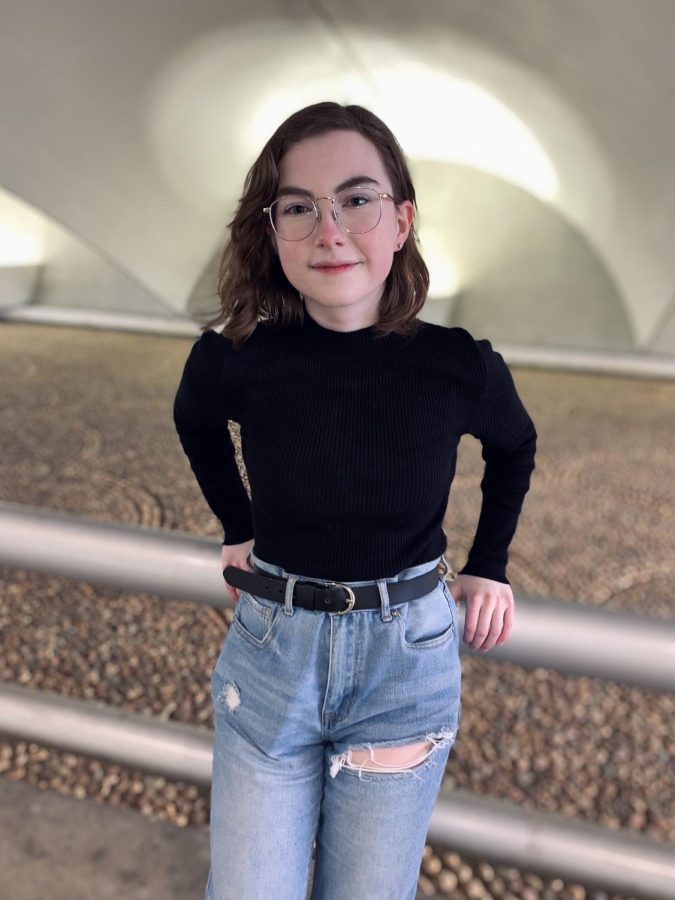 How would you describe your book in one word? “I would describe my book as gentle. I know that a lot of people like to write about really dark topics, but after doing some of that for other projects, it kind of wore me out. This book is like the antithesis to that, and I hope that it would leave the reader feeling a little better about the world,” senior Eva Phillips said.

While some students believe that Creative Writing consists exclusively of writing, as the name suggests, “Realm of Possibility” challenges this thought. Written and illustrated by senior Eva Phillips, “Realm of Possibility” is a comic following a small, fuzzy, glowing protagonist from space who finds himself in unknown environments across the globe.

“My main goal for the final project was to make a comic. I had to figure out what [the comic] was going to be about [with it being] doable in two and a half weeks, which was a struggle. I thought about having a really simple character with different environments it would go through that could be done in eight to 10 fully illustrated and color[ed] pages,” Phillips said. “[The story] is actually a poem that went along with the illustrations. Writing for comics generally is strictly dialogue and I knew it wasn’t going to have any, so I thought poetry would fit well.”

Phillips says she decided to let her art fuel her writing. As a result of this, she completed many of the illustrations before she began drafting.

“I had a vague idea of an opening, and how it would end and filled [the story] in as I was drawing everything. I didn’t actually finish writing until I was more than halfway done with the illustrations. So I based everything around that. I like to think of stories visually, I’m really not the best with words so that really helped me with a framework for my writing,” Phillips said.

With a plan to study illustration next year, Phillips took this project as a chance to improve her sequential art—art in a sequence such as in comic strips—and background skills, which she did not have a lot of practice with.

“Because I am going to be studying illustration next year, I wanted to look at sequential art. I’ve never really done it because it’s such a time commitment and it wasn’t something feasible for a class, until now,” Phillips said. “I knew that I would actually have to set aside time to finish it instead of prioritizing my homework, getting halfway through [a piece] and dropping it. It was a really great opportunity to go into that. A lot of kids in Creative Writing write for fun, [while] I have never written anything for fun. I really took the class to aid in my storytelling skills, and I was thinking about applying that to comics and other art more than just writing.”

Unlike other students, Phillips has decided to not only publish her work on Amazon Kindle but also print physical copies which she is selling.

“I’ve been trying to raise money to pay for college and my mom [suggested], we print and sell physical copies. I’m so excited because I actually have a physical thing,” Phillips said. “[Publishing physical copies] was completely different because you have to factor in the cost of printing, and fix the formatting so I didn’t have bleeds. I had my mom help me make the bleeds [so] we could get [the book] shipped off, printed and start selling. It was a big process but it was really fun to sell my book. “

Through her book, Phillips wants to send a message of comfort.

“Life can be a little crazy. You can be in an uncomfortable situation and a new place, but you will find a place that is comfortable for you. You will adjust to new circumstances and find some[place] where you can relax and step away from all the craziness going on around you,” Phillips said.

Phillips believes that Creative Writing challenged her boundaries when it comes to both art and writing and that Barnes made the fully virtual class fun and exciting even though they were distanced.

“I 100% recommend [the class]. It was a lot more difficult than I expected, but Mr. Barnes is an amazing teacher. My favorite part [was], at one point, he had to get up to go do something [and] he had a cardboard cutout of himself [on Zoom that would] take his place in the seat. He’s like, ‘I’m gonna leave you with a sub for a second,’” Phillips said.