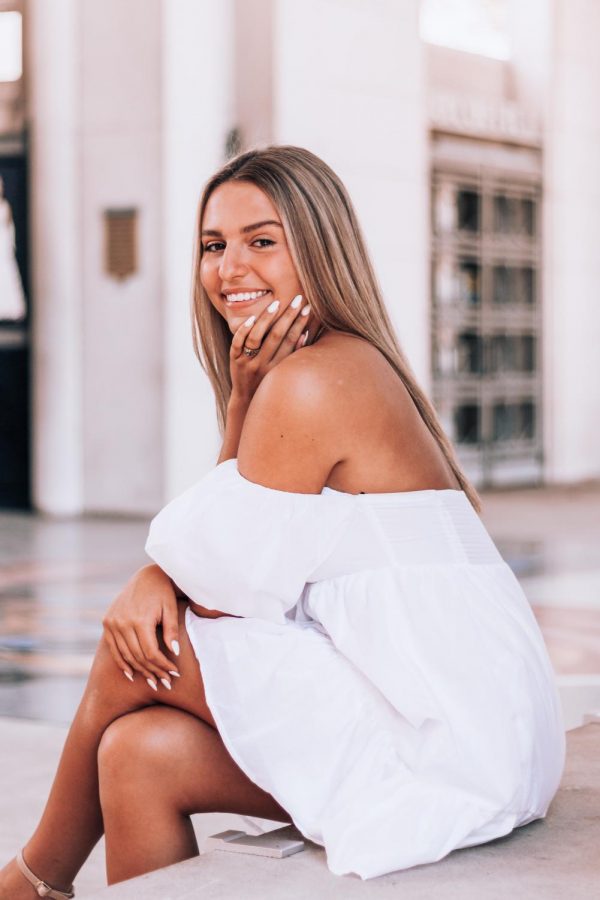 How would you describe your book in one word? “I would say relatable, which is not what many people would choose. I say relatable because there are so many different things you can relate to in my book, whether that be a person or an animal that you truly have such an unbreakable bond with, or feeling social awkwardness like the little boy in my book. [Even] having a struggling relationship with your parents and having money issues or having them not throw money at issues or just stuff like that. There are so many different parts and aspects of my book that I feel like a teenage person could relate to, which is kind of surprising” senior Lauren Barron said.

Inspired by her dog named Finley, senior Lauren Barron decided to write a short story about a puppy that helps a young autistic boy named Jack Cunningham. “Just a Mutt Named Finley” follows Jack’s journey of becoming closer with his family as they adopt a puppy, named Finley, from a shelter.

“So two days before [the story was] due, I [decided to] rewrite it. Before I decided to write “Just a Mutt Named Finley,” I want[ed] to write a book about high school cliques and girls that think they fit in, kind of like my podcast. I’m very passionate [about] things related to that so I originally wanted to write about it. I’d written about that so many times in creative writing, I was like, ‘I wonder about [writing] something more fun that is more me.’ So two days before it was due, I started writing my book. I completely changed my entire plot, and I love what I wrote about,” Barron said.

Barron wanted to write about an autistic child because of her passion for helping children with special needs. Since she was in the fifth grade and met a young boy with Asperger’s named Elijah, Barron’s passion has only grown.

“I saw potential in Elijah and [he] is the sweetest boy I’ve ever met my entire life. One day, kids found him as an easy target because [had] Asperger’s, and our maturity in fifth grade wasn’t at the level where we can be like, ‘well that’s pretty messed up to be picking on someone,’” Barron said. “He was so much fun to hang out with. And so non-judgmental and just a good [person] that I just loved being with him so that’s kind of where it all started.”

Hoping to teach readers the importance of standing up to those different from you, Barron wants her book to be a reminder to not be a bystander.

“If you see a kid that’s clearly with a disability, or maybe it’s not super obvious, maybe they’re super quiet and soft-spoken, go say hi to them. If there’s a kid that people continue to make fun of because they’re a little bit behind, don’t be a bystander. I know I sound like a fifth grade bullying presentation, but don’t be a bystander [and] go hang out with them,” Barron said.

Barron explained that getting editing help from her classmates and Barnes helped her to improve her book and even helped her through a writing block.

“Whenever I get writer’s block, Mr. Barnes is the best person to help out with that. So editing my book, Mr. Barnes is the best editing partner,” Barron said. “Publishing my book was so empowering in the weirdest way. It is so cool going on Amazon, looking at my book and seeing it for $2. I never thought I could look up Lauren Barron and see a published author next to my name.”

Having had Barnes’ class for both Creative Writing and AP Lang, Barron felt that Socratic seminars were her favorite part from both classes and suggested that others should consider taking the class.

“I might sound like a crazy person for saying that Socratic seminars [are my favorite], but in AP Lang, [they] were so much fun. The conversations we [got] into were deep and intellectual and it was so interesting. We would talk about books, [like] “[The] Great Gatsby” and “Lord of the Flies,” and would have topics like the rhetorical triangle. I just loved hearing people talk about it,” Barron said. “'[The] Great Gatsby’ is one of my favorite books talked about because the idea of old money is so fascinating in my head [while] some people are so against it, but I have to say it’s so cool to hear other people’s perspectives.”