The art of flexibility 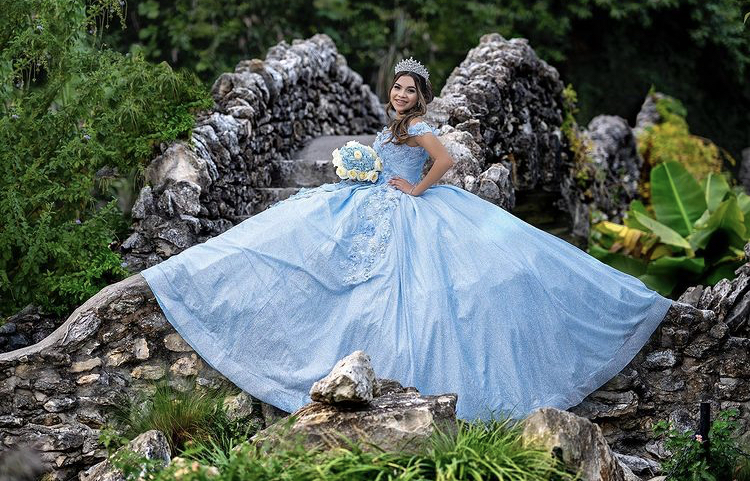 Sitting on the corner of the garden wall, Trejo-Vasquez sits still once more for the photographer. This photo shoot was taken in November 2020 at the Japanese Tea Garden in San Antonio, Texas, and Trejo-Vasquez decided it was nothing like what she thought a photo shoot was like. “I was expecting it to just be quick and easy with no crowd, but it was the exact opposite,” Trejo-Vasquez said. It was a bit awkward because of how long I would have to hold a pose.”

Between arguing for refunds on cancellations, traveling to San Antonio, Texas and rehearsing with her friends and family, freshman May Trejo-Vasquez has been in crunch mode for the biggest event of her life yet: her quinceañera. Trejo-Vasquez and her family faced multiple bumps in the road the last couple of months, but that has not stopped them from seeing their quinceañera vision through.

A quinceañera, a coming of age ceremony for 15-year-old girls, signifies the passage of youth to becoming a woman. Traditional Mexican quinceañeras were about teaching the quinceañera her duties and responsibilities to her community, family and her future husband.

“[A quinceañera is] a Latino-Catholic kind of tradition,” Trejo-Vasquez said. “You don’t have to have the religious aspect of it. For me, it’s just more of a big party because I’m not Catholic. I think it will be a fun day for me and my family.”

After planning her quince for the last year and a half and contending with COVID-19, Trejo-Vasquez is excited for the relief that will come to finally have her quince. Originally scheduled for September, COVID-19 pushed her celebration to March 2021.

“I wasn’t too excited to have a quince, but it was really important to my mom and grandma. My grandma wasn’t able to have a quinceañera for my mom or any of her sisters… since [my mom] didn’t get one, she wanted to make sure her daughter had one. I’m her only daughter so it’s really important to her, but as it gets closer to the event I’m more excited about it,” Trejo-Vasquez said. “I just didn’t like the idea of performing in front of everybody and the idea of having to socialize with everybody,  so I was kinda nervous for it, but then towards the middle [of the preparation process] I was thinking ‘okay it can’t be that bad.’”

Trejo-Vasquez is originally from Texas, where her quince was held. She moved to St. Louis in July, one factor that has made quince-planning challenging.

“The fact that we live [in St. Louis] makes it hard. We don’t live in Texas, but that’s where we’re having [the quinceañera]. I had to go down to Texas to pick up the dress, to do the cake testing and do dance practices. It’s just a lot of traveling,” Trejo-Vasquez said.

Check back each Wednesday for the latest chapter of Trejo-Vasquez’s story.

One Response to “The art of flexibility”