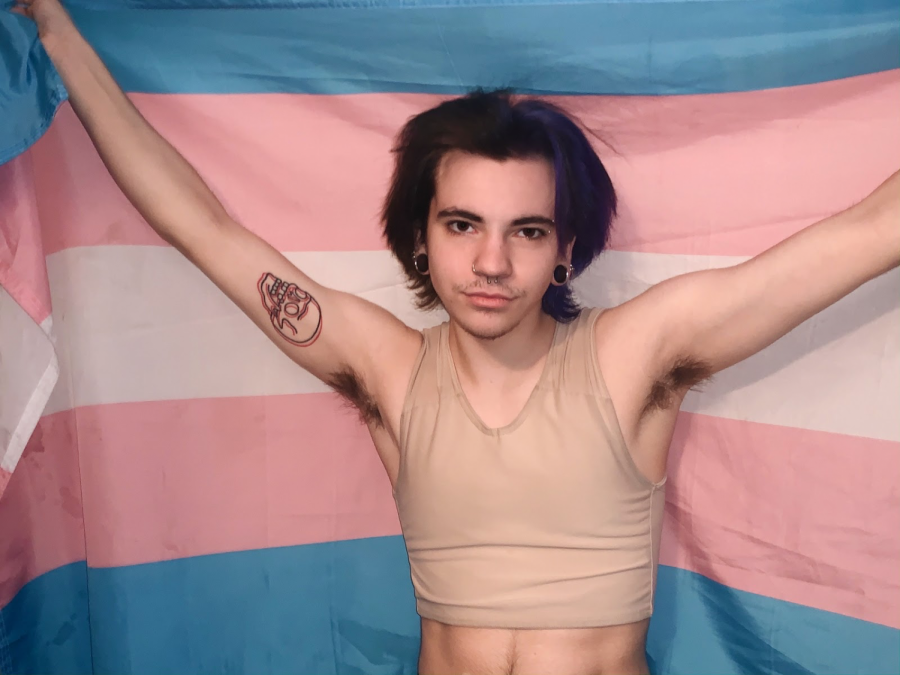 Holding up the transgender pride flag, senior Tony Morse takes a picture in his binder. He got the flag towards the end of middle school. “The flag for me is a symbol of pride,” Morse said. “It reminds myself and others of who I truly am. I am wearing a binder in my photo; I used to be very very self conscious of letting others know I used a binder. Now, I am comfortable enough to post pictures of me in it and wear it out in the open. I feel as if I pass enough. Once I get top surgery, I am so excited to not have to deal with wearing the chest binder. It definitely takes a toll on me having to wear it. It gets physically uncomfortable and I long for the day when I can put on a shirt without having to put it on first, as well as being able to take off my shirt and be proud and comfortable.”

7. The battle to become a man; four years later

As a seventh grader, senior Tony Morse decided that after years of gender dysphoria, he would take the leap to come out as a transgender male. He cut his hair short and kickstarted the long process of transitioning, a journey that, years later, he is still undergoing.

In the beginning of his transitional journey, Morse dealt with remarks and misgendering.

“Before I was on testosterone, [misgendering] was a constant thing. I would get called ‘she’ all the time, and 50% of the time, it was my classmates doing it on purpose. It was still new to everyone, and not everybody knew what it was. No one wanted to respect me,” Morse said. “As I started testosterone and years passed, people were finally like, ‘oh, that is just Tony.’ They’re done trying to figure me out, [and] they’re done trying to tear me down.”

Along with the misgendering, Morse’s fear of using the male bathroom has lessened as well.

“[Freshman year], I was terrified to use the men’s bathroom, [and] I used the bathroom in the nurse until about sophomore year. Now, I use the men’s bathroom every single day. I walk in there with my head held high, and I know for a fact that if anyone says anything, I will stand up for myself. I don’t care what anyone has to say about me using my own bathroom,” Morse said. “Freshman year, I just remember I would go into the bathroom and have a panic attack just simply because I wanted to pee. My confidence has gone up so much.”

In the beginning of his transition, Morse searched for a doctor that would treat him with testosterone hormone therapy but struggled with insurance to cover it.

“I went on testosterone Dec. 10, 2016,” Morse said. “Starting that was such a long, tedious process [because] it is really hard to find a doctor [who will treat] that out here. The doctor that I went to [was] Dr. [Christopher] Lewis, and I was his first patient. Now, he is a big doctor for transgender people. He has so many patients now, and he helps so many kids. I helped move him forward, [and] I think that is pretty cool. I have been seeing him for years, and he is amazing. My perception of myself from freshman year to now is completely different.”

Few realize the struggles that seemingly mundane tasks like getting a license can cause for transgender people.

“I didn’t get my license until I was 17 and a half because I did not want to get it with my old name and gender on it. I would have rather waited to get my license than have to deal with that all the time. It was more of a comfort thing for me,” Morse said. “I have my name legally changed, and I have my gender marker changed so my birth certificate and driver’s license all say male. It took about a year.”

Turning 18 has started a new journey for Morse. Top surgery, surgery performed on the chest to remove breast tissue, is the next part of his gender transition.

“I turned 18 in December. I was so excited because I was like, ‘ok, now this is the time to crack down and start figuring out everything,’” Morse said. “We have been looking at this for months and talking to doctors. I will most likely have to travel out of state, and it is a pretty hard recovery, but it will all be worth it in the end. I am just so excited to finally take that next step to feel completely comfortable to myself. It is so exciting.”

Morse created a GoFundMe in the past to help with the payment of the surgery, but due to inactivity, he has started a new one.

“I still have all my money from my old GoFundMe put away in the bank. Even if insurance does cover part of it, it will not cover all of it whatsoever, so I just started this because I know I have a lot of support. It will move forward and help me get to that goal of getting the surgery,” Morse said. “That is also such a long, tedious process as well because I have to find a doctor that will do the kind of surgery I want to do.”

There are a few types of surgeries done for female-to-male transitions. A common procedure is called a double incision, but Morse has decided to go a different route.

“There is a double incision, with the two giant scars, but I want to go for a keyhole surgery which is a lot less invasive,” Morse said. “I know that there are not going to be any doctors here that know how to do keyhole; they probably only know how to do double incision because that is the most common and least complex type of surgery.”

Morse has decided that this is the time to do it because he is graduating this year, so he would not have to miss any school for the surgery and recovery. Insurance is proving to be the most difficult aspect of the journey.

Top surgery is one of the final steps in completing Morse’s transition and to quiet the dysphoria he has struggled with for so long.

“I still struggle with dysphoria because I haven’t gotten top surgery yet. I try my hardest to make sure I pass even though I know I pass and all my friends tell me I pass,” Morse said. “It is just those few people, that when they misgender me, to this day it will still take such a huge toll on my confidence. One wrong pronoun from the wrong person, and it will ruin my whole entire day. That is just because it is something I have been trying so hard to not deal with.”

For so long, I have felt the need of validation from others to see me as a male, but I have gotten past that point. People don’t have to understand.”

A large part of his journey has been rising above others’ opinions.

“I just try my best not to let other people’s opinions annoy me because, at the end of the day, I know I am a male, and I know that I do pass. It is just a lot of confidence within myself that I have to try and outweigh how others perceive me.”

The past four years have brought physical and emotional change for Morse and he has a newfound confidence that he didn’t have as a freshman.

“I think back to freshman year, and it is just crazy to think that I was there. I was pre-t[testosterone], and I had so much hope for completing my transition. I clearly still have so much hope. I think I have definitely grown a lot since freshman year,” Morse said. “I definitely did not think I would get to this point when I was a freshman. I did not think it was possible. I did not think that I would be happy where I am right now, just four years later. I feel so much better about myself.”