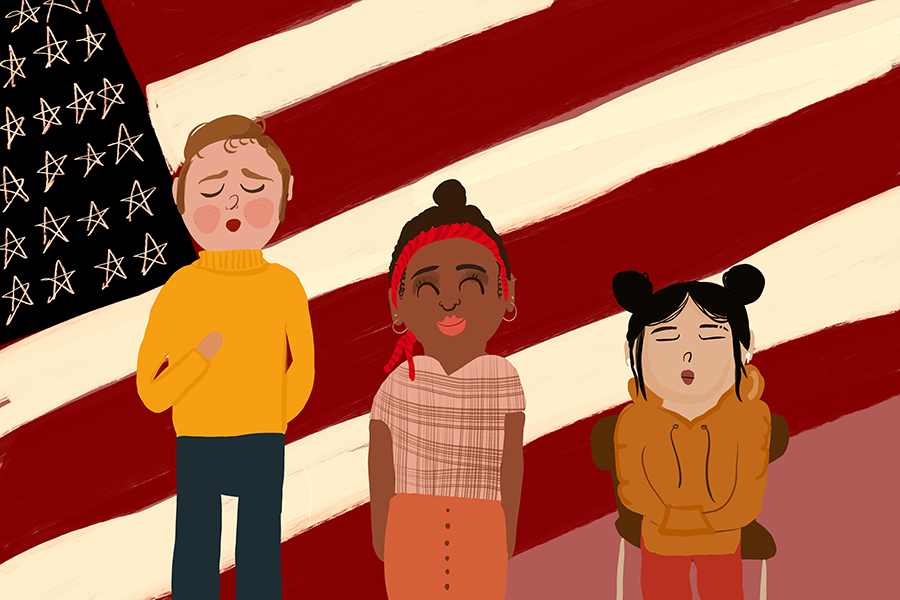 Missouri law requires public schools to recite the Pledge of Allegiance once per school day, though individual students are not required to participate. (Caroline Judd)

Missouri law requires public schools to recite the Pledge of Allegiance once per school day, though individual students are not required to participate.

As 14-18 year olds, high schoolers have grown up in a time of growing political polarization according to a 2017 study by the Pew Research Center which says that “across 10 measures that Pew Research Center has tracked on the same surveys since 1994, the average partisan gap has increased from 15 percentage points to 36 points.”

Political polarization is played out across many issues ranging from government aid to military invention to immigration. While none of these issues are hugely effective upon the day-to-day lives of teenage students in a Missouri suburb, political polarization still exists at a high school level. Though this is not necessarily an entirely partisan issue, one of the subjects students find themselves largely divided upon is the Pledge of Allegiance.

Bill 1750 of the Missouri House states that “every school in this state which is supported in whole or in part by public moneys shall ensure that the Pledge of Allegiance to the flag of the United States of America is recited in at least one scheduled class of every pupil enrolled in that school no less often than once per [week] school day.” While Missouri public schools are required to recite the Pledge of Allegiance every day, individual students are not bound by that same law.

For Parkway schoolers, the Pledge of Allegiance is a daily occurrence. Because of this ritual, students like senior Laura Rein were surprised to learn that many of their classmates were abstaining from the recitation.

Rein stands and recites the Pledge of Allegiance every day and believes all students should have the option to choose whether to stand or sit, though she may not agree with those who do not.

“I have the opinion that no one should be forced to pledge their allegiance to something. That’s something that each person chooses for him or herself. I wouldn’t want anyone to force me to stand for the flag. I don’t look down on people who don’t stand, I’m just curious because I feel like the good in this country outweighs the bad and I feel like the flag represents so much of the good in that it’s something that unites us. I believe in the ideas that this flag stands for and the freedom of that.”

Like Rein, senior Jonny Yazdi believes that students should stand but should not be required to stand.

“I don’t think it should be a requirement because, just like I preach other amendments, I preach freedom of speech and I understand that it should go both ways, such that, if I want to stand, you shouldn’t tell me that I shouldn’t be standing and I’m not going to tell you that you have to stand,” Yazdi said.

While Yazdi is supportive of the United States’ current political administration, his reasons for standing are not political but familial.

“Even if we had a president who I didn’t like, I’m still going to root for the country because, as a citizen, I don’t want it to fail,” Yazdi said. “It’s also pledging allegiance to the country that’s given my family so many opportunities like my grandfather who came over here from Iran. We’ve been successful here so I’m thankful for that.”

Like Yazdi, Rein believes that politics and the Pledge of Allegiance are unrelated concepts.

“I think just because I don’t agree with an administration is not a reason to disrespect the flag,” Rein said. “Under Obama’s administration, I felt like my religion was under attack because they were making laws that required health care that I didn’t feel like I needed. I still respected what was good in this country and I didn’t hold a grudge against the nation.”

Rein believes that standing for the Pledge of Allegiance is a way to show respect to her country and its history which she believes is made up of more good than bad.

“I’m just trying to support all the good that’s in this country, what it was founded on, this idea of freedom and independence and not being controlled,” Rein said. “It would take decades of deviation from our founding principles to cause me to turn against America. That’s basically what it is. Disrespecting the flag, which is a symbol of America, is disrespecting America. It’s one thing to stand in respectful silence, but it’s a whole other thing to disrespect the flag and everyone who’s fought for the good in this country. There’s an important distinction.”

The Pledge of Allegiance is played over the announcements every day during fourth period. During this time, students like senior Tony Morse choose to sit to demonstrate their dissatisfaction with the state of the country and its administration.

“I used to stand for the flag, growing up, because that was what everyone did. The bell rang and they would point to the flag and tell you to stand up, it was required, it used to be required,” Morse said. “As I got older I learned more about the world and how our country is run and all of the injustices that go on in our government, especially within recent years.”

Morse believes that sitting during the Pledge of Allegiance does not demonstrate a hatred for America itself but for its current political climate.

“I actually didn’t stop standing until around the time when [President Donald] Trump was elected, but within the past few years, as people that I associate with were being impacted like the LGBT community and all other types of minorities I felt like I didn’t want to stand and be known as going with it,” Morse said. “I don’t hate America, I live here, it’s not awful, but I really do not agree with the way that things are run sometimes and the way that people are treated and I really don’t want to associate myself with that.”

Like Morse, senior Morgan Eaves sits in protest of the country’s treatment of minority groups, which they believe is lacking.

“I always look around and wonder how are people standing. I hear so much about LGTBQ rights and others being violated, so why would I stand?” Eaves said. “It’s a personal thing, too. It’s such a privilege thing to want to stand for the flag, especially if you’re a majority in this country, you don’t even think about that because you’re just kind of blind.”

Neither Morse nor Eaves believes it should be a requirement to sit for the Pledge of Allegiance, but Eaves believes that everyone should so long as President Trump is in office.

“I really do think everyone should sit because I feel like if you do stand, you’re agreeing with Trump and Trump doesn’t like people like me,” Eaves said. “Really question why you stand. Is it because your teacher said so? Just because you live in this country doesn’t mean you have to agree with everything that’s going on. I would [stand under the Obama administration] because you would see on the news that Obama was such a good guy and he cared so much about everyone.”

While Eaves stood under a different presidency, it will take more than a change in office for Morse to stand again.

“A lot of people associate it saying ‘you just don’t want to stand because Trump’s the president.’ That’s part of it, but even when our president changes I probably still won’t stand for the pledge just because I don’t like what it stands for,” Morse said. “So much would have to change. The way our whole country is run, the injustices, the unfairness, everything that happens with men and women and everything in between and the LGBT community and colored people and disabled people. The world is so much different for those people. If I were to stand, I would want to stand for a country where everyone is equal.”