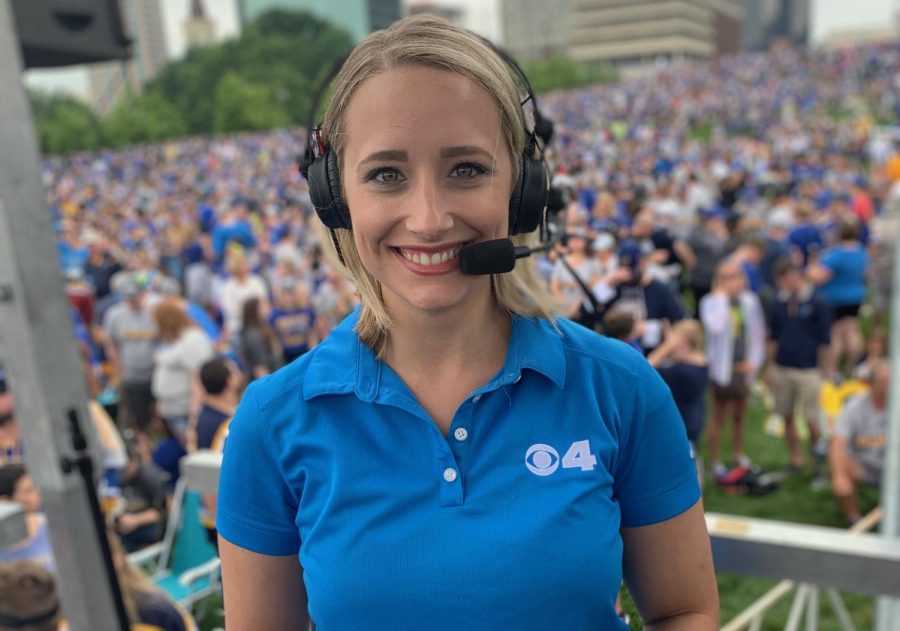 Standing on The Arch grounds, Kim St. Onge covers the St. Louis Blues rally after winning the Stanley Cup. St. Onge wore a headset to hear the anchors in her ear. “The crowd was so loud that day that even with the headset I could barely hear the show. I was on a stage in the middle of tens of thousands of people–pretty surreal. It was so cool to see the whole city come together to support the Blues. I’ll forever think of that day as one of the coolest things I’ve ever done,” St. Onge said.

10. Behind the scenes: Alumna Kim St. Onge shares her journey to becoming a broadcast journalist

Covering stories from the Iowa Caucuses to the Joplin Tornado, 2008 alumna Kim St. Onge can now be seen on  KOMU-TV. St. Onge studied public relations at Mizzou until she found her passion for journalism.

“One of my best college friends introduced me to broadcast journalism. I instantly fell in love with this career path and got involved right away,” St. Onge said. “After visiting the KMUTV station, I knew wholeheartedly this is what I want to do. I [wanted] to be a reporter.”

St. Onge soon began doing cut-ins for the Today Show, which is when the camera is turned over to a guest who then does a special scene for that days show. St. Onge loved doing cut-ins, so she told her advisor she wanted to switch majors. In 2012, St. Onge graduated from Mizzou Journalism School with a degree in broadcasting and began her career reporting at KCCI-TV. St. Onge has been reporting for seven years and believes she has acquired a routine.

“It all starts with the story idea. Coming up with story ideas is the hardest part of the job. I think a lot of people have this idea that in the business, the reporters get into work, and they’re given these story ideas, the people we should be interviewing and sometimes even writing the stories for us, but that is so far from the truth, we [reporters] come up with all of our own story ideas.” St. Onge said.

“We do what we call enterprise; they [KMOV publishers] don’t want stories you can find in the newspaper, they want stories that require speaking. You call sources that give you information that you will only be able to see on KMOV.”

“Sometimes I’ll get in, and they’ll say, ‘hey Kim, there’s a fire over here. There’s been a homicide over here. Go!’” St. Onge said. “There’s something new everyday…it’s captivating.”

Once a story idea and angle are established, it is time to start approaching the interview process. St. Onge will pair up with a photographer and gather story information, followed by either going back to the station to work from there or set up an office somewhere nearby if she is too far out.

“I’ve worked at a McDonalds. I worked at a Dierbergs last week. Sometimes, we just sit in the car. The office changes a lot, but it keeps the job interesting,” St. Onge said.

Whether at the station or a temporary spot, St. Onge spends the end of the day logging the interview from earlier, getting the script approved by the executive producer, voicing the story and lastly, giving it to the photographer to edit and piece together for Channel 4 News. Before she leaves, she writes up a version of the story for the KMOV website, as well as an additional cut down version that will air on the morning show. She and her team close the office by writing what they call a ‘night note’ which notifies the station of anything important and possible follow-ups from the workday.

“The thing with this job is that it’s so unpredictable. Some days it’s slow, some days it’s go-go-go and you don’t stop the whole day. You can be out in the cold, the heat, the rain [and] working under those circumstances is completely challenging. Sometimes, I’ll revolve a whole day around an interview and the person cancels. Then at 6 p.m. you’re scrambling to come up with a story to air at 10 p.m.,” St. Onge said.

After 11 years in the business, St. Onge believes that people are the most rewarding part of her job.

“A couple of weeks ago, I did a story on a woman with a roach infestation at her townhome in North City, and she felt like the housing authority in St. Louis wasn’t owning up to the conditions of the townhome,” St. Onge said. [The housing authority] wasn’t taking care of it like they should have to get rid of the roaches. Within five minutes of the story airing, I had a gentlemen reach out from St. Louis County [saying] he was a father and that he wanted to help her. He ended up donating more than $500 to help her and wanted to make sure she could stay in a hotel with her two kids. It’s stuff like that that makes you feel that you can make an impact in that way where this stranger reached out and felt compelled because of your story. [This] is [why] I do this job. It’s giving the voiceless a voice and empowering people.”

St. Onge has been awarded a Regional Emmy, an Associated Press Award and Iowa Broadcast News Association Award for her talents in the business.

“It really requires building connections and relationships with people in the community who can tip you off about these stories,” St. Onge said.

St. Onge has worked in and out of St. Louis and as part of the News Channel 4 team since April 2019, and believes she is her happiest when reporting in St. Louis.

“I love that everyone has so much pride in the city. I feel like there are so many people who aren’t from this area who have negative things to say. They see these crime statistics and they have this idea of what St. Louis is, but to me, that’s not what it’s like,” St. Onge said.

As a reporter, St. Onge’s perspective on the city has changed.

“As a broadcast journalist, you’ll see the best of the best and the worst of the worst. I’m in North City, covering homicides and really sad stories, so you’ll see a lot of heartbreak, but you’ll also meet these incredible people like that man I mentioned earlier who stepped up and wanted to pay $500 plus to help someone out,” St. Onge said.

Broadcast Journalists work around the clock searching for, developing and reporting stories. As St. Onge fills her hours, she obtains an understanding of what her occupation can offer in terms of life.

“One of my old photographers phrased this job as a backstage path to life, and I would 100 percent agree with that. You get to meet so many interesting people and you get access to all these places that you normally wouldn’t have access to. You get to hold officials accountable. It’s so interesting to meet so many people with different perspectives on life and see so many different parts of town,” St. Onge said.