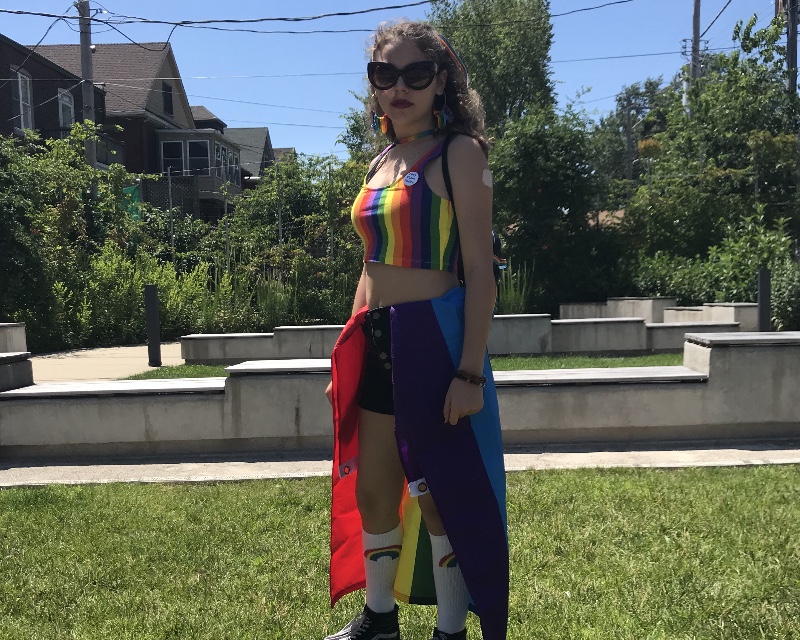 Freshman Rainier Neuwirth-Deutsch poses with a gay pride flag wrapped around their waistband while getting ready for the parade to begin. They covered their outfit with rainbows from head to toe. “[The LGBTQ+ community] is so welcoming, you never feel out of place,” Neuwirth-Deutsch said.

Freshman Rainier Neuwirth-Deutsch’s experience and advice on coming out

“I’ve known since I was really little. I’ve just never had an attraction to guys. I’ve never thought of dating guys. Then I found out there was a word for that in fifth grade.”

Freshman Rainier Neuwirth-Deutsch falls somewhere on the gender spectrum between male and female. They identify as non-binary and gay, coming out to their friends and family when they were 11 years old.

Their parents responded well to the news, apart from their dad being slightly confused. Their mom and sister are also part of the LGBTQ+ community, so Neuwirth-Deutsch felt they understood what they were feeling.

“My dad just didn’t understand. But he now understands. He always stands up for me and he always goes to Pride with me,” Neuwirth-Deutsch said.

Neuwirth-Deutsch came out to their friends one by one, but still received backlash from peers and adults.

No one would talk to me. No teachers. No counselors. No one,”

“I went to a really small school and this girl decided she was mad at me and told the entire school I was gay,” Neuwirth-Deutsch said. “The entire school, for two weeks, ignored me. No one would talk to me. No teachers. No counselors. No one.”

“West is a lot more supportive about that kind of thing. There are banners everywhere saying that you are appreciated and you are welcome. There’s [also] a club here for people who are in the LGBTQ+ community . It’s a lot more welcoming,” Neuwirth-Deutsch said.

Neuwirth-Deutsch is able to go to football games and other school activities with their girlfriend of seven months.

“[My girlfriend] makes me feel very happy and successful in what I’m doing. They praise me [in] ways of telling me [that] I’m going to be okay and it’s okay to feel certain ways because they have felt that before as well,” Neuwirth-Deutsch said.

Just go with your gut because there [will] always be people that will support you, no matter what and never turn their back on you,”

Since Neuwirth-Deutsch is non-binary, they like to experiment with how masculine or feminine they present themself each day.

“I feel like everybody has both [masculinity and femininity] in them, they just pronounce it more in their clothing, and how they wear it,” Neuwirth-Deutsch said.

Neuwirth-Deutsch believes in self-expression and wants to make sure everyone feels comfortable in their own skin.

“Just go with your gut because there [will] always be people that will support you, no matter what and never turn their back on you. Just find those people to talk to,” Neuwirth-Deutsch said. “Just be you. Don’t think of what people are going to think of you. Be yourself and just don’t care about society or what they think or what they say.”