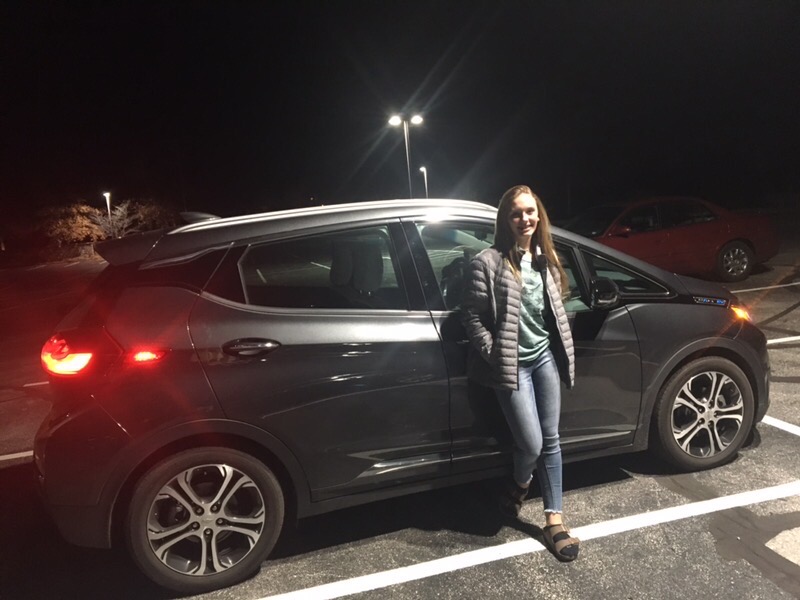 Freshman Ashlyn Gillespie stands next to her family’s electric car in the parking lot. Her family invested in this car so that they could be more environmentally-friendly. “I honestly hope that my family and I can show people it’s not weird to get an all-electric [car] or a half and half like the Prius. If that kind of car is in my price range then I do hope to get an electric car as my first car,” Gillespie said.

From owning an electric car to a home garden, the Gillespie family invests in reducing their carbon footprint. Freshman Ashlyn Gillespie and her family are taking the next step in helping the environment by having solar panels installed at their house.

The 22 solar panels are expected to be installed by December.

“Last week, we signed a contract, and they put in the order for the panels themselves. They don’t just keep a giant warehouse of [the solar panels]. When you ask for stuff, they put in an order, and when it comes in, we’ll schedule the exact time they are going to come out,” Ashlyn’s father Josh Gillespie said.

In addition to helping the environment, the solar panels are expected to reduce the yearly cost of electricity.

“Really though, [cutting the electrical cost] isn’t a big factor. I don’t think there was a single event that made me environmentally conscious. I think if you were to chart my life as a journey you’d see lots of small events and decisions nudging me that direction,” J. Gillespie said. “I was raised to believe that humans have a responsibility to care for the environment, and my life experiences have reinforced that.”

I was raised to believe that humans have a responsibility to care for the environment, and my life experiences have reinforced that,”

By using solar panels, the Gillespies are trying to do their part in reducing the impact of global warming.

“I do believe that we are experiencing climate change as a result of human activity. I think the science there is pretty overwhelming. Unfortunately, climate change is the kind of problem that feels so big that individuals are not sure how to help,” J. Gillespie said.

J. Gillespie considered solar panels when he saw them at Claymont Elementary school and the Ballwin Municipal building.

“It is not silly or ugly to have solar panels on your house. Other people [need to] take similar steps because that is the only way we are going to fix things–through everybody taking action. No single person’s actions are going to make that big of a difference but an aggregate. I hope we can turn things around,” J. Gillespie said.

Solar panels, an electric car and a garden are ways the Gillespie family reduces their carbon footprint.

“Honestly, I think [pollution] already is impacting everybody, we just don’t think about it because it’s a worldly thing and it’s not in our lives, but it is,” A. Gillespie said. “I feel like, cliché as it may be, I’m a part of something bigger. If I see an electric car on the road or solar panels on the roof of a house, I feel like I can relate to that random person in a way I couldn’t before.”