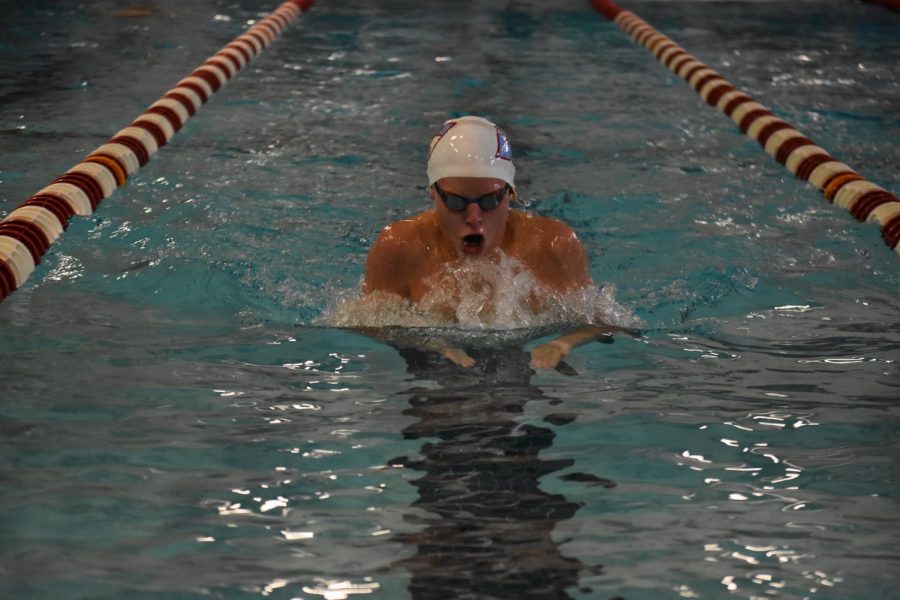 Sophomore Will Bonnett finishes a lap of breastroke during a home meet versus Parkway Central. Bonnett focused on gaining strength outside of the pool to aide his transition back into the water after healing. “I feel like I was able to build more muscular strength while out of the pool, and I was able to put in a lot of endurance work in the water to help get me back to my past endurance level,” said Bonnett. “Both of these things combined together to help me perform better than I ever have.”

Will Bonnett: from surgery to state in one swim season

At the beginning of boys swim season, sophomore Will Bonnett imagined he would be training for the first meet with his teammates, not in recovery after emergency ear surgery.

The surgery, originally planned as a postseason operation, grafted skin from behind Bonnett’s ear onto his eardrum to help his ear heal back together. This forced Bonnett to recover outside of the water for the first half of the season. Despite the challenge, Bonnett still strived to work for his goals.

“He committed to come to practice every day and work hard in the weight room. We came up with a plan to keep him strong and ready to come back to swim workouts,” swim coach Coleen Sumner said. “Will is a good athlete, so he agreed to do dryland that included a mix of cardio and resistance training. Will is a smart swimmer who knows what he needed to do while waiting for swim clearance; we could trust him to do the workouts with a good effort so he could come back and compete.”

Bonnett continued contributing to the team despite staying dry for nearly four weeks.

“It was a different experience for me because I’ve always been in the water, so being able to be more on the team aspect was better for me because I started to realize this isn’t just me, it’s a team,” Bonnett said.

Nearly a month after surgery, Bonnett was cleared to help the team in the water once again.

“The first day I got back in the water was the best. I hopped back in, and I was just so excited to swim. And that’s something that, if you do a sport every day, you start to get bored of it and sick of it, but getting back in was such a rejuvenation–it was great,” Bonnett said.

Not only was Bonnett excited for his return, but the coaching staff and his teammates were as well.

“The best part was that day, the whole team watched him get ready with his cap and goggles, and he jumped in as everyone cheered him on… it was a pure joy watching him,” Sumner said. “He went on to swim in his first meet of the season, and in his first event he got his state cut in the 200 individual medley (IM).”

Bonnett’s teammates have enjoyed sharing in his successes, including winning first place in the 200 IM at the conference championship Nov. 6.

This process of healing has given Bonnett the opportunity to reflect on his outlook toward swimming.

Bonnett’s dedication has landed him a full slate of events, including three individual events and two relays, at the state meet Nov. 14-15.

“Will swims with a lot of guts and heart–surgery definitely did not hold him back,” Sumner said. “The team is excited about the upcoming state meet and is filled with lots of hopes to be back on the podium.”