‘Viewed as a mannequin’ 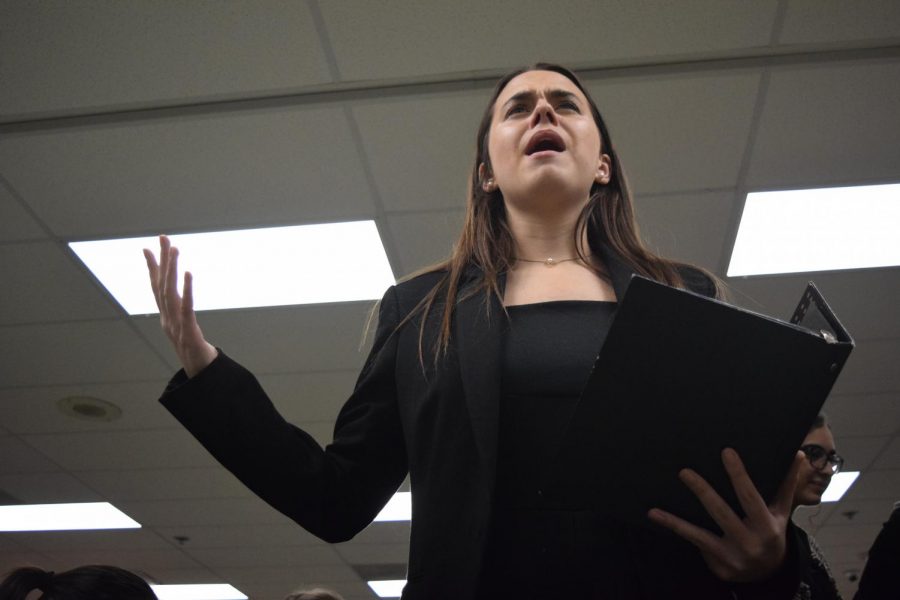 Before the first round of the tournament, junior Grace O’Connor rehearses her Program Oral Interpretation (POI) performance at the Randy Pierce Winter Classic at Pattonville High School Dec. 7, 2018. Competitors create a performance using various published works of prose, poetry and drama around a central theme. “It hurts when people don't listen to your piece because you spend so much time working on it, and you do really pour your heart into it,” O’Connor said. “When people dismiss it simply because of your gender, it's so heartbreaking and for a lot of people it's not worth it [to continue competing]. It's not worth the emotional labor and the aspects of just not being heard because of what you look like or what your gender is.”

Alumna Kristina Humphrey struggles to articulate her reaction into words.

“Are you kidding me?”

As is the case on any Monday following a weekend tournament, members of the speech and debate team flood room 1511 to review their ballots containing feedback from judges. The typical groans over misunderstood arguments and baffling “reason for decision” statements arise, but Humphrey’s judge cited something unrelated to her performance when assigning scores and rankings.

“I wore a red dress, and the judge took off points because it was ‘too much,’” Humphrey said. “There’s a lot of sexualization of girls in debate. Girls have to wear certain things to appeal to judges, whereas guys are fine. It’s just really annoying.”

Borgsmiller sits at her desk as the scene unfolds and students air their grievances. These ballots are nothing new. They only remind her of the times when she too faced the same stringent dress code standard that Humphrey does now.

“I can go even further back because I was a competitor myself. I started competing my freshman year in 1999, and we definitely had to fight it then,” Borgsmiller said. “I remember my coach was like, ‘you will wear this lipstick, and you will wear this skirt’ because you have to fit this role if you want people to even consider what you have to say. It’s not that she was buying into it—she was telling me that if I even wanted them to hear what I had to say to give myself a chance to win, I had to be a part of the expectations for females.”

I’ve gotten a ballot where the only comment was, ‘I loved your top.’ She didn’t listen to what I was saying at all; she was just so fixated on my appearance to where I thought that I wasn’t being heard. I was just being viewed as a mannequin,”

The raucous din eventually fizzles out into milder conversation. Students disperse from their huddle in the center of the spacious classroom to a congregation of desks in the front, a pair of tables towards the back and an office room and supply closet lined along the far wall.

The next weekend–and the next tournament–is already on the horizon. Ahead of the quick turnaround, junior Kathryn McAuliffe is researching candidate privacy laws when her phone rings and a FaceTime request flashes across the screen. Just days before they are slated to compete again, one of her teammates is in a dressing room, restlessly searching for a skirt that would not be deemed too short.

“I can remember being nervous at tournaments about whether or not my dress was too short or if I raised my arms could you see my stomach when I should’ve been worrying about the argument I wanted to make,” McAuliffe said. “It’s another thing that girls have to consider for rounds that guys just don’t have to think about. It’s an added challenge to speech and debate. Instead of focusing on our arguments, intellect and experience, we have to divert energy away from that to make sure our knees or shoulders don’t offend anyone.”

The NSDA’s dress code guidelines instruct competitors to “dress in a way that authentically represents” them. Tell that to Borgsmiller, the 2019 James M. Copeland High School Coach of the Year, and a marked delineation emerges between progressive rhetoric and tangible action.

“Generally speaking, I don’t think a lot of [the NSDA’s] words have meaning because they don’t really back them up well. They say things like ‘dress to your authentic self,’ but then when you watch nationals and you see who’s on that stage, there’s no way that’s what those people look like on a daily basis,” Borgsmiller said. “You look at those girls, not only are they in a very expensive suit with jewelry, their hair is hairsprayed to the nines in a bun, pearls, caked on makeup, and none of that stuff has to happen with the guys. Part of the problem is the NSDA can say this, but then they put judges in the room and the judges make those decisions and that’s who they advance to these rounds. Those are the first things that are perceived about [female competitors] before they even open their mouth.”