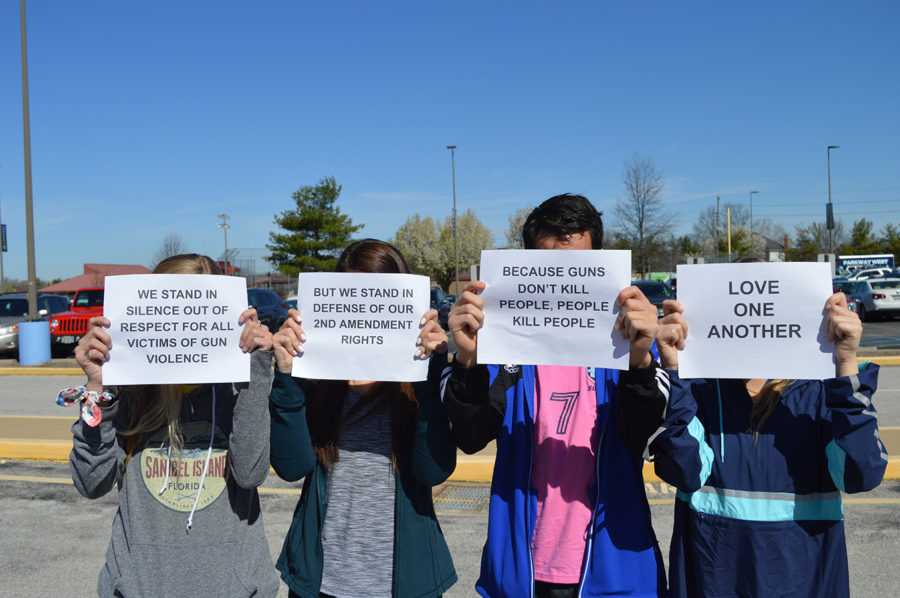 While recent walkouts and protests against gun laws in our community continue to raise media coverage, there is a side to the story that has not been widely shared: those who advocate against gun control rather than in favor of increased security measures.

Students empathize with victims of school shootings and stand against gun violence, but they stand firm in their beliefs regarding second amendment rights.

“I don’t think we should have gun control because guns have always been available to us by our second amendment rights,” sophomore Grace Kroner said. “They protect a lot of people and our military uses them to protect our country and there’s no reason why we should have them taken away.”

Students like Kroner disagree with the March 14 and April 20 walkout and feel that the protest was falsely advertised.

“The walkout was promoted as being a silent 17 minutes to pay tribute to the victims, but instead they made speeches and there was a lot of yelling, and I don’t think that’s the right way to respect the people that died,” Kroner said. “If it had been quiet, I would’ve gone, but I heard that there were going to be speeches and I knew that the speakers would push their ideology on everyone and I didn’t want to participate in that because it’s not right.”

Advocates for constitutional rights disagree with the desire to tighten gun control because they feel that increased gun laws would jeopardize their ability to defend themselves.

“I’m a big believer in the second amendment and I advocate for not only self-defense, but for utilities that you can use a firearm for such as hunting and recreational use, but especially self-defense,” senior Andrew Wachter said. “In the event of an emergency, it’s nice to have those things. You can’t always rely on the police and people to do things for you when you can do it yourself.”

Wachter was one of four students to participate in a silent protest against gun control at the March 14 walkout. The students stood outside of the main gym silently holding signs expressing their opinions on guns in the United States.

“I know that I’m one of the minority, and it is unfortunate, but it’s all the more reason to be strong and firm in my beliefs and stand my ground,” Wachter said. “During the walkout, we had a lot of weird looks. We had one student yelling profanities at us, and she was taken aside and talked to.”

Wachter attributes the rise in school shootings to what he considers modern society’s shifting values.

“I think shootings are a societal thing, if not a mental awareness thing,” Wachter said. “Back in the 40’s and 50’s people came to school with their hunting rifles in the back of their trucks and no one said a word about it. The guns didn’t change, we changed.”

Opponents of gun control believe there are other solutions to school shootings rather than tightening gun laws, such as decreasing media attention regarding the shooter, increasing mental background checks and initiating safety training for gun owners.

“I think that mass media is a problem,” sophomore Jonny Yazdi said. “After a school shooting, the media blows up the shooter and give him a lot of fame and other future shooters see that he got a lot of fame which encourages them to do the same thing.”

Rather than restricting second amendment rights, Wachter believes future tragedies can be prevented by tracing issues to their source. To him, mass shootings are a symptom of a society fractured by isolation.

“Reach out to someone that is in need of help, if someone is distressed or doesn’t have any friends or whatever it may be, go be with that person,” Wachter said. “It’s about reaching out to the people and helping the people.”