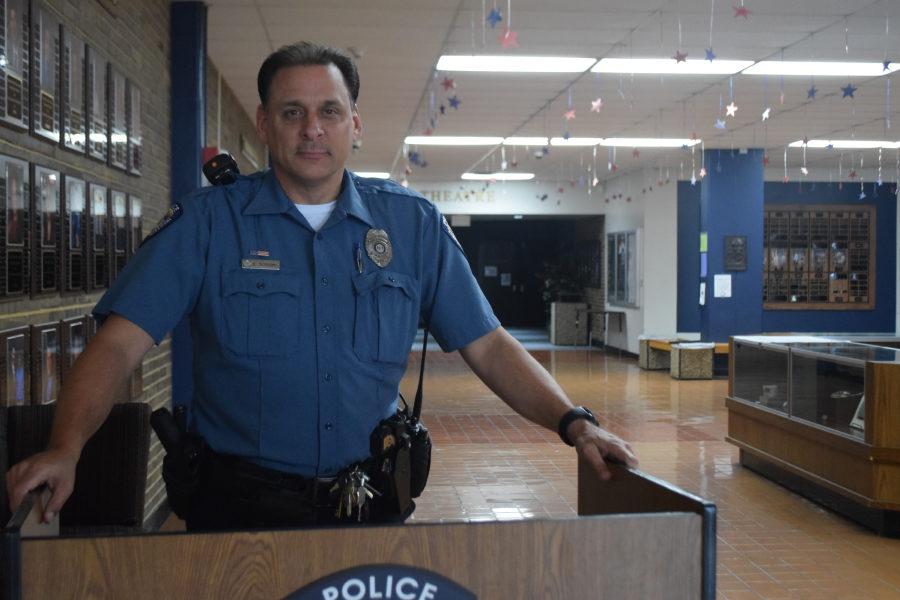 Standing at the building entrance, school resource officer Scott Scoggins works with local police and Parkway officials to keep the school safe. Scoggins worked with the district and administration to be sure that our school was safe today.

2. Breaking news: we are safe, today

A student threatened to open fire at Parkway West on March 1 via a Snapchat story around 10 p.m. last night. Within minutes, the post circulated to hundreds of students. In wake of the Parkland shooting on Feb. 14, which heightened awareness to gun safety, the news of this threat spread rapidly throughout the community.

“In this day and age, [these threats] are taken with the utmost seriousness,” Principal Jeremy Mitchell said. “We immediately took action by calling persons of interest, contacting local authorities and of course trying to get to the bottom of what was going on.”

The post was reposted by several students as well as sent to many more. Students were quick to act on the situation, alerting parents and administrators.

“I was unbelievably appreciative that between the hours of 10:30 p.m. and 1 a.m. last night, I received 30 emails, texts and calls from concerned members of our community,” Mitchell said. “We tried to be informative and transparent about what was going on.”

Police and security increased on campus today, but even with the threat neutralized, over 100 students were marked absent.

“My mother made the decision not to send my sister and I to school. She was extremely concerned due to the results of very recent school shootings, and couldn’t imagine such a catastrophic event at our school,” freshman Arden Dickson said. “It is ridiculous that she should have to have that conversation with us about what to do during a shooting before sending us to school.”

Mitchell believes that this is the reality of our world today.

“What could’ve been a terrible joke a few decades ago is now a serious threat. But this is still a school, not a prison, and many of the kids I have talked to say that this is just the world we live in. It’s a great country and we have a lot of freedoms, and we have to do what we can to protect those freedoms,” Mitchell said. “Thankfully, I believe this was not a serious threat. I don’t understand why anyone would think this is funny or a joke. I value my life. If the threat was real, calling off school was definitely being talked about.”

Some students believe this is an opportunity to make a change and continue the discussion about our school’s safety.

“I think this is a further progression of the need for gun violence prevention and actions taken against gun violence,” sophomore and Students Demand Action spokesperson Sabrina Bohn said. “This really shows the need we have for Congress to take action and students to share their voice. Students were terrified last night and should not have to feel that way.”