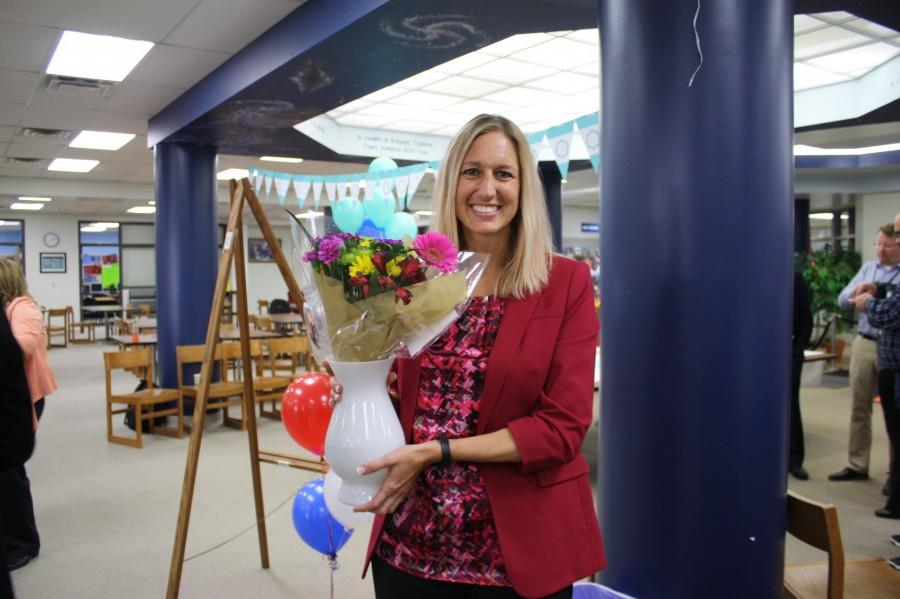 Faculty and students gathered in the library after second lunch on  April 6, to surprise Dr. Beth Middendorf, Principal of the Class of 2017, and honor her with the St. Louis Assistant Principal of the Year award.

“It’s a professional organization called The St. Louis Association of Secondary School Principals [that sponsors the award].  When she was nominated, all of those nominations were sent out to [the board] and then she had to go through an application process,” Class of 2019 principal and St. Louis Association of Secondary School Principals (SASSP) President Dr. Jen Sebold said. “All those applications were gathered and reviewed by the board. We have very strict requirements to earn it and she won.”

Dr. Middendorf was nominated for the award earlier in her career as assistant principal. She finally received the honor after eight years of working at West High. From here, she will go on to compete for Missouri Assistant Principal of the Year with other applicants across the state.

I just can’t think of anybody who is more organized and more efficient, who at the end of the day, always thinks about what is best for the student.”

“I am completely shocked but honored and humbled,” Middendorf said. “I had been nominated once before, probably in my first or second year. It was humbling the first time I was nominated but I definitely think I have grown in my practice a lot since then.”

“I’ve worked with Dr. Middendorf for now almost five years. Our role is testing so it’s very detailed and very serious; you can’t screw up on the ACT, so we work a lot together,” Hornsby said. “I just can’t think of anybody who is more organized and more efficient, who at the end of the day, always thinks about what is best for the student,” Hornsby said.

Beyond the job requirements of assistant principal, the award seeks to honor a person who makes a substantial and outstanding contribution to the school community. Middendorf will receive a plaque, a banquet in her honor and the opportunity to award a $250 scholarship to the student of her choice.

“Really it’s an award that highlights an assistant principal that really stands out in making a difference for their school,” SASSP representative and Lafayette High School Principal John Shaughnessy said.

Members of the junior class also came to the reception to congratulate Middendorf and give their thoughts.

“I was a student aide for her last year and she would always ask me how I was doing and checking up on me, making sure I was okay before she gave me jobs,” junior Hannah Bozue said. “She’s pretty cool.”