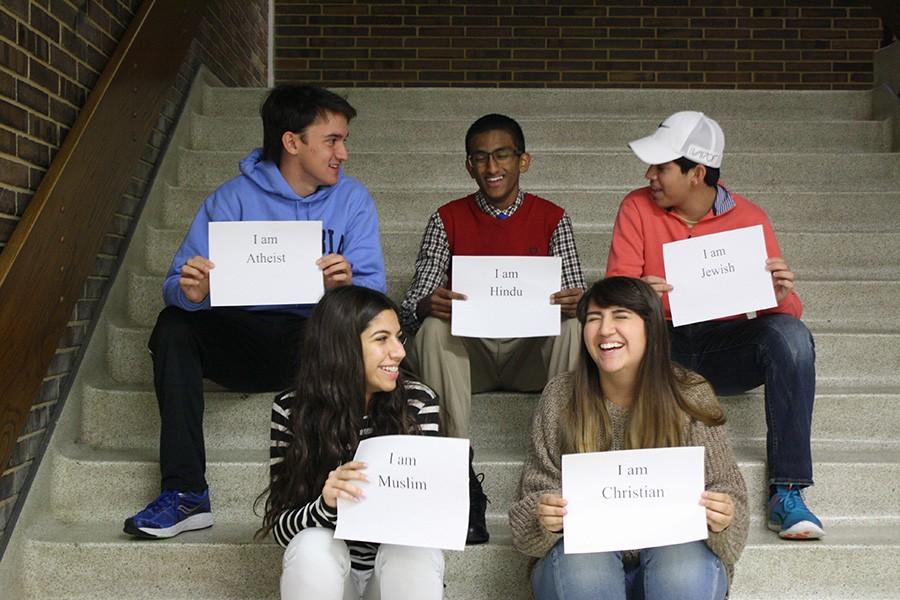 Religion’s presence in public school cannot be denied, but its implications are vast and often overlooked. Is West still an environment where students are allowed to freely speak their minds, or does discussing religion hinder educational advancement? In a public school where tolerance is the norm, five students, all of different belief systems, divulge how their religious and moral practices implement themselves in their academic lives and beyond.

Describe what your religion look likes in your life on a daily basis.

“I have to pray five times a day,” sophomore and Muslim Dana Alshekhlee said. “Usually, I get it done after school because I don’t have time to do it during school. Also, I used to go to a mosque Saturday school, but now because of school, I don’t have enough time.”

“Days of the week, I don’t do too many religious things till Friday night and Saturday night which is called Shabbat,” freshman Ethan Golde, who is Jewish, said. “Orthodox Jews don’t use technology, [so they] turn off the heating systems in their houses and only walk places. For me, it’s more like I try to attend services Friday and Saturday, and we have a family dinner every Friday night. Overall, it’s really important to me, but it gets pushed to the side when I have a lot of things going on in my life. It’s mostly an out of school thing for me, but it influences the decisions I make.”

“I’m not religious. I’m atheist, you could say,” junior Grant Aden said. “Whenever someone asks me about religion, I tell them there are two parts to it: the part where you believe there is a creator and a higher power and you choose to follow that and all the stories that go along with it. But the second part is the ideas behind the religion—giving, family, community—I do enjoy. I try not to concern myself with the belief part of religion because I feel for me to live the best life I can, it would be best for me to focus on the relationships I can physically touch in the sense where the stories and legends can’t be proven, so I would choose to interact and enjoy with relationships with people I know are real—which are right in front of me.”

“I’m Hindu,” freshman Bharat Sreekrishnavilas said. “What that means is that it is a polytheistic religion and we have a pantheon of gods that we worship and we pray to certain gods if we want certain things.”

“My dad is the pastor at my church, so I’d say I’m pretty religious,” sophomore and Christian Bethany Conway said. “I practice my religion at home and at school, and basically in all areas of my life. Usually I pray a lot to relieve stress or when I’m feeling grateful or when I’m having trouble with something. I read my Bible daily. Fridays I go to youth group with my church and we talk about our faith and connect, and Sundays I go to church and listen to the sermon.”

Should religion be talked about in school? If so, in what contexts?

“Definitely. I think people should be more open to [religion]—especially my religion in America right now with ‘Islamophobia.’ People should just be more open and see what [Islam] actually is, rather than what they see on TV,” Alshekhlee said.

“Religion should, in theory, further education in the classroom because it broadens individuals’ awareness to all major world religions—Christianity, Judaism, Islam—but if discussions about religion are talked about in classes where it is not pertinent, religion acts as a distraction because it is taking away from the set curriculum,” Aden said.

“I think you should be allowed and open about practicing your religion in school because it’s a major part of who you are. I’m always open to talking about my faith with anyone who has questions because I love to share my religion with anyone who is willing to listen because it’s something that has affected my life so much. However, because everyone has their own different religions, it’s extremely hard to bring them all together in one environment. Personally, I would love for our school to be such a place where we could do that and I can freely live out my Christian lifestyle,” Conway said.

Describe a time when your religion (or the lack thereof) came up in class or in a social situation outside of school. How did it make you feel?

“I’ve never been discriminated outright, but my grandmother has. She works at Macy’s and I guess she was being really nice to a customer and the customer said, ‘Don’t tell me you’re Muslim!’ As if she was surprised that a Muslim could be nice,” Alshekhlee said.

“When I was 13 I had my Bar Mitzvah and all of my friends came. They came to the service, and though they didn’t understand most of it and most people’s favorite part was the party, I had some friends who genuinely thought my traditions were cool,” Golde said.

“Last semester, I was in government class and I was asked a question about Christmas trees and I responded that they were not a religious symbol. After [my teacher] asked some questions about my answer and I did some explaining, I told him I was atheist. Just about the entire class turned their nose and looked at me in surprise and moderate disdain,” Aden said.

“I have never run into any problems about being any kind of religion or anything, so there has really been no need to talk about it,” Sreekrishnavilas said.

“In my English class, we are writing controversial research papers and I’ve been told not to write about a topic that isn’t too touchy, but it’s hard because many of the things I want to say are based on my Christian views and I can’t just change how I see the world just because my opinions may not be agreed with. My aim in sharing my views is certainly not to upset or offend anyone; nonetheless, my Christian faith is part of who I am so it’s frustrating not being able to have my views accepted,” Conway said.

What is a teacher’s role in the classroom when it comes to talking about religion? How do they address it and should they be allowed to talk about their personal faiths? Why or why not?

“I don’t see a huge problem. I personally wouldn’t mind hearing another teacher’s personal viewpoints. I mean if a teacher doesn’t want to share it, then it doesn’t matter and they don’t have to, but if they want to there shouldn’t be a problem with it,” Alshekhlee said.

“There is definitely a fine line between talking about it and expressing your views. It’s fine to bring up the subject when it’s related to the class, but if the teachers starts telling students what is morally right and wrong, it’s not okay anymore,” Golde said.

“For public schools there shouldn’t be a set upon religion; private schools like CBC and Westminster, however, can do whatever they want. West High teachers, who embody the state in this instance, must be separated from the church for a better education for all,” Aden said.

“It’s a fine line between when teachers are just talking about [religion] and when they are preaching. I think what the state says should be taught should be taught by the teachers,” Sreekrishnavilas said.

“Teachers are afraid of offending students because nowadays teachers can get fired for any little thing they are doing that may be controversial,” Conway said.

Describe the atmosphere towards religious tolerance at West. What do we excel at? What can we improve upon?

“[West] is a diverse place for the most part; people are pretty opened minded. There could be a select group of people who are not the most accepting, but for the most part it is not that bad,” Alshekhlee said.

“It is a pretty good community at West. Sometimes you hear people making jokes about things they have no idea what they are saying, but overall it is pretty accepting,” Golde said.

“I have friends, when we talked about evolution in biology class sophomore year, that found it difficult to learn about evolution because it goes directly against their beliefs just like if I was forced to take a very strong religion class. That is definitely something West needs to work on, just having a grasp on all of the individuals’ needs here and not putting them into uncomfortable situations,” Aden said.

“We have a really good community here at West. Everyone is real tolerant,” Sreekrishnavilas said.

“I’m not sure if we can completely overcome the conflict religion causes. Of course we want school to be a place where everyone is friends and is learning new things, but it is extremely difficult because everyone’s values on life are so different. It would be great if there was a way [to make West a religiously tolerant place], but I feel like we would have found it by now,” Conway said.