Senior Jack O’Connor asked Claire Dreller to Homecoming by painting the question “HC?” and putting a cut out picture of his head on her car. [Alex Karrenbrock, 12] 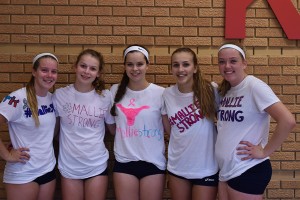 On Friday during second lunch, senior Hassan Baig asked senior Lauren Sanford to Homecoming by playing “The Real Slim Shady” by Eminem over the speakers in the cafeteria. [Peyton Gaskill, 9]

Sister of P.E. teacher Katelyn McCreary, surprised her with flowers and a cookie cake for her birthday during blocked sixth and seventh hour P.E. class on Friday. Students broke into song while McCreary laughed claiming she was “too old for the Happy Birthday song.” [Trinity Norris, 9]

Varsity golf wins at Lindbergh invitational tournament with a score of 356. Senior Rebecca Su scored 14th place with a score of 79 on an 18-hole course. [Ashley Spillmann, 9] 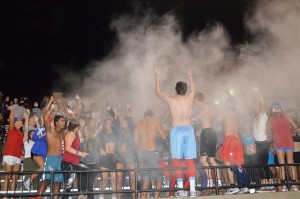 Maddie Cooke
Baby powder was thrown in the air by the student section while chanting the “I Believe” cheer at the home football game Friday night against U City. -Haley Tiepelman (11)

WOW had their second meeting that was homecoming themed. Tutorials of good versus bad makeup were demonstarted, and junior Kaliegh Riggs was given the bad tutorial! [Claire Dreller, 12]

The Parkway West marching band performed their show “Poltergeist” for the first time at the varsity home game on Septe. 11. [Justin Cupps, 9]