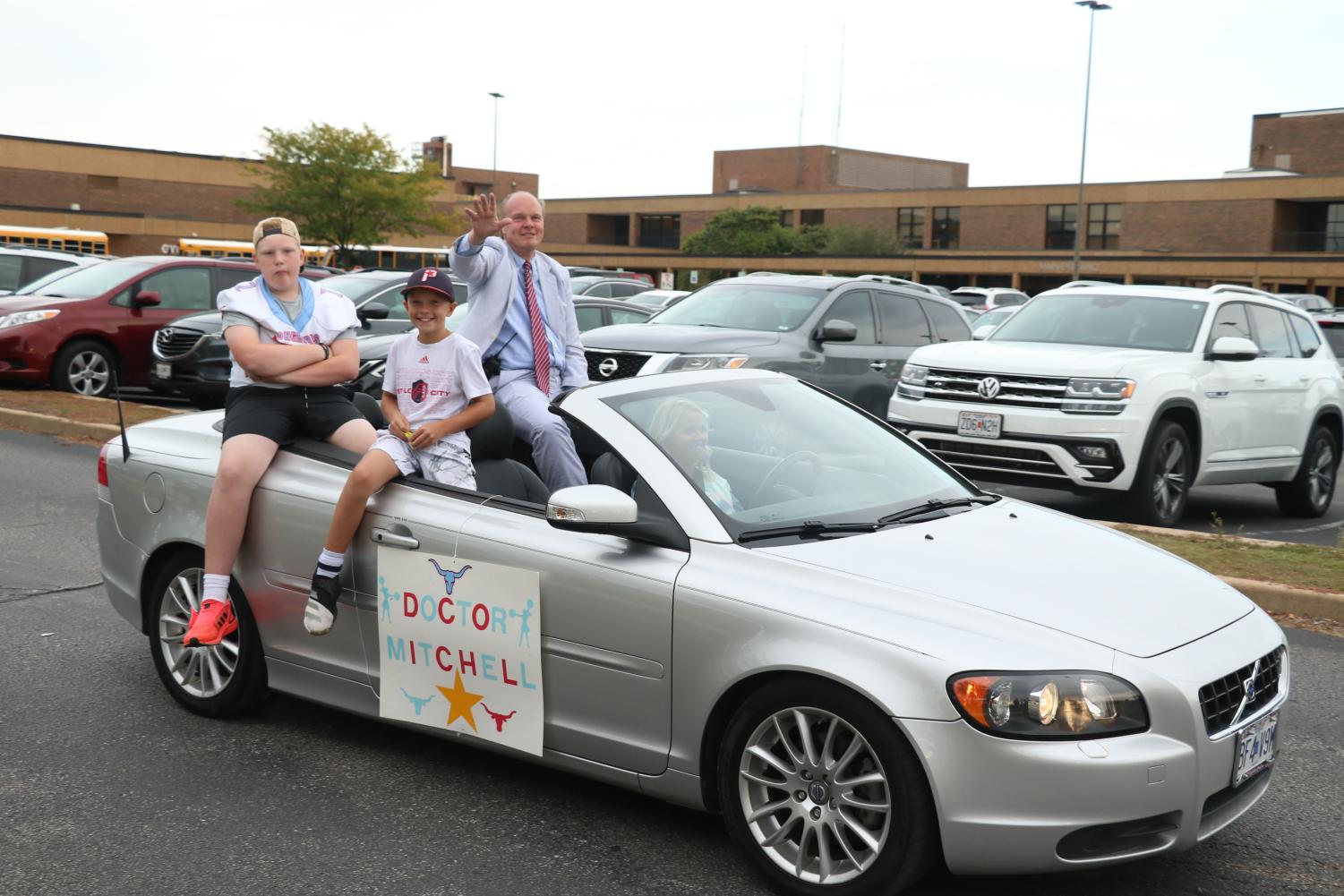 Principal Jeremy Mitchell sits in his homecoming float and waves to the students lined on the sidewalk for the homecoming parade. During homecoming week, he enjoyed getting to build connections with students. “I couldn’t have asked for anyone better to work for,” Athletic Director Brian Kessler said. “[He] pulled off homecoming, [when] nobody knew what it was going to look like. It happened, it was great, it was beautiful, and [students] loved it.” (Photo by Paul Griswold)

Principal Jeremy Mitchell sits in his homecoming float and waves to the students lined on the sidewalk for the homecoming parade. During homecoming week, he enjoyed getting to build connections with students. “I couldn’t have asked for anyone better to work for,” Athletic Director Brian Kessler said. “[He] pulled off homecoming, [when] nobody knew what it was going to look like. It happened, it was great, it was beautiful, and [students] loved it.”

After a 28 year long career in education, including 12 years as head principal, Dr. Jeremy Mitchell announced his plans to retire in July. Read on to learn more about his journey and his contributions to the West High community.

The decision came after his wife passed away in August 2020, leaving Mitchell a single parent for his teenage sons: 17-year-old Jake and 16-year-old Sam. Mitchell believes the most important thing he can do is be available for his family.

“With the reality of moving to solo parenting and [having] a lot of family support, I decided to [finish] one more year. I realized closer to homecoming that I [needed to] retire,” Mitchell said. “I was missing all this stuff [at school] because I was going to [the kids’] stuff.”

“[Former principal Beth] Plunkett was a legend, and rightfully so. She’s a great leader. I remember coming in here, thinking, ‘Oh my gosh, this is just me. How do I keep up with that?’” Mitchell said. “On the first day, I had students coming in [my office] and comforting me and getting to know me. This place is a caring, wonderful, high achieving place [and] I’m going to miss it.”

According to Mitchell, he felt intimidated following in the legacy of Plunkett. However, he wanted to keep the school as it was while learning about the community and what mattered to the staff and students.

“This is a high achieving high school. [It] stands out in the area. So I didn’t want to mess it up. I just had to be myself,” Mitchell said.

Plunkett’s parting words encouraged him to assume positive intent in the actions of others. According to Mitchell, he took this advice to heart and has used it to guide his career and personal life

“It applies whether you’re at work or church or wherever. You need to assume positive intent and understand why people say things, even if you disagree. It helped me through the last 12 years,” Mitchell said.

One of the first changes Mitchell instituted was eliminating the strict no phones policy. Instead, he allowed phone activity to be determined by the teachers. Additionally, Mitchell helped create new programs, such as SPARK!, offering students a hands-on approach to learning.

“He came to us with a lot of skills, and the building grew in different ways. [As an admin,] one of his strengths [is] he lets people do their own thing [and] he respects us as professionals. [We] didn’t have to be worried when we were around him; he always made us [feel] at ease,” librarian Brian Welch said.

In addition to his years of experience as an educator, Mitchell also coached tennis softball and his kids’ basketball and baseball teams.

“He understands our climate and our culture, and he implemented things off of his value system,” Kessler said. “I saw him morph to understand what was important to our community and certain things that are important to him. Then, he found a way to intertwine the two to make Parkway West an even better place than before he got here.”

Meetings on topics like mental health awareness and support for minorities make the Parkway community a safer space for all students, which is something that staff members would like to see continued after Mitchell’s retirement.

“This is a community where we are in it together, and we want to know peoples’ concerns and celebrate successes. I have seen that grow over the time I have been here,” Assistant Principal Mario Pupillo said. “His impact will carry on for a long, long time. He was here for 12 years, and there’s a whole lot of us who will continue to be here, and so that impact will continue to be felt.”

As the COVID-19 pandemic continues to challenge the educational system, Mitchell believes that a fresh perspective in his position will be best for the community.

“It’s good for any organization or school to have a fresh voice. I feel like the teachers, the other administrators [and] the students are just awesome. I think it’s the best high school job that I know of,” Mitchell said. “If we can bring somebody in who can match that energy and effort and ability level of everybody else around, I think that makes a lot of sense. It’s a good time for a fresh and different voice.”

Even as he transitions out of his role, Mitchell plans to attend football games and concerts after he retires. He hopes to maintain his connections and positive impact on the school. Additionally, Mitchell hopes the new principal gets to know the community before instituting change.

“Don’t discount what the students and teachers tell you. They know stuff about this school, and when you’re brand new, you don’t,” Mitchell said. “I’m sure the new person is going to have their ideas, and that’s great, you should have ideas, and you should look at those ideas. But, make sure that you listen to what the kiddos tell you and what the adults tell you because they’ve lived it, and they know.”

Mitchell’s plans for the future include helping his oldest son, Jake, transition into college and beginning the college search with his youngest, Sam.

“It has been a really great journey. Anytime you spend 12 years somewhere, you have all kinds of roller coaster rides. You have good times, bad times, but here, the bad times were never that bad, and the good times were really good,” Mitchell said.

Principal Jeremy Mitchell has decided that it is time to pack up his colored pens, shut off his walkie talkie and move on to the next chapter of his life with his family. From participating in the Senior vs. Staff Basketball Game to bantering about Fantasy Football to showing off his cowboy boots during homecoming week, there are many memories staff want to share with Mitchell.

Athletics Director Brian Kessler has been friends with Mitchell for over twelve years. Kessler was working at West before Mitchell was hired and encouraged him to apply for the position as principal.

“He’s been my boss for longer than anybody. I felt kind of lost [when I heard he was retiring],” Athletics Director Brain Kessler said. “I didn’t know what I was going to do next, and I still feel that way. He’s meant a lot to me, and I couldn’t have asked for anyone better to work for.”

Assistant Principal Kate Piffel has closely worked with Mitchell for eight years. However, she believes it’s the little things like his dad jokes that she will miss the most.

“He likes to act like a grandpa to the rest of us, but he is only a year older than me, and we call him out on that all the time,” Piffel said. “When we would have our team meetings on Monday mornings, I always appreciated the sports talk about the weekend games and fantasy football. He and I like to throw political jabs at each other, but it truly was all in [good] fun.”

In response to principal Jeremy Mitchell’s retirement, students thank Mitchell for their memories in high school. Additionally, students talk about lessons that they have learned from Mitchell.