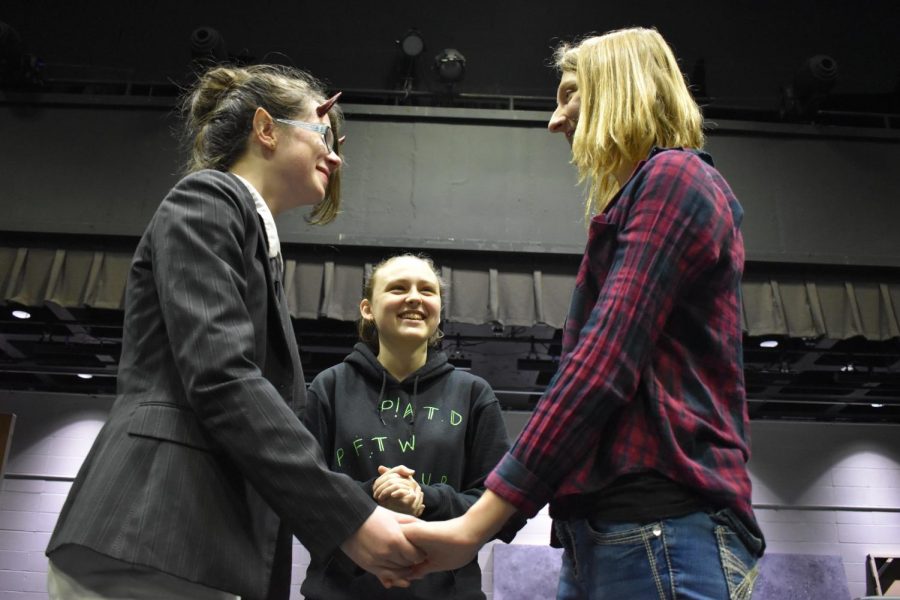 Listening to junior and unofficial marriage officiant Gillian Davis, senior Seaira Knight and junior Lana Hughes practice for their “wedding.” Having met in middle school, Knight and Hughes developed a close, platonic relationship that became mistaken as romantic over the years. “Everyone thinks we’re dating, so it became a joke. [On] Valentine’s Day, it became a fake proposal. That’s how the whole ‘marriage joke’ started,” Hughes said.

For most, marriage is a union between two people who love each other romantically and wish to legally bind their relationship. For senior Seaira Knight and junior Lana Hughes, marriage is the union and celebration of two best friends.

Knight and Hughes plan to wed in the theater at 7:05 a.m. Dec. 20. This wedding will not be legally ordained.

“It’s going to be a comedic kind of thing,” Hughes said. “We’re just friends. We’re really close–I would say [Seaira] is more like a sister than anything. She’ll hold my hand [when] we walk around. Everyone thinks we’re dating because usually when people see others holding hands, they assume that. We started joking about it because people would always say ‘you’re so cute together.’”

This is not the pair’s first time “getting married” to each other. Taking the relationship misconception to the next level, a few years prior Knight proposed to Hughes on Valentine’s Day, solidifying the idea for their first wedding hosted in the Peace Garden.

“Some time after, I asked myself ‘what if we had a bigger wedding?’ I wanted to do it on Valentine’s Day [next year], but I won’t be here,” Knight said.

Knight will be moving to New Zealand Jan. 6 following her early graduation to study marine biology in college and stay with her father’s side of the family. She was originally skeptical of if the second wedding could happen in time. Upon hearing Knight’s idea, her debate class helped plan an earlier ceremony.

“Since she’s leaving, we decided that this would be a really funny story for college. I keep hearing that people think we are legally getting married–we’re not,” Hughes said. “This is pretty normal for Seaira and me. My friends are just like ‘this is just them being them.’ My teachers’ reactions are really funny, and people have been weirdly excited about it.”

With news of the wedding spreading around school, Knight is comfortable with the attention.

“I didn’t expect the word to spread so quickly, but I’m fine with the attention,” Knight said. “My entire theme this year is being extra, if you can’t [already] tell from my suit, devil horns and fake ears. I’m used to people staring at me in the halls, mainly asking ‘why does this girl have horns on?’ I’ll have random people in the bathroom ask if they can touch my horns.”

With an official date set for their wedding, Knight and Hughes prepared for their big day by gathering juniors Gillian Davis and Grace Smith to “officiate” and bounce, respectively, and senior Cory Wentzel to walk Hughes down the aisle. A wedding dress was also acquired from Goodwill for $5.

“I think it’s awesome they’re doing this. I met [Seaira and Lana] on the bus in seventh grade when I first came to the school, and they were the ones that were probably the most accepting to me,” Wentzel said. “They’ve been close friends to me for a long while, so getting to hear that they wanted to be a part of something, it was nice to hear from them again.”

Personal invites to the wedding have been sent out, but all are welcome to attend. The reception immediately following the ceremony will be held in the cafeteria.

“I can’t promise there will be enough cake; we only have so much money,” Knight said. “This is like a big going-away party, like a very elaborative, school-involved party.”