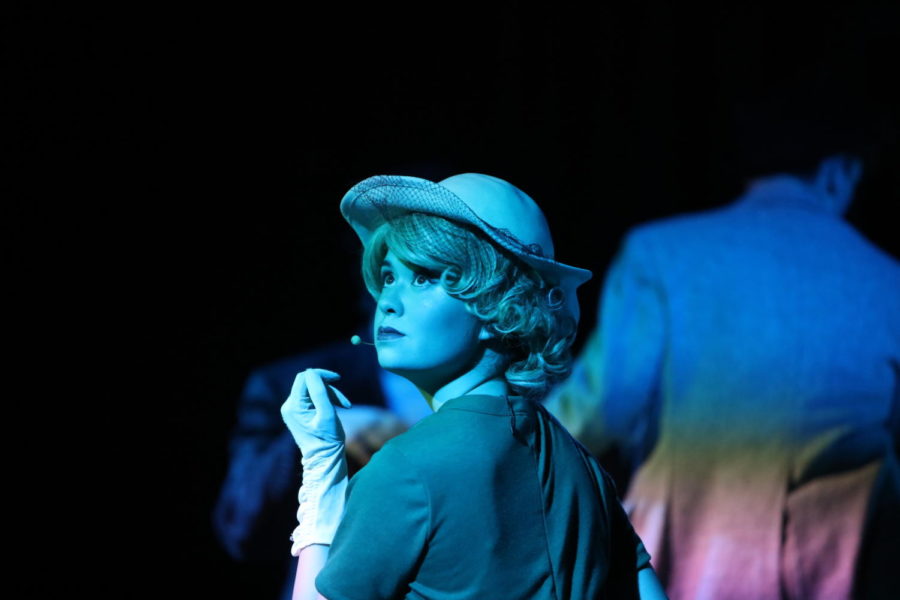 Staring into the spotlight, sophomore Arden Dickson performs in the fall play The 39 Steps. Dickson has been featured in 21 shows since she began participating in theater five years ago. “The arts are creating something out of nothing, based purely on what is inside of you,” Dickson said. “STEM subjects emphasize technicality, memorization, and what people don’t realize is that art is just as, if not more difficult. Art is creating something completely new based on what is going on inside your head, which, I guarantee for everyone, is a hot mess.”

What career are you pursuing?

I really want to go to a Conservatory Performing Arts college and get a Bachelor in Fine Arts (BFA) in either acting or musical theater, preferably musical theater. Those programs are really hard to get into, but that’s what I’m striving towards.

Have you ever felt judged because of your plans to pursue a career in the arts?

I remember one day I was getting coffee with my sister, Emily, and we struck up a conversation with an older couple. They asked what careers we wanted to pursue once they figured out that we were high school students. Emily said, “I want to go into nursing, I’m going to Rockhurst.” They commented on how amazing that was and then turned to me and I told them I want to pursue a career in performing arts. They nodded and then turned back to Emily and told her how great of a career nursing is and continued to talk to her about that. That is a really good example of how people respond to the arts. Lots of people think that it’s a “phase.” They don’t understand how rigorous and intense these programs are. First, we’re greeted with this denial of the fact that it’s a career, and, after we explain that it is a career, we’re told: “It’s not going to be you, you haven’t had enough training, you’re from Missouri.” It’s a double negative in that aspect.

How does it feel to be an art student in a STEM-focused school environment?

Art programs, specifically the theater, will be given little funding while athletics are very highly funded which reflects the focus at West. The issue is not only funding but the social stigma surrounding art careers. A STEM student is often seen as more intelligent than an art student. If someone says that they love math and science, people will consider that person very smart, but if an art student says that he’s just finished a photo project that he’s been working on for a very long time, the importance of it will be disregarded.

What challenges do you face while pursuing your career during high school?

Time management, as of late, is something that I’ve been struggling with a lot. I’m starting to tweak my schedule around theater which is hitting me in the face with the reality of it. I’ve had to drop this and that so I can maintain the love and passion of what I want to do. For a while, I was involved in a few different school clubs on top of the theater, and recently I decided to let those go. They weren’t things that I was truly passionate about and they were degrading my health because it just got to be too much. I’m not diagnosed with anything, I’m just a kid, but the stress that comes with balancing it all is immensely suffocating. Especially as a student, we’re very angsty and unstable, it’s difficult to navigate through the realm of being professional and being a kid and trying to learn and grow the same way that other kids are.

What advice would you give to other students pursuing a career in the arts?

Don’t think of yourself as a lesser student just because you excel in the arts. In truth, art is such a huge part of our culture. When you look at a society or a culture, you may look at their statistics regarding technology, innovation and intelligence, but what makes a country a country and a school a school is the art, the diversity. To creative students, I don’t want to say cut yourself some slack, but understand your strengths and the importance of them in our school and in our society.