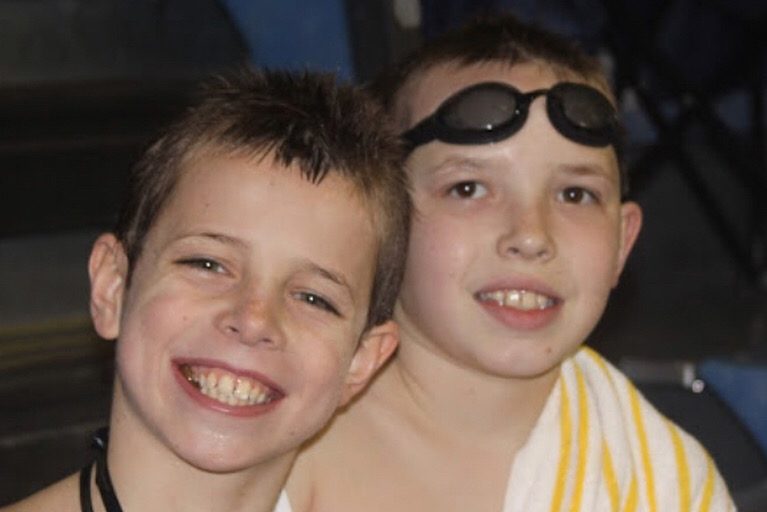 2016 graduate Drew Bonnett and the late Joe Ross pose for a picture at a Parkway Swim Club swim meet. Bonnett and Ross swam together for many years and grew up as best friends. “Joe was a light of joy and laughter,” Bonnett said. “I loved him and respected him deeply.”

4. In memory of Joe Ross

Alumnus Joseph Alan Ross passed away on Jan. 20 at age 19, while studying economics at the University of Chicago.

Joe, as he was more commonly referred to, graduated in the class of 2016 as the president of the Math Honors Society, Mu Alpha Theta, and was a member of the Science Honors Society, Beta Chi Phi. While enrolled in AP Physics I with Ellen Wilke, he decided to start a Physics club with a few of his classmates.

“Joe got material together for them to work on every time,” Wilke said. “That bunch [Physics club members] all got fives on the AP exam…[and] probably gained five pounds too, because food, of course, was an integral part of Physics club.”

Ross was more than just a good student; he impacted his teachers and classmates through his light-hearted and easy-going attitude.

“Joe was one of a kind. He was always so happy, so cheerful, and he had such a contagious laugh,” Wilke said. “I can still hear it.”

Ross’ teachers noticed how he always went out of his way to help other students. He was always willing to lend a hand and was always curious about other people’s lives.

“Joe was one of my best and hardest working students ever.  He could have been happy with that, but Joe was the first one in class to offer his help and insights to another student who may have been struggling,” former tennis coach Jason Townsend said. “Joe would just be interested in listening to them share their ideas.

While serving as president of Mu Alpha Theta Ross founded Ferguson Youth Tutors (FYT), a group of student tutors whose goal is to help people who are less fortunate financially. He continued with FYT while applying for the Ivy League, upper tier colleges and excelling in multiple AP classes.

He always kept me smiling and reminded me that he would always be there. Joe Ross was my amazing best friend and brother who I loved so very much,”

“He had a kind heart and wanted to help everyone possible,” fellow 2016 alumni and friend Kristen Petersen said. “He wanted everyone to receive a good education.”

In addition to his extensive involvement in his academics, Joe was also a compassionate friend who made time for others. Petersen recalled Ross spontaneously taking her out for coffee whenever he happened to have free time.

“Whenever we went on our coffee dates to Dunkin’ Donuts, he insisted on driving and paying for me every time,” Petersen said. “He always extended a hand even when he was extremely busy.”

Students from across the country reached out to share stories about their late friend, including other 2016 graduates like Petersen.

“Joe Ross was one of my best friends all throughout high school,” alumni Zarah Habibollah said. “He was the one person I could always count on for anything, whether it was a homework question or just someone to vent to.”

Habibollah recalls Ross helping her through the loss of her grandfather when they were in high school.

“He always kept me smiling and reminded me he would always be there,” Habibollah said. “Joe Ross was my amazing best friend and brother who I loved so very much, and will forever continue to love.”

Ross, Petersen and fellow alumni Drew Bonnett were all members of Parkway Swim Club together. Ross swam on varsity boys swim and dive his first two years at West and played varsity tennis all four years.

“[Ross] was part of the best team I have ever coached. Our team finished the year 22 and two and finished fourth overall at state,” Townsend said. “[After three years he had] a winning percentage in singles and doubles of over 80 percent.”

He would make the newest, least experienced player feel like an integral part of the team.”

Ross went out of his way to make everyone feel welcome on the tennis team.

“If a freshmen came into the team, Joe would take them under his wing and make sure they were included on a court with a good group,” Townsend said. “He would make the newest, least experienced player feel like an integral part of the team.  He would give advice to the younger players about tennis, school, and life in general.”

Even after Ross quit swimming, he supported Peterson and others at meets. He showed up at the 2016 girls state swim and dive competition to be a timer with Bonnett so they could cheer from on deck.

“I hadn’t gotten the chance to get a state shirt all four years and was a little put off by that fact,” Petersen said. “He told me I could have his as soon as he washed it, and I was touched he cared so much about getting a senior year memento for me.”

Bonnett was unable to attend Ross’ memorial service because he is currently overseas serving in India on a mission trip. However, his younger sister, senior Sarah Bonnett, remembers Ross always being around while she was growing up.

“When my older brother left for a college summer term, Joe knew how sad I was,” S. Bonnett said. “Joe told me he would spend time with me and would step in as my older brother.”

Ross touched the community in different ways. His impromptu coffee dates, motivation, dedication to helping, strong friendship and pure kindness will be remembered.

“The biggest thing to remember about Joe is his willingness to help other people,” Townsend said. “His sense of humor and playfulness was amazing.”