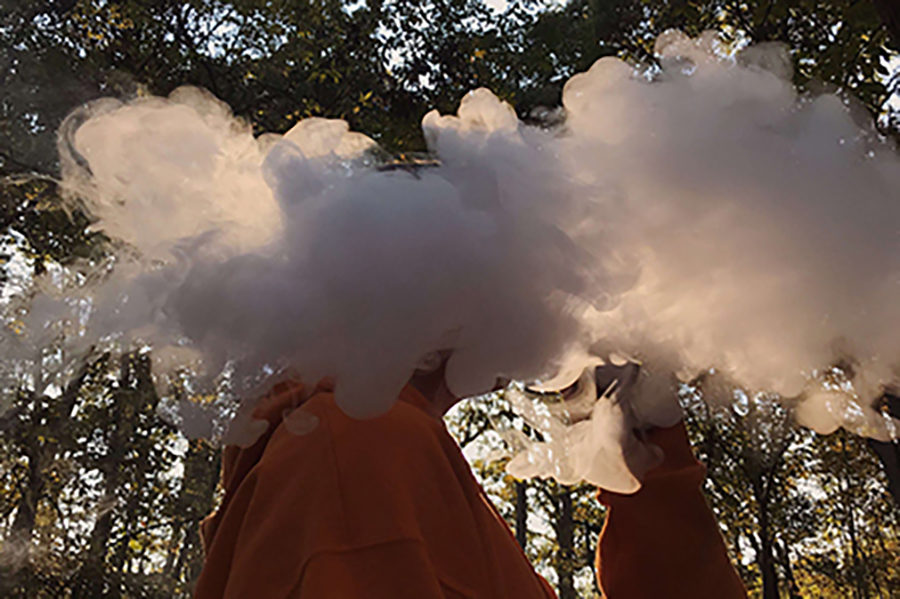 5. Students push faculty to address the issue of on-campus vaping

Monica – This student does not vape and does not approve of vaping. She thinks that the faculty should enforce tighter rules regarding vaping on campus because she finds it distracting and does not think that it is a healthy habit for teenagers.

Students are vaping not only on campus, but in plain sight.

“I vape at school all the time,” Ross said. “When I feel like it I just ask if I can go to the bathroom and then I leave for a few minutes and come back.”

Bathrooms and stairwells are frequented hideouts for kids who want to vape during class, but some are even brave enough to use their vapes in class.

“I do it in the classroom just casually,” Ross said. “I sit in the back with my Juul in my sleeve and nobody pays attention to me. No one ever acknowledges that I’m in the back corner vaping.”

Vaping has become so widespread throughout the school because of how easy it is to get away with it.

Teachers hear students talking about it, but when we only hear it, there’s not much we can do about it. We are powerless in a sense.”

“They [the faculty] don’t ever check the cameras,” Ross said. “They don’t check anything. If backpack checks were legal I think they would find a lot of stuff in students’ backpacks, but they aren’t legal without a search warrant. If they checked cameras they would make everything so much more difficult because you would have to be so much more careful.”

Though many bathrooms are left unchecked, students have been caught vaping in the bathroom by various teachers.

“I caught one student in the act when I walked into the restroom,” English teacher Dan Barnes said. “He was Juuling but not even in the stall, just out in the open. That was my first introduction to it, before that I didn’t even know what it was. I saw him [the student] smoking something so I just took him to the principal’s office.”

Teachers like Barnes feel powerless in their classrooms and in the bathrooms when they hear talk of vaping, but don’t have the visual proof to send a student to the principal’s office.

“The problem is that students are going into the stalls to do it, and I can hear them talking about it,” Barnes said. “But I’m not allowed to break into the stalls to catch them in the act, so it’s a difficult position when you hear it, but you can’t do anything about it because it’s such an invasion of privacy. Teachers hear students talking about it, but when we only hear it, there’s not much we can do about it. We are powerless in a sense.”

Faculty members such as P.E. teacher and High School Hero director Tommie Rowe agree that our school is not doing enough to keep the halls drug free.

“I don’t know that there are any set rules in place, but I hope rules become set,” Rowe said. “Hopefully, through programs like High School Heroes, those groups are going to start informing the district that this is a problem that they need to address.”

Every situation is case dependent, so it is impossible to give a set disciplinary action.”

If a student is caught vaping on campus, there is not a set rule that applies to every student.

Rowe disagrees with this idea, believing that each student should be punished regardless of their previous record.

“We confiscate it and sent the kids to the principal’s office, and after that, it’s up to the principal,” Rowe said. “Your punishment depends on how many times you’ve gotten caught, which is crazy in my personal opinion. Students should be given a two-week suspension and should have to talk to someone about their addiction. Then, they should be reinstated knowing that, if they get caught again, they’re out for 65 days.”

Not every student is on the side of their vaping peers, and these students think that vaping is an issue that the faculty needs to address.

Some teachers, like Rowe, believe that precautionary measures need to be taken to make sure that kids caught with these products do not get away clean.

“It’s going to take someone higher up in the district to say that we’re not going to let our students get away with something like this because it’s becoming such a big issue,” Rowe said.

Without the faculty taking the initiative to stop on-campus vaping, students are left wondering what to do when they see a classmate using those products in class or in the bathroom.

“You can smell it, and you can see it and you know it’s not what they’re supposed to be doing and you want to stand up and tell them it’s not right,” Monica said. “But you don’t want to be the snitch, so it’s an awkward moment where you think ‘What do I do?’”