Last week, miles away from home and surrounded by strangers, eight student journalists interviewed ordinary people on the streets of Los Angeles. Every individual had a story; but it was not that simple to reveal. We struggled many hardships, from our tendencies to be shy to language barriers, but we finally unveiled their stories—the many stories that weave together to form the fabric that is the heart of Los Angeles.

Street performer talks about his calling to the entertainment world 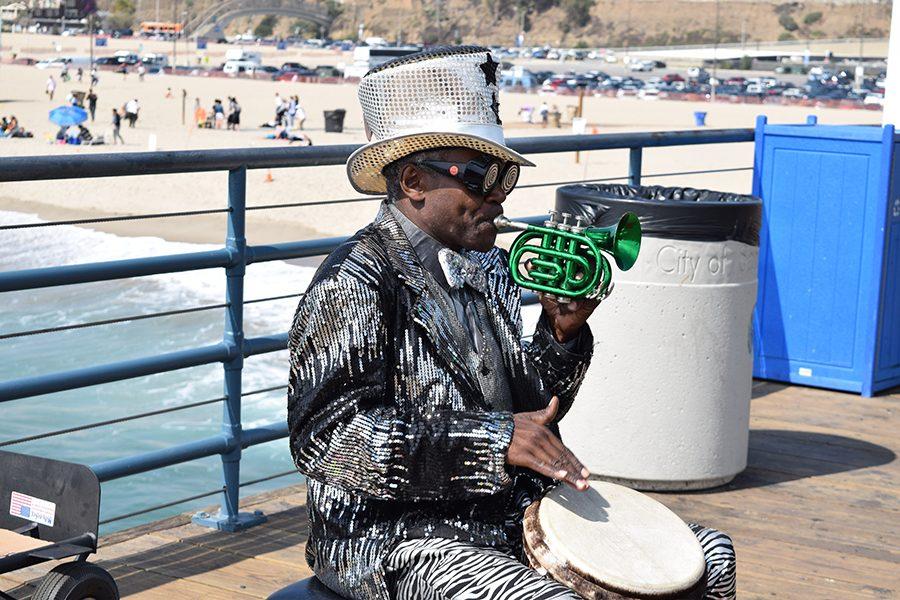 Gallery|6 Photos
Mary Galkowski
Lenny Hoops, circus performer, shares his life story on the Santa Monica Pier to a group of high school students on April 13. Hoops stopped playing music for the crowd and emphasized the importance of finding yourself through adventure and opportunities outside of one's hometown. “When you graduate high school that is your only opportunity to see the world. You can always come back home, but you must get out,” Hoops said.

From growing up as a country boy in Savannah, GA, to performing at the Apollo Theatre in New York City and now living in Los Angeles, CA, Lenny Hoops performs on the Santa Monica boardwalk daily for the joy in entertaining and putting a smile on every face that walks by.

“Entertaining has been in my blood from the beginning,” Hoops said.

As a circus emcee and ring master when he is not in California, Hoops entertains locals through singing, playing music, putting on shows for kids and making balloons—all out of his appreciation for life itself and the people around him everyday.

“I paint, I record music, I make my own costumes and I have fun. Entertaining is my middle name,” Hoops said.

Pretty much just being alive, and just living is what I do. It’s all in the good family, and it’s the people that get me goin’ every day. It’s a good life, I think. I can’t help it. It’s the energy of the people. It doesn’t matter what age, gender, color, or any of that, we’re all just people”

Hoops’ career got its kickstart two years ago on the Saint Monica boardwalk while he was entertaining visitors and an incognito circus director was fascinated by his skills and ability to captivate an audience. After two hours, the director approached him and two days after the encounter, Hoops was flown to Texas.

“And there I was in front of thousands, and it felt so natural and it felt so good. Right after that show, he offered me the opportunity to emcee his circus,” Hoops said.

Hoops has been a part of the circus ever since, yet still comes back to Santa Monica where it all began. He strives to positively influence the lives of those who pass him by on the pier.

“Pretty much just being alive, and just living is what I do. It’s all in the good family, and it’s the people that get me goin’ every day. It’s a good life, I think. I can’t help it. It’s the energy of the people. It doesn’t matter what age, gender, color, or any of that, we’re all just people,” Hoops said.

After attending Morehouse College, followed by joining the navy for nine years as a submarine operator, Hoops said he found himself.

“I got a check every two weeks. I didn’t have to ask anybody for anything. I’ve had my military discipline: my pants right, hair cut, everything. Boom. There I was at 25; I didn’t have to look around,” Hoops said.

After students graduate from high school, Hoops emphasizes that this is their first and only opportunity to see the world while they are young.

“Get out, go to college, join the military, but do not stay in that town—go find yourself because there is a whole other world out there,” Hoops said. “You can always come back home, but you must go. This is your chance.”

The life of a social worker 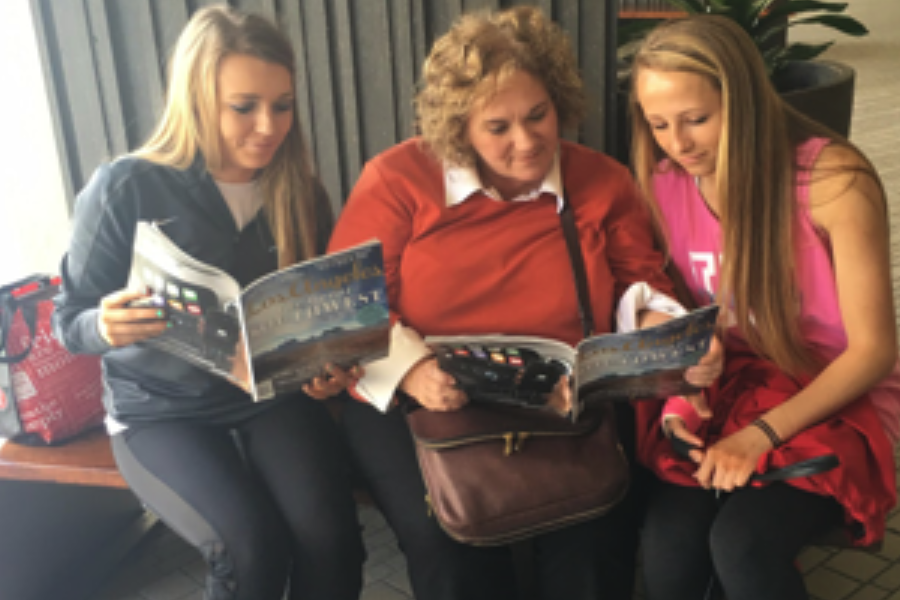 While reading the LA magazine, Jill Spector recommends good restaurants for juniors Natalie Rath and Ashley Avery. Spector has lived in LA all her life and cares for her 81-year-old dad and her children. “My parents have been there to help people and that is what I grew up seeing. They inspire me to help others and continue with my job as a social worker,” Spector said.

Since she was a toddler, geriatric social worker Jill Spector has always liked helping people.

“It has been in my blood my entire life, since I was a toddler. I’ve always loved taking care of people,” Spector said.

Spector knew she wanted her job to involve helping others, but was originally unsure of what path she would take.

“I wanted to be a teacher. I originally wanted to work with children in hospitals, but thought that would be too depressing and too confining. I went to UNC to get my masters in social work since being in social work means you can choose between many fields like business, the young or the old,” Spector said.

For the last 13 years, Spector has worked at Kaiser Permanente, a hospital organization that is dedicated to helping improve their well-being of their members.

“As a geriatric social worker I work with people recovering from illnesses, infections, injuries, wounds and mainly senior citizens. I also work primarily with patients who don’t have family or resources,” Spector said.

Some of the cases Spector deals with are families that have suffered from neglect.

“The hardest cases are the ones where people are addicts, alcoholics, old drug addicts and hoarders who are prisoners in their own home. In addition, there have been patients who are abused or financially abused, where their caregivers steal their money,” Spector said.

Spector keeps a positive attitude in light of the tragedy she witnesses.

My job is to help them get through their difficult time and have them come out stronger, or at least make the time they have left in their life as good as possible.”

“Sometimes my job is to just be there for them even though I can’t make it better. I can’t solve the problems, but I can acknowledge what they are going through. My job is to help them get through their difficult time and have them come out stronger, or at least make the time they have left in their life as good as possible,” Spector said.

Inspired by her parents, Spector continues to positively influence the lives of her patients.

“They have always put themselves out there to help any way they can. They have been there to help people and that is what I grew up seeing. They inspire me to help others and continue with my job,” Spector said. 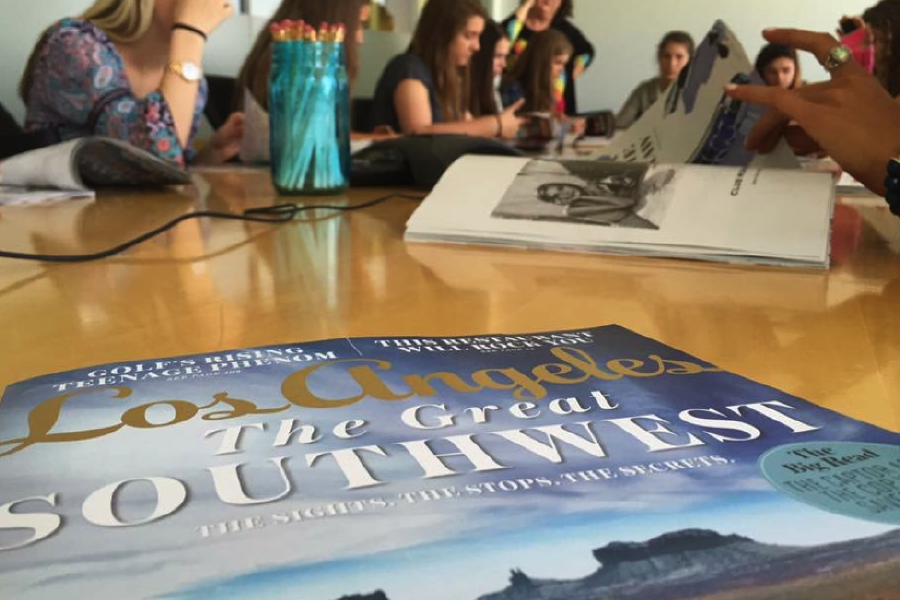 A group of 19 journalism students from Chicago, Tampa and St. Louis gather to master the techniques used at Los Angeles Magazine which is run by editor Mary Melton.

The Los Angeles Magazine has been running for 60 years, and with the help of Editor-in-Chief Mary Melton, is still going strong. The monthly magazine is printed and available online with content from food to pop culture in Los Angeles.

“My family is in the film business and I organize the year of magazine similar to how a film crew would,” Melton said.

Magazines are started four months in advance; however, investigative journalists can take months to write a feature story and start their stories earlier. Taking the time to make the story as good as possible is important to Melton, as well as taking time off to relax.

“I try to give my staff the weekend [off]. News never stops, but I want them to have friends and family and a life,” Melton said.

To those looking to go into the magazine industry, Melton advises to work up to the top.

“You can stand out by building your resume. Do internships and fellowships. Don’t think you have to jump right to the big leagues. It’s easier to stand out for good work at a local paper than at the New York Times,” Melton said.

Melton also believes in never turning down an opportunity, no matter how small.

“Never say no; no job is beneath you. And if you don’t know how to do something, say yes and figure it out,” Melton said. “Editors take notice in people who are willing to take opportunities and never asking when it’s due, just getting it done. I like when people are like that.”

Never say no; no job is beneath you. And if you don’t know how to do something, say yes and figure it out”

With a world surrounded by technology, print magazine readership has declined by one percent according to State of the Media. However, Melton does not worry about the end of print magazines.

“I don’t think magazine is dying,” Melton said. “People still enjoy the experience of reading and holding it in their hand. Magazine is an experience.”

Drawing a caricature of a customer, artist Walt Davis questions a young girl about how he should portray her in the drawing.

Singing, dancing and artistry attract tourists along the Santa Monica Pier in Los Angeles, CA. There are no shortage of vendors trying to capitalize on the tourists. Canadian born Walt Davis sets up his workplace whenever he needs cash.

“I’ll come out here if I need the extra bit of cash to help pay the bills,” Davis said. “About 20 years ago I was suing somebody, and I needed the extra money to help pay for the lawyer; this is when I started coming out to draw people.”

When Davis is not on the pier, he creates layouts, logos, special effects, cosplay and costume designs.

“When people do not pay me on time, that is when I go to the boardwalk and set up a stand to start drawing families,” Davis said.

Being a freelance artist, Davis designs costumes and props for his clients as well.

“One of the craziest costumes I have ever designed for someone, was a large bear costume for a commercial,” Davis said.

Davis originally went into the art field, because of his love for Art History.

“The Renaissance stands out as a big inspiration for going into the art industry,” Davis said. “Michelangelo and Leonardo Da Vinci have always been my biggest inspirations because of the art they produced during the Renaissance.”

Davis moved from Canada to America over 40 years ago. Here he began to make a name for himself in the art world.

“I have been to almost every state in the U.S. for the conventions and other art related matters,” Davis said.

At the end of the day, it doesn’t matter how much money you make, what matters most is the smile you put on the face of your customer.