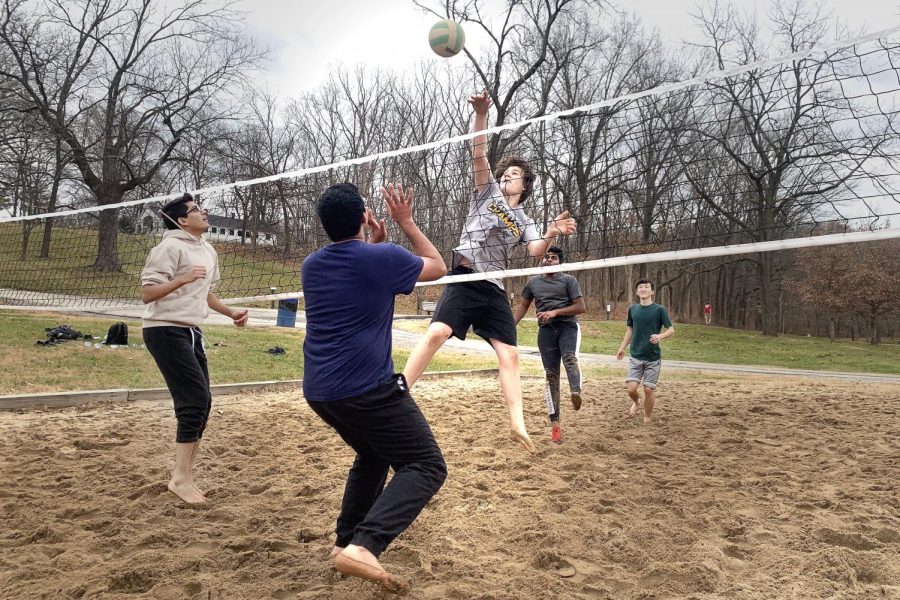 Digging their sandy toes into the ground, seniors Areeb Hasan and Uzair Mohsin prepare to block senior Nathan Meek’s spike, set up by seniors Manoah Inje and Gordon Yu. The boys took time to hype each other up after plays. “There's a lot of boosting each other up. As you play, you have like five people telling you how great you are and that feels great. When we get off [the pit], people always comment like 'Oh, so-and-so has gotten so good at this.’ I love that we’re learning and having a good time,” Meek said.

In an age where students have become increasingly focused on grades, extracurriculars and college applications, a group of boys have taken to playing amateur sand volleyball at Edgar M. Queeny County Park with the goal of just having fun.

The informal group, spearheaded by seniors Nathan Meek and Dylan Ryan, began their tradition late this fall, braving the freezing clumps of sand and the very real possibility of frostbitten toes. Ryan began the activity when he brought a volleyball to the park one day.

“The first time we went it was only 50 or 60 degrees [Fahrenheit] so it wasn’t that cold, but the sand was freezing so all of our feet were numb by 30 to 45 minutes in. I was worried, thinking ‘Oh no, they’re not going to want to do this again,’” Ryan said. “I was pretty nervous because I was going to try and suggest the idea again, and I was worried that they wouldn’t like it. But someone else asked [when we would play again] in our chat before I [could suggest it], and I knew they wanted to as well. It was pretty nice to know they liked it as much as I did.”

Having played volleyball in gym classes and with friends when he was younger, Meek provides guidance to some of the boys on ways to improve their technique if they’re interested.

“Since I have a little more experience, sometimes I show somebody how to do something and then on the next play, when they do it, that’s a really good feeling,” Meek said. “Now I get to just feel that out and play with my closest friends. What’s better than that, you know? We’re not crazy about winning, but at the same time, everyone’s playing to the best of their abilities. It’s a lot of fun, the camaraderie before and after [we play], and even during the game, just feels really nice.”

The first time the group met, they only had about six people participate. Since then, the group has increased by 40% in size and continues to visit the park a few times each week.

“Everyone enjoys playing, so they want to come back and play it again. More people are getting their own balls, and we’ve been getting surprisingly good. When we started, we could hardly keep the ball up, but now, we’re getting rallies back and forth a few times,” Meek said. “Now we’re starting to get a solid 10 [people] out each time, which is great because having more people is more fun.”

The boys, though they admit to getting competitive, believe their fun stems from not taking themselves too seriously.

“Gordon once infamously slid to the ball and kicked himself in the face, flattening himself on the ground. He’s really uncoordinated so it’s fun to watch that. As a whole, only Nathan and I are actually good at it—  most of us aren’t that coordinated— so it’s pretty entertaining,” Ryan said. “We’re not very good, but that’s what makes it fun.”

The group initially gamed together and hung out in their Discord server throughout the pandemic, and sees their time on the courts as a valuable addition.

“We’re super busy as most seniors are, and getting time where you don’t have to think about any of the busy stuff is pretty nice,” Ryan said. “When we’re outside being physically active and around people, I don’t really have time to think about the stuff that’s worrying me. It’s really nice in my head to just not have to worry about things for once.”

Ryan believes that between all the time spent on the online servers and serving in the volleyball pit, the group has gotten much closer.

“I’m pretty introverted and so I don’t really do stuff outside of school with people. This is one of the few things where I’ll actually go be around people outside of school. I’ve gotten a lot closer with this group as a whole because I didn’t do too much with them before [the pandemic], and it has been pretty nice,” Ryan said. “A lot of us are staying nearby for college, which is [also] nice because we’ll still be able to be around each other. It’s really great to make some memories and have a group of people to do stuff with before we’re [at college].”