The Madi and Addie winter chronicles: The Lion, the Witch and the beginning of winter 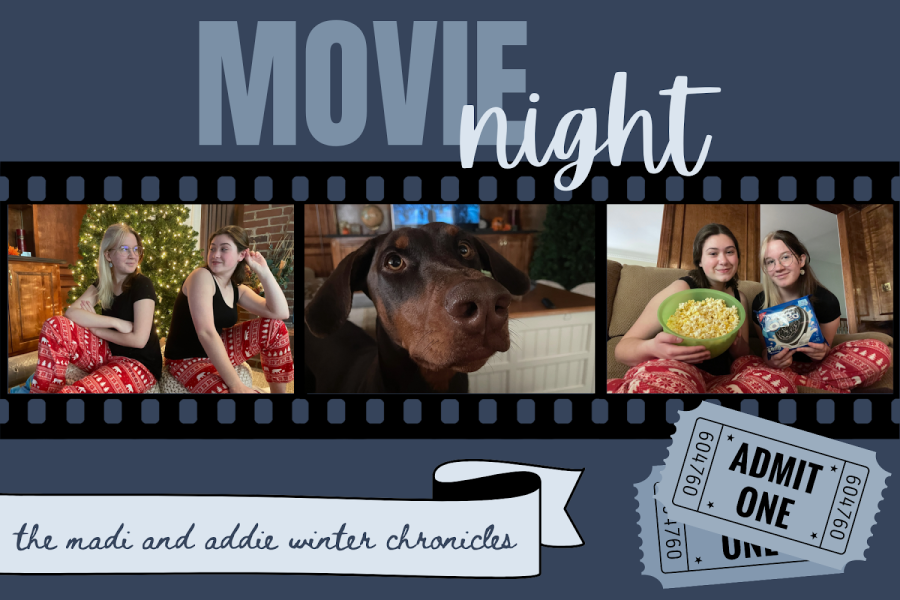 Madi and Addie prepare for the winter season with matching pajamas and a movie night.

Colorful leaves fall from trees with branches left bare, stores are filled with red and white decorations and radio stations are starting to play holiday music. To celebrate the changing seasons and prepare for the upcoming holidays, Addie and I have decided to create a column exploring winter activities and destinations around St. Louis.

We started our journey with a staple in anyone’s cozy winter celebrations: a movie night. After an epic trip to a Target in Boone’s Crossing, we were armed with matching pajama pants, buttery popcorn and a full (although soon to be emptied) package of Oreos. Once we were completely prepared, it was time to choose a movie.

Addie had never seen “The Chronicles of Narnia: The Lion, the Witch, and the Wardrobe.” So, I thought it was the perfect place to start.

Quick spoiler alert, so if you haven’t seen this childhood classic go watch it. Now that those who haven’t seen the movie have left, we can begin the review with a quick synopsis. The movie follows the Pensive siblings’ journey into the fantastical land of Narnia filled with talking animals and magic. Peter, Susan, Edmund and Lucy escape their life in WWII-era England through a magical wardrobe and fight their own battle against Jadis the White Witch who subjects the land of Narnia to an eternal winter. They partner with magical beasts including a lion named Aslan — the true ruler of Narnia — and eventually beat the Witch after a great battle between good and evil. After the battle, the four siblings are crowned as the kings and queens of Narnia.

Wrapping up the summary of the movie, let’s get started with the actual review. We will be looking at characters, the plot and the overall amount of winter-ness.

Narnia is filled with a multitude of interesting characters from the Pensive siblings themselves to the White Witch to the talking animals. Of the many characters you meet throughout the movie, at least one is sure to stand out as a favorite.

This is not my first experience with the world of Narnia, in fact, you could say I grew up on it. In my many times reading the books and watching the movies, there is one character I have always had a soft spot for. The giant, golden lion Aslan still continues to be my favorite even after years of not interacting with the franchise. The lion, characterized by his wisdom and kindness, stands as the true ruler of Narnia and is the representation of good, all traits which resonated with my younger self and continue to now.

Addie, however, found a different character to gravitate towards. A Faun by the name of Mr. Tumnus. Viewers first see Mr. Tumnus when he informs Lucy of the state of Narnia and welcomes her into his home. Although originally unsure of his intentions, in the end, Addie decided Mr. Tumnus demonstrated the type of kindness that Narnia was lacking. Whereas Aslan stood as a divine, untouchable figure, Mr. Tumnus radiated a comforting aura of home and family.

Personally, I found the plot to be extremely engaging. We see a typical fight between good and evil, however, the boundary is constantly being crossed, posing questions like: is a person that commits an evil act evil? Should one sacrifice themselves for the good of another? When is it appropriate to forgive a person’s past actions? Many of these questions stem from the actions of Edmund and the White Witch.

Near the beginning of the movie, the White Witch plays on Edmund’s anger towards Peter by telling him that he will be king of Narnia if he helps her. So misled by Jadis’ promises, Edmund helps her to meet his siblings. Afterward, his siblings — especially Peter — struggle to trust him, constantly referring to the fact that he played into the witch’s scheme.

Aslan tries to prevent this judgment stating, “what’s done is done, there is no need to speak to Edmund about what has passed.” Protecting Edmund again, Aslan also gives his life to the White Witch in Edmund’s place, although he had done no wrong. The morally gray actions of Edmund stand as a focal point in the lessons of responsibility taught to viewers throughout the movie.

Overall, the movie had an interesting and enjoyable plot ending in an epic battle between those trying to bring summer back to Narnia, and those wanting to preserve the great winter.

Now for the numerical part. The title of a movie or book tells you a lot about what you are in for. In our case “The Lion, The Witch and the Wardrobe” is pretty straight forward. Because of this, we will be rating each by how much they show up in the movies.

Let’s start with the first thing mentioned in the title: the lion. Aslan’s dignity and pride were symbolized in his portrayal as a lion and also stand as a key point in the story. Although Aslan is mentioned throughout the movie, it isn’t revealed that he is a lion until the Pensives arrive at camp. This is the main reason we have decided to rate the amount of lion in the movie at 33.3%.

When it comes to the wardrobe, it was briefly mentioned. While Narnia is located within it, the wardrobe has only earned a 25.9% due to its limited screen time.

An extra category we will be ranking is the amount of winter in each activity. We decided to rate “The Lion, the Witch and the Wardrobe” a four out of five snowflakes. Most of the movie covers the White Witch’s creation of the 100-year winter in Narnia. In the movie the snow, White Witch and a 100-year winter combined led us to rate this movie night a four out of five.