When bright kids burn out

The reality of stress in gifted students. To protect the identity of students, fake names have been used 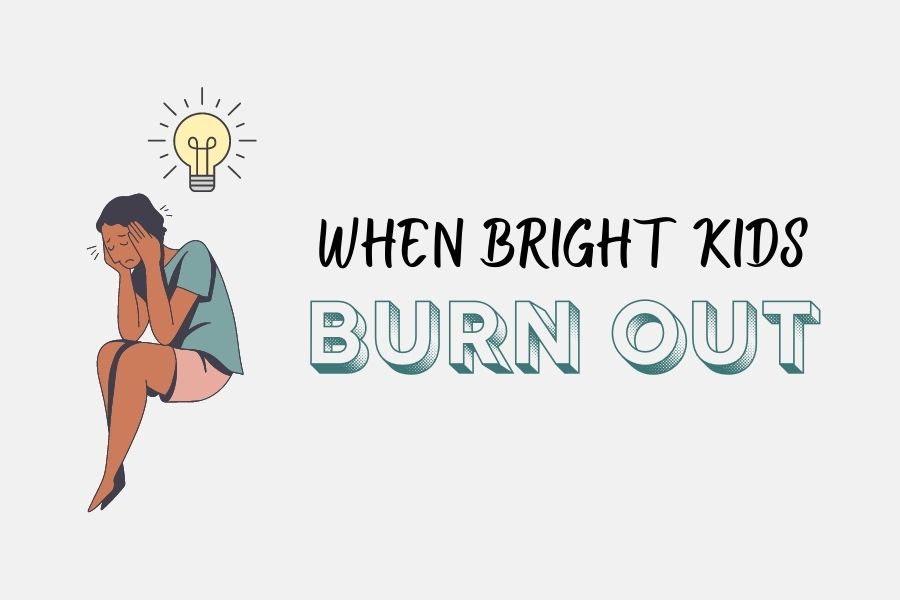 Students involved in the MOSAICS program have been facing burnout resulting from holding themselves to high standards.

Of the estimated 50.6 million students enrolled in K-12 public schools, about 3.2 million stand out from the pack. These kids are given a special name simply for scoring high on intelligence tests — “gifted”. To accommodate local students’ needs, the Parkway School District has fostered its own gifted program called MOSAICS.

The MOSAICS program was created to accelerate and enrich the educational environment of gifted students. After completing a test with a gifted specialist and being referred to the program by a school counselor, students enroll in the program. One of these students is junior Ronan Hatchell.

“[MOSAICS] was almost like an escape for me. I wasn’t too familiar with most of the kids in our elementary school, but I was able to be with people who were like me. Who I could get along with better. Who I could understand better,” Hatchell said.

In middle school, students enrolled in MOSAICS would alternate days attending the gifted program and Physical Education class. However, after hitting high school, students would no longer be enrolled in a separate class exclusively for gifted children. Instead, accelerated learning in AP and Honors classes could take the place of MOSAICS.

“[It] was certainly a weird experience. By which I mean, seeing all these people I didn’t know in the accelerated classes. [It was] cool, you know, new people, but it was weird to see that everyone else is also really smart. I wouldn’t say it knocked me down a peg—It’s kind of cool to see — but it also makes you wonder, then what am I? Why am I different in one way, but not the other?” Hatchell said.

After this transition from middle to high school, former members of the gifted program reported having less motivation to get assignments done. These signs point to the experience of burnout in students— the absence of motivation caused by improperly managed stress. Junior Riley Thering, also a former member of the gifted program, feels that this description closely describes the struggles she has faced after entering high school.

“I’ve just had no motivation to do schoolwork whatsoever. I get home, exhausted, lay in bed and yell at myself the entire time knowing I have to finish everything, even though I don’t have the motivation to do it. It slowly gets more overwhelming because there’s more and more schoolwork and more topics that I don’t understand. And it’s exhausting. I get less sleep because of it, it’s just a destructive cycle,” Thering said.

According to the Davidson Institute for Talent Support, a non-profit which works to open opportunities for gifted children, burnout can be seen in disengagement from interests, feelings of dread when relating to school, feeling overwhelmed at small tasks, general unmotivation, and more frequent anxiety.

“When I’m doing work, it’s not only a question of whether or not I am doing enough but also is it gonna be worth it? Like even when I put my mind to it, it doesn’t feel right sometimes,” Hatchell said.

While some believe that the gifted program is not tied to feelings of burnout in students, Thering feels that the pressure placed on herself and others from being in the program has a hand in worsening it.

“The pressure I put on myself because of the way I had been raised in the gifted program made the burnout stronger. I overwhelmed myself with having to get perfect grades,” Thering said. “And that’s not necessarily my parent’s fault or anything, but I was raised my whole life in MOSAICS getting praised for grades. Therefore, that became very important to me, or at least an area where I put a lot of pressure on myself.”

Amanda Megl, the gifted liaison for the Parkway High Schools and West Middle MOSAICS teacher, works to help lessen struggles like burnout in gifted students. However, Megl has still seen this phenomenon in a number of her own students.

“I think [burnout] is a kid by kid basis, so a lot of factors go into play. How strict are their parents? How high did their parents want them to achieve? What are the kids’ individual expectations for themselves? What kind of expectations do they have for the future? So I think, sometimes, kiddos can put a lot of stress on themselves because they want to please everyone and do really well,” Megl said. “They have these goals for their future and what they want to be, but sometimes they end up burning out because they don’t realize it’s okay to fail a little bit here and there. I currently have sixth graders who talk about ‘oh my gosh, I have a B’ like that’s a terrible thing. You have to be resilient because your whole life is not going to be perfect. You’re not going to make perfect grades, and you’re not going to be perfect at your job when you grow up.”

While Megl has implemented programs into the MOSAICS program to reduce student burnout, she still feels that gifted students suffer from it—especially members of the MOSAICS Academy Explorer Program. The Explorer Program allows eighth-grade students to attend certain high school classes and return to West Middle before the end of the school day.

“Some kids will start to feel burnt out…especially if they’re in the Academy Explorer Program. That can sometimes cause kids to have some burnout because they start going to high school when they’re in eighth grade, and taking high school level courses,” Megl said. “They’re accelerated one year above all their peers, so once they get to ninth grade, they’re doing 10th-grade work and so on, so forth. So I think that sometimes they can have some burnout with it. But that’s why I’m put in my position to help them out and give them some guidance if they need it.”

Although burnout has been attributed to enrollment in the gifted programs, the National Association for Gifted Children feels the programs still provide talented students outlets to challenge their thinking that is not provided in a typical classroom setting. Similarly, Parkway’s MOSAICS program was put into place to teach students research and technology skills and to think outside the box.

“It’s a program where they [students] get to relax. They get to do all of the things that cater to their strengths. So they get to be creative, [and] they get to problem solve. They get to think about things in different ways,” Megl said. “Sometimes in regular classes, they’re put in groups and do kind of what we would call like a cookie cutter activity. [A cookie cutter activity] was designed to be done exactly this way. Follow the steps and in the end, everybody’s stuff looks very similar, if not the same. In the gifted program, they have a little more leeway. They get a general idea of what they’re going to do, but everybody will make whatever they decide to.”

Former students may argue the complex issue of the effects of the gifted program, however, they still agree that overall MOSAICS is a positive program.

“I’d say there are certainly some negative aspects [to being in the gifted program], like the burnout I’ve clearly seen in myself and other people, but at the end of the day, I don’t know where I would be without it,” Hatchell said. “I’ve met so many great people, and done so many different things. If I had the choice to put myself in [the program], I would do it again. Sure burnout is never fun, but I think [the program] helps students like me.”