We’re feeling “All Too Well” after Red’s re-release 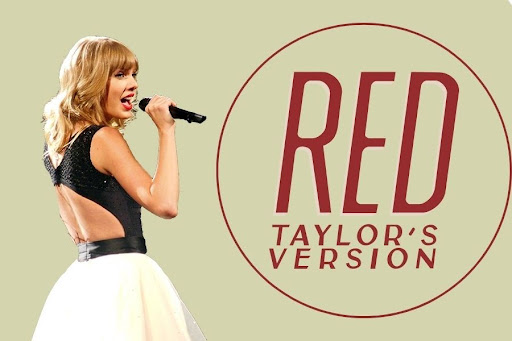 If you’re like us, you have been blasting Red (Taylor’s Version) since it was released. Before you say it, we know this album was already released in 2012. But if you’re a true Swiftie, you know just how significant these re-recordings are. If you’re unfamiliar with the situation, let’s catch you up.

Basically, when Swift originally recorded her first six albums, her contract said that she couldn’t own any of her music. Swift made a change in 2019 when she released Lover, the first album she owns. Every album since then is owned by Swift. She has been working her way through re-recording her first albums to ensure that she has ownership over her music.

Another unique aspect of these albums is the “Vault”. If a song is from the “Vault,” essentially it just means that it’s an old song that hasn’t been released yet. Usually, these songs end up being among our favorites. Swift has said that she wrote about 30-40 songs in her original draft of Red, but had to cut most for practical reasons. Among these cuts were the nine “Vault” songs we see on the new album.

Now that we’re all caught up, let’s jump right in. Here are our top five favorite songs from the “Vault.”

We obviously love the five-minute version, both the original and the re-recorded (although we’ll only be listening to the re-recorded version from now on), but they both pale in comparison to the ten-minute version. While Swift is able to deliver plenty of emotion in each rendition, the 10-minute takes the cake.

When we first listened to it, we barely recognized it. It sounded more stripped-down, more like an acoustic performance rather than all of the additions on the shortened version, allowing Swift’s voice to shine through.

Lyrically, the 10-minute version cuts deeper than ever before, listing grievances, manipulation and emotional fallout that transcended some of the more light-hearted songs on the album. We won’t name names, but Swift’s message about her past relationship is clear. She meticulously analyzes each heart-breaking instance, providing us with several anecdotes that work to establish her crystal clear emotions about her ex.

Swift didn’t stop there though, however. Making her directorial debut, she wrote and released a short film accompanying the song. The film stars Sadie Sink and Dylan O’Brien as the couple, and gives us more insight than ever before into the true implications of the lyrics. Seeing “the scarf” make its way into a film like this was a dream come true for Swift’s fans.

Many critics have deemed this song repetitive, but the story-like feel of the song keeps us eagerly listening the whole way through. From beat changes to unique lyrics to heart-wrenching delivery, Swift really outdid herself with this song. The fact that the song is ten minutes long is just the cherry on top. “All Too Well” is, without hesitation, our favorite song off this album.

“Message in a Bottle”
“Message in a Bottle” is a poppy ballad that feels very different from the other songs in this album. The upbeat background music and simple melody culminate in a classic feel-good song. Many have said that this song serves as the bridge between Red and 1989, and we couldn’t agree more. “Message in a Bottle” maintains the emotional message of Red, but in this song, we start to see the poppy tone that dominates 1989.

Swift stated in 2012 that she views songs as messages in a bottle, saying “you send [songs] out to the world and maybe the person who you feel that way about will hear about it someday”. Though Swift never makes it clear who this song is specifically about, certain clues sprinkled throughout hint at a few suspects (Cough, cough, “How is it in London”).

This song has a lighter tone that really sets it apart from other Red songs, which deal more with heartbreak and revenge. Though some may argue that Swift’s message is slightly broken-hearted as she repeats that a message in a bottle “is all she can do”, we would argue the opposite. Swift maintains a hopeful tone as she dreams of the future with her mystery man.

“Message in a Bottle” is arguably more simple than the other tracks on the album, but the powerful chorus, ingenious lyrics, and minimalistic background music all serve as their own layers which combine to form a great song.

A bright pop ballad, “Message in a Bottle” won’t get old even if you replay it over and over (We won’t judge). While the song is a transition in essence, it is powerful enough to stand alone. The upbeat, happy feel of the song sets it apart from many of the other songs in this album and makes us love it all the more.

At its core, Run is a sweet ballad of two lovers imagining what it would be like to run away together. They write notes to each other, keep lockets, and ask their partner to run, like they’d “run from the law.” It could be a hint to Swift’s constant battle with the media and its invasions into her personal life, as in many songs like “I Know Places,” or “the lakes,” she often sings to a partner she wishes to hide from prying eyes.

From different artists, a song like this could easily turn into a sickening song about a schoolyard crush. However, Swift isn’t one for cringe: her and Sheeran’s delivery turns what could have been a little jingle into a deeper, sweetly imploring song, with lyrics that go past the surface.

If you’ve listened to “Everything Has Changed,” or even “End Game,” you know Swift and Sheeran have major musical chemistry. Every time they harmonize, you can probably see a little glimpse of heaven. They weave in and out of each other’s verses, coming together in the chorus to softly sing the melodies.

Similarly to “Everything Has Changed,” the song is a relaxing and gentle tune rather than one of Swift’s uplifting fast-beat numbers or her notorious heartbreaking tracks. Overall, “Run” was a breath of fresh air and a testament to both Sheeran and Swift’s impeccable talent for a duet.

“Babe”
Yes, “Babe” is about a cheating boyfriend. Yes, that topic is way overdone. However, “Babe” is in its own category in the extensive list of cheating songs. “Babe” isn’t a rage-filled revenge song, nor is it a winding slow song that you can’t wait to end. You could even say that “Babe” is a break-up song disguised as a cheerful melody.

Swift released the track with the band Sugarland, and co-wrote the song with Train singer Patrick Monahan, so many bright musicians collaborated to produce this fantastic song. The song was of course originally written in 2012 for the original debut of Red, but didn’t make the cut, so we had to, unfortunately, wait nine more years before hearing this catchy melody.

This song is different from Swift’s typical style in that the lyrics are more vague, and could really apply to almost any break-up scenario. Usually, specific memories are littered throughout Swift’s songs, so they feel anything but general. We’re partial to Swift’s normal lyricism, but we still love “Babe” just because it is so different from the usual when it comes to break-up songs.

Personally, we hate the dragging, emotional break-up ballads, so “Babe” was a breath of fresh air. Swift’s emotion shines through throughout the entire song, but the only place where there is an air of sadness is in the bridge, and even this is short-lived.

“Babe” was another poppy, more up-beat song, and we love it for that. Swift blazed another unique trail with this song, which differed from almost any other song about cheating. “Babe” reflects Swift’s creative style, and for this reason, was among our top five.

“Nothing New”
Listen, if you’re an indie fan, you probably had a heart attack when Swift released sister albums “folklore” and “evermore.” She brought in talented, veteran indie artists like The National, HAIM and Bon Iver to back her up too, demonstrating her ability to transcend genres.

With the rerelease of Red (Taylor’s Version), many expected a simple return to Swift’s past, but she showed that she could update songs to her newfound genres with the popular indie artist Phoebe Bridgers on “Nothing New.”

A beautiful, yet depressing, song, “Nothing New” criticizes the media’s view of women in the spotlight. Swift and Bridgers lean into the uncertainty they faced in the early 20s as they began to shed the image of innocence and youth present in the earlier stages of their careers. Swift especially has constantly been painted as a ‘Miss Americana’ type figure, facing criticism for drinking, which she and Bridgers break down in the song.

Swift has achieved success through her ability to relate to the struggles we all face, and “Nothing New” is a prime example. Feeling lost, feeling judged, feeling like we can’t do anything right, Swift shows us we’re not alone. She also doesn’t miss another opportunity to rake the media over the coals, speaking of how they drive her out, how they won’t want her when she’s “nothing new.”

In the past, Swift has usually reserved duets for men that she sings about a relationship with. But on “Nothing New,” Bridgers becomes the first female artist to have independent lines on the song, expressing solidarity with Swift’s feeling of helplessness as a woman in the music industry trying to constantly reinvent herself.

Sound-wise, Bridger’s and Swift’s voices sound tired, almost weak, playing into the whole idea of their exhaustion with the pressures of their artistry. Yet, they never fail to hit a note or to harmonize with each other. The song is slow, soft and, let’s face it, depressing. The guitar strums plaintively, and the soft violin and piano in the background add a haunting beauty. If you’re feeling lost, this acoustic track will let you know that you’re never alone.

Honorable Mention: “I Bet You Think About Me”
We’d be remiss not to mention this one. With a strong return to country roots, Swift leans into a swinging, twangy, upbeat melody that makes you want to dance. And don’t count out her ability to sass because we bet whoever this song is about (gosh, we wonder who…) is really regretting letting her go right about now.

But, the most exciting part about this song has to be its six-minute-long music video, directed by none other than Swift’s long-time friend Blake Lively. It’s a must-see return to videos, which we haven’t seen since evermore’s “willow” got one close to its release in December. In the “I Bet You Think About Me” video, Swift prances around her ex-lover’s wedding in various red outfits, teasing and mocking him, singing about how he probably wishes he was still with her, and if we were him, we’d be wishing the exact same thing.