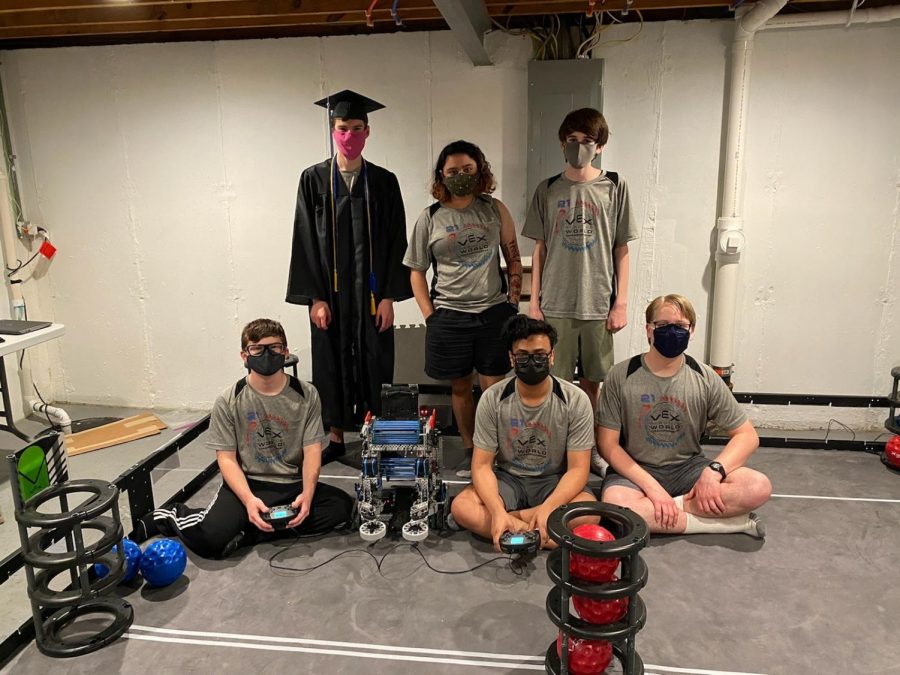 Robotics Teams Blue Brains and Memory Leak advanced to the 2021 VEX Robotics Competition at the end of this May.

In a successful four days team Blue Brains, led by senior Levi Ladd, reached the World Semi-Finals, placing them in the top eight globally and top seven in the U.S. Team Memory Leak led by sophomore Ethan DeLuca, were Division Finalist, placing in the top 48 globally and top 37 in the U.S. Teams across the world were competing head-to-head, live and in real-time remotely using new VEX Live Remote Tournament technology.

“Our teams competed from the basements of their homes using top-notch equipment and a full competition arena setup,” Robotics coach Chris Donaldson said. “Teams designed, built and coded their robots to perform tasks autonomously and via driver control while competing in this year’s Change Up game.”

With the fall of the 2020 VEX Robotics Competition, the teams believe they were well prepared to bring their A-game in this year’s 2v2 style competition. As the year progressed the team passed through mechanical modifications, code based changes, an abundance of driving practice

“We resumed practices in August of this year via discord and Zoom calls,” Blue Brains Senior captain and four year robotics team member, Levi Ladd said. “My team kept the same exact team as last year. Since we worked so well together, we wanted to do it all again.”

With the World Competition approaching, the teams performed extra exercises in preparation.

“With Worlds getting closer, we did a lot of scouting,” Ladd said. “We’d watch previous matches from our competitors that had been recorded and uploaded. That way we got an idea of how strong certain teams were and how big of a threat they were to our success. At the same time, we were able to figure out their strategies so we could create counter strategies.”

“It’s not simply the best bot that wins, it has a lot more to do with strategy. Leading up to Worlds we focused very heavily on strategy. A good bot is created when it can complete the given tasks efficiently and quickly,” Ladd said.

Sophomore Blue Brains team member, Anushka Dharmasanam, believes her team’s success can be credited to the variety of skill and areas of intelligence among the members.

“I feel like in any good robotics team, there’s always people who specialize in an area but they also have to understand the gist of all the other aspects so we can work better as a team. [sophomore Isaac Porter] specialized in code, Levi would help with code when Isaac wasn’t there, I specialized in notebook and helped with mechanical work, [senior Jack Wild] would help with mechanical work and scouting, [junior Rick Biswas] and [sophomore Joseph Britt] were both drivers and mechanics. It was very well balanced,” Dharmasanam said.

The team members have not only created victorious robots, but strong bonds between one and other.

“When I started on this team, I only knew two other members. Now I’d say my team is probably my closest friends here,” Dharmasanam said. “Outside of the 22 hours a week we meet for robotics, we like to play games together online and sometimes we meet up for a member’s birthday or just to go grab some ice cream and I feel like since we spend so much time together, we have also grown closer. Robotics was what united us but we have so much more in common.”

Ladd believes these connections contributed greatly to their performance throughout the season. Prior to the World Championship, the team competed in numerous local competitions, followed by the State Championship and two online tournaments.

“In a competition, which is a very stressful environment, it comes in handy that we’re all very close. We all know when help is needed and how to battle the problem as a whole. We’d make jokes to lighten the mood if anyone ever got overwhelmed. With all the friends this team has given me, it’s been a really amazing experience, especially as a Senior, having been able to watch the younger members grow and develop skills over the years,” Ladd said.

Sharing a passion for analytics and building, the teams look forward to future competitions.

“Every year we get a new game challenge for which we have to build a bot that can score the most points possible. It’s so fun to brainstorm solutions and prototype/test it and watch the robot come together in the end,” Dharmasanam said. “It’s always a slow and sometimes tedious process to fine tune the mechanisms, especially near the end, but it’s all worth it when the robot is done and we can step back and say wow! We actually built this!”

As he pursues a potential career in software designing or computer programming, Ladd hopes his words of wisdom stick with the team.

“Do what you think you can, take another step and persist through the hard times. Every problem can be solved,” Ladd said.