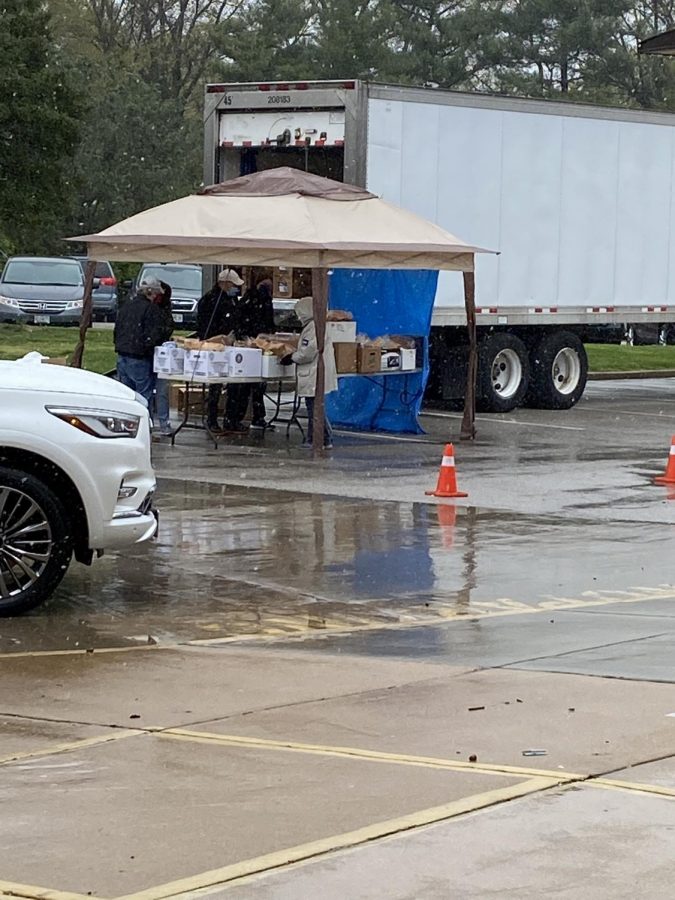 At the monthly food distribution in April, food pantry volunteers pass out dates and halal chicken to Muslim families. The pantry altered its previously biased practices to better serve all who receive pantry services. “The observance of Ramadan prompted my thought process and helped the light bulb to go off in my head,” Food Pantry Director Diance Peterson said. “I'm hoping we can continue to offer halal meat at every distribution.

The food pantry recently had a reckoning with its practices and services. In April, for the first time, there was zabiha-halal meat and dates distributed to Muslim families observing Ramadan. Diane Peterson, director of the pantry, said there was a deep personal and professional process that caused this transformation.

“The most subtle expression of white supremacy is the way that cultural and religious practices that pertain to white, Christian customs have been embedded in the culture in the U.S.,” Peterson said. “As I was hearing families asking for halal meat, I started to ask myself ‘what are some ways that we may be inequitable in the way that we serve certain people through the pantry and don’t serve others?’”

The pantry provides for approximately 400 families in the district, many of them coming from various backgrounds and cultures. As Peterson thought more about the pantry’s practices, she discerned contradictions in how it only catered to families celebrating mainstream holidays, like Thanksgiving or Christmas.

“I started to think about Thanksgiving, a holiday that has very painful origins for parts of our population, yet in the pantry, we often try to get turkey for Thanksgiving,” Peterson said. “We were tailoring some of our pantry practices according to white supremacy ideals.”

Many in the district have been working to recognize inequities that are embedded in some policies and procedures. After Peterson began recognizing the shortcomings in her field of work, she talked to district parent Marah Zabibi to get guidance on how to better support Muslim families who receive pantry services.

“I was very happy to help her because the initiative was beautiful. We had a short conversation where she asked questions about how families celebrate Ramadan and what they might need from the pantry. She was very considerate and generous, and it was a good opportunity to build bridges and more understanding,” Zabibi said.

After the conversation, the pantry turned to Salaam Market, a local Muslim grocery store, to purchase the food for the distribution. They bought around 35 chickens and three big boxes of dates for a discounted price, courtesy of the store’s manager Hasan Sleem.

“When [Peterson] said [she wanted] halal meat and dates, she knew what Muslims needed during the month of Ramadan and that made me happy,” Sleem said. “I respected the idea because by [the pantry] doing that, it gave me hope for the future that we don’t have to be afraid of nobody and we could be ourselves.”

When the food was distributed April 20 through 21, a Muslim parent and food service worker at West High who prefers to go by M.M., was pleasantly surprised to hear of the change. She has been receiving pantry support since the start of the pandemic.

“Halal means different things to me and to other people. It did not make too much of a big difference to me that this meat was offered, but the food pantry did a good job because they respected the Muslim people who follow halal,” M.M. said.

As a white staff member serving diverse people in the pantry, Peterson feels humbled by the grace and patience that many other families gave her, when she said they should not have had to.

“It’s one thing to feel supported by the food pantry because you’re receiving things that your family can eat. It’s another thing to feel seen by the pantry and served equally. It made me think ‘what took [us] so long?’” Peterson said.

Looking ahead, the pantry hopes to make the partnership with Salaam Market permanent in order to offer Muslim families support on a regular basis. As Peterson reflects on the process of making this shift, she is reminded that inequities are embedded in many different spaces. It takes all individuals and organizations, she says, to root them out and replace them with just actions.

“I was behaving inequitably [with] some of my choices, and I’m responsible to change that. That’s a part of making our Parkway community equitable in all the ways that we work and interact with each other,” Peterson said. “It’s a blessing when we have an opportunity to learn and then to apply it and do better. That’s how healing happens surrounding inequity and surrounding white supremacy.”