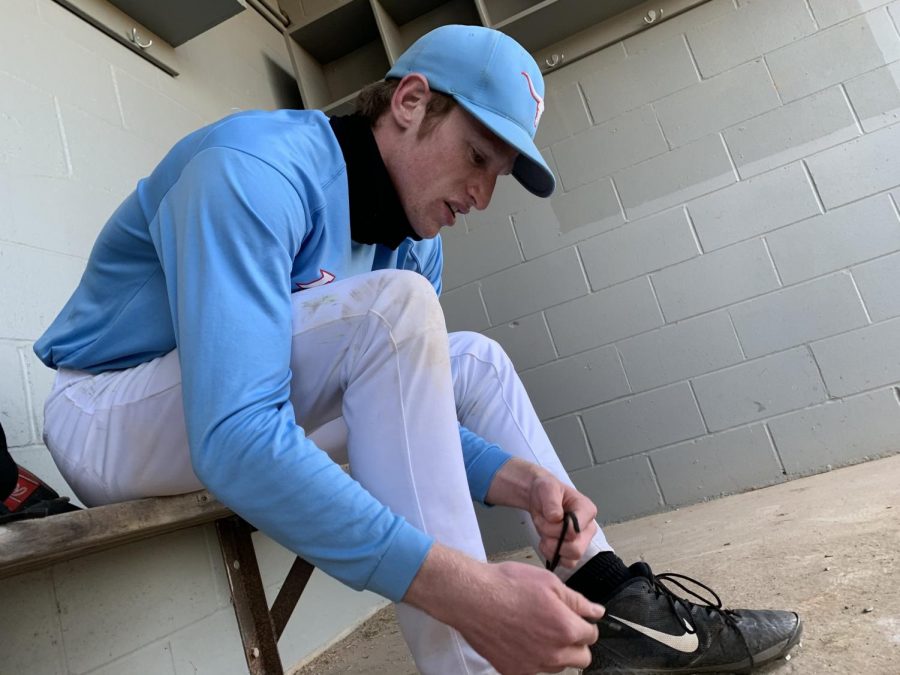 Preparing for baseball tryouts, senior Jack Meert ties the laces of his cleats. Meert is back after being cut a year ago. "I'm excited for my senior season," Meert said.

After being cut from the baseball team, senior Jack Meert found a new diamond to play on for the Fontbonne University Griffins. Meert used the obstacle to earn an opportunity that only 7.3% of high school players get: playing NCAA baseball.

Twelve months ago, Meert was on the outside looking in at the 2020 team, where a large senior class took many of the roster spots. The season was eventually cancelled and never came to fruition, but Meert still gained the motivation to work toward his goals.

“At the time, I was super disappointed and shocked. It just reminds me that I need to continue to work,” Meert said.

He then played club baseball for the Adidas Athletics all summer, weight trained and worked to perfect his craft to earn an opportunity at the next level. Playing for the Athletics was a way for Meert to gain attention from colleges.

“I worked out a lot more and really tried to focus on things that I needed to improve like fielding and throwing but also just trying to get better at the game of baseball overall, just working on the mental part of the game,” Meert said.

Meert then began to think about his chances of playing in college. COVID-19 made it more challenging for athletes to be recruited. The NCAA has been in a dead period dating back to March 2020, and coaches are still not allowed to meet with high school athletes until at least May 2021. Meert did not let this stop him as he continued his search.

“When I first started [college searching], I was looking for a smaller school close to home. [Fontbonne] has a dual degree with Washington University in St. Louis engineering, so it was good,” Meert said.

After multiple instances of talking with the Fontbonne coach Ryan Good, Meert finally decided to call and tell him he was committing.

“I felt a sense of relief and like a weight was off me not having to think about it all the time,” Meert said.

Now that Meert has his plans for after high school, he can look forward to the upcoming season. This spring brings Meert another chance at the Longhorns’ roster, and he hopes to have an impact as well.

“I’m excited for the success that we are going to have as a team and being able to play a game I love,” Meert said.

He also believes he learned about himself as a person when it comes to persevering through adversity.

“I couldn’t let getting cut ruin a game that I enjoy. There is always a place for you if you want to keep playing,” Meert said.