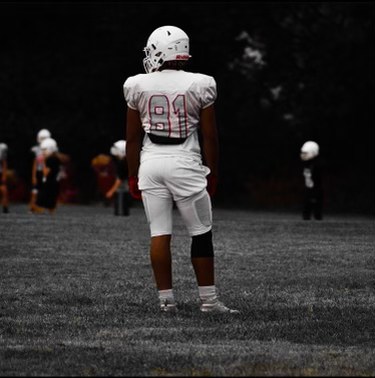 Awaiting the next play, senior Jailyn Jones anticipates the ball coming to him. Jones had two fumble recoveries this season and was ranked by STLHighSchoolSports.com. “Sometimes you have those moments on the field where you just need to breathe,” Jones said.

Starting with chest workouts, senior Jailyn Jones benches 320 pounds, excitement surging through his body as he listens to his friends cheer for him on the side, pushing him to give one more. Forcing out his last repetition, he set the weight down smiling from ear to ear—another personal record for him to beat.

Jones has been working out profusely, continuously pushing himself to achieve his goal of playing college football and in the NFL. Even with all the work he has put in, he imagines a future beyond football as well.

“I’m going to Missouri Baptist for a year, then [I will] transfer to [Division I]. I’ve made mistakes in the past, so my grades aren’t up to par for D1 at the moment, but nothing is going to stop me from going to the NFL,” Jones said. “But football isn’t [the] end game for me because I also got into bodybuilding and powerlifting, so I’d love to be a coach or a fitness trainer.”

Jones began playing football at the age of six for a football team named the Chesterfield Bears. After finding joy in the game, Jones went on to play for school teams throughout his academic career.

“I remember just seeing my cousins out there playing football and I really wanted to do it, so I told my parents ‘I wanna do that,’” Jones said. “I was the smallest kid and very energetic. I made sure I stood out [to coaches] and became the toughest kid on the team.”

By playing football, Jones is continuing his family’s tradition.

“My cousin, Jamaal Jones, played in the NFL as a wide receiver for the LA Chargers, and my dad played semi-pro. Football has always brought our relationship closer because we have that bond,” Jones said. “I think my favorite memory would be in seventh grade. I was running a play, and I could see my dad running the field with me and my cousin coming behind him jogging. That would be one of the best moments for me.”

With the support of his dad and friend Connor Combs, hitting the gym has become a sacred ceremony to Jones, working himself to exhaustion to improve physically and mentally.

“What got me started was seeing everyone doing better than me [and] I was stuck,” Jones said. “My teammates came and they were just so naturally talented off rip. At first, I thought I was pretty good until I was playing next to them. Seeing them and seeing where I could improve drove me to start working out, building my body and confidence, helping myself become better and better.“

The improvements in Jones were not an easy feat. Even when he lost motivation he continued to play because of the support that surrounds him.

“My main motivation is to become better than everyone and become the best Jailyn I could possibly be,” Jones said. “My support system would be my family and God, but my dad and Kobe Bryant [also] inspire me because [of] my dad’s work ethic and Kobe’s mentality.”

Due to the growing number of COVID-19 cases and football designation as a high-frequency contact sport, Jones’ senior football season was nearly canceled, causing him and his team to have to wait until a decision was made.

“At the beginning of the season, I wasn’t really paying much attention to things, so the near cancellation surprised me and I wasn’t ready. I thought we were just going to have a regular season. It felt like me putting so much into myself was going to waste, but then the season just continued regularly,” Jones said. “I did everything I could to just build myself up physically and mentally. I’m not gonna lie, I worked out till I hurt.”

Senior Bri Davis, a friend of Jones, witnessed his growth over the past four years. Admiring his ability to excel, she even found herself learning from Jones’ mindset.

“From what I have seen in Jailyn, physically and mentally, he has changed a lot,”  Davis said. “His build is bulkier, which is what he wanted, and his mindset is such a strong one. He’s always willing to help me out and give me tips. I can say there has been a great change in Jailyn.”

This year, Jones faced challenges not only in his sport but within himself. However, his love for football has always prevailed.

“I feel like I was born to play football. This has been my calling since day one,” Jones said. “The excitement and adrenaline that flows through me when I play made me realize how serious I wanted to take this sport.”