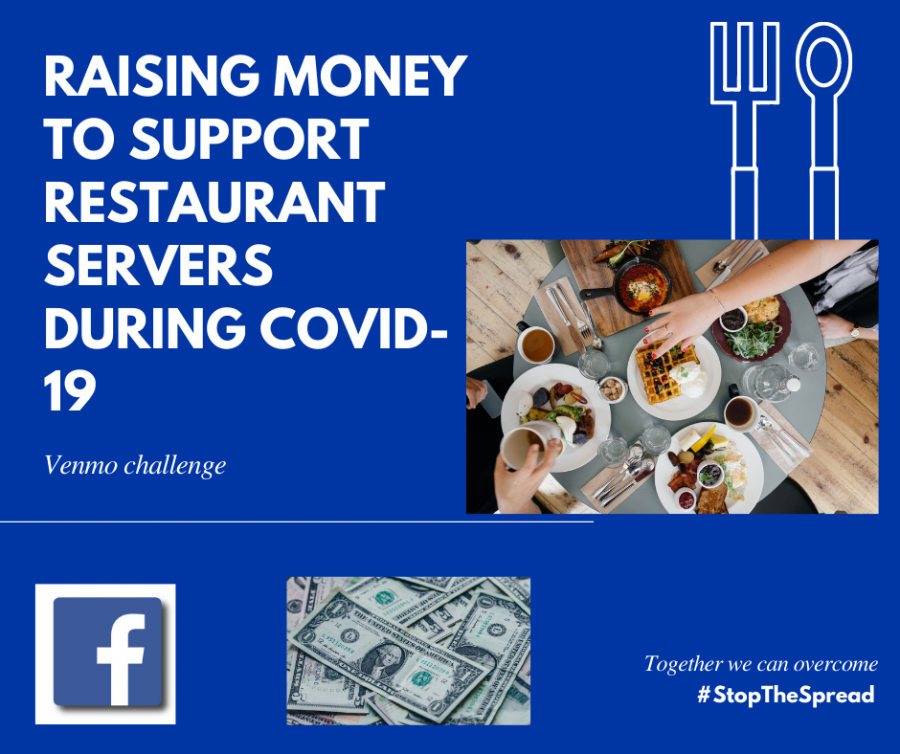 The Towsends orchestrated a Venmo challenge in which they raised money for a restaurant server.

From a simple post on Facebook, to a collection of $550, Math teacher Jason Townsend and his wife, Parkway North English teacher Valerie Townsend, made the day of the woman who served them breakfast at Chris’s Pancake and Dining, Friday Jan. 15.

The idea of accumulating money for a large tip occurred when V. Townsend saw a TikTok video made by a woman in Nashville, Tenn. who had “challenged” her followers to give any amount, even $1, via Venmo. The woman then collected funds over a small-time period to give as a tip to an unsuspecting server at a local restaurant. She did this for several individuals.

“We just thought it was a great idea and tried to do the same with our collective Facebook friends,” J. Townsend said. “We asked for any amount; some gave $5, a few even gave $25-$40. We were amazed at how much and how quickly people jumped on board. We told everyone that whatever the total, we were going out to eat and would then give the entire amount to a hard-working server. They all loved the idea too.”

On a Friday evening, The Townsends posted the Venmo challenge on both of their Facebook pages and collected all the way to the following Friday morning.

“We were really impressed with how much everyone wanted to be a part of this. When you put something like this out there, you never know if it will work or just kind of die, but I kept getting notices every hour with money coming in. It was exciting,” J. Townsend said.

Prior to teaching, both J.Townsend and V. Townsend worked in multiple bars and restaurants. For this reason, when they order takeout food they make it a point to tip extra. However, they found this challenge to be a good opportunity to do even more.

“We know all too well how hard the job can be and how little appreciation they get sometimes. We also know that when business dips, the money goes with it,” J.Townsend said. “Most servers only make $2.15 an hour and rely on the tips. We know that at the dinner places, the checks are always higher and the tips are usually bigger. We also love to go out for breakfast. Anyone who does this a lot probably notices these servers really work hard because they are always busy, and they turn tables quickly. However, the breakfast crowd doesn’t always generate the big tips,” J.Townsend said.

With their previous experiences and the knowledge that restaurants are down in business due to COVID-19, the couple finalized their decision for the tip. They were reluctant to go to a restaurant, but felt safe because the restaurant socially distanced and followed all the city guidelines.

“I suppose if Parkway thinks it is safe enough for us to be back in the classroom, a carefully planned restaurant outing is OK if the establishment follows all the rules,” J. Townsend said.

Donations, including their own, exceeded their goal amount of $500 by $50. With this, the Townsend’s went out to eat Friday morning, as students were off from school, so they had extra time in the morning.

“We attempted to ‘act normal’ until the meal was over. When she brought our check, I gave her my credit card for the bill and when she returned we explained to her what the challenge was, and I told her that she was going to be the recipient of our friend’s generosity,” J. Townsend said.

While successful, this challenge was only going to be a one-time shot. However, quite a few people who didn’t see the post before they gave away the tip insisted that the Townsends’ do it again, so that they could also contribute (Venmo: @Jason-Townsend-40). Thus, they are now well on their way to another fairly nice total; their next outing location has not been decided yet.

“My biggest fear was that we would get this all built up, then somehow have a bad experience and then still have to go through with it. Well, that was not the case at all. Our server was perfect. She was quick, polite, attentive and friendly. Our meal was perfect, and she could not have been more deserving,” J. Townsend said. “Once it became clear where I was going with my somewhat long-winded explanation, her [the server’s] hands started to shake a little. When I displayed the money–we made sure it was cash–and told her the amount, she broke out in tears and didn’t know what to say. We wanted to ‘hug it out’, but with COVID-19 we just smiled and told her she deserved it. She thanked us more times than I can recall, but really she was thanking all the people who chipped in. We just made the delivery.”