Teachers reflect on the importance of inaugurations 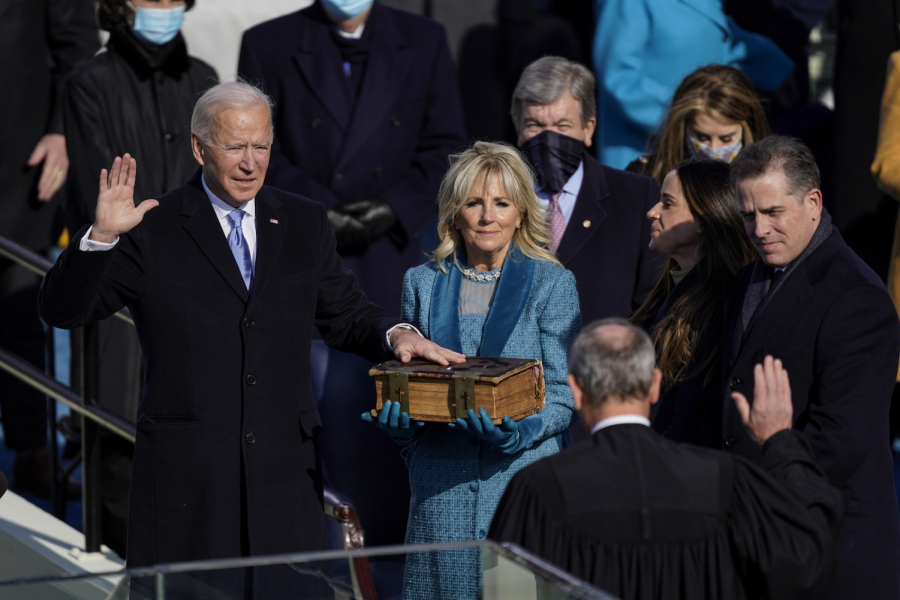 President Joe Biden takes the oath of office from Supreme Court Chief Justice John Roberts as his wife, first lady Jill Biden, stands next to him during the 59th presidential inauguration.

Many teachers paused their classes Jan. 20 and turned their attention to the inauguration of President Joe Biden. Students were masked and socially distanced as they watched Biden place his hand on the Bible and take the oath of office.

Why are inaugurations important?

Inaugurations are a sacred part of American politics, as every four to eight years we see the peaceful transition of power from one president to another. This precedent began in 1789 when President George Washington took the oath in New York City. Since then, every four years Jan. 20 at noon a new presidential term begins.

“The framers of the Constitution and members of the government wanted very much to carry on the British tradition of public transitions of power,” social studies teacher Zaven Nalbandian said. “It was always a part of colonial tradition that anyone who assumed power did so in a very public way.”

In modern history, inaugurations serve to unite the country and reduce partisan tensions. For example, after the hotly contested election of 2000, which was much like its 2020 counterpart, Bill Clinton and other Democrats attended Bush’s inauguration to cool national tensions. George W. Bush, eight years later, also attended Barack Obama’s inauguration.

“George W. Bush was there, Bill Clinton was there and Barack Obama was there, so you had three of the five living presidents in attendance, which is an amazing number, usually something that doesn’t happen very often,” Nalbandian said. “They had the three of them come together at the World War II Memorial, and they talked about the importance of moving the country forward.”

While some presidents were in attendance, the absence of former President Donald Trump at the inauguration symbolizes a new age of partisanship and divisiveness in America. On the other hand, the presence of figures such as Mike Pence and Sens. Mitch McConnell and Lindsay Graham, shows a willingness for some conservatives to work with Biden, who ran on a platform of bipartisanship and unity.

Though the trip was cancelled this year due to COVID-19, it has been a tradition for teachers to take their students to the inauguration. Social studies teacher Kristen Collins has been able to attend two inauguration ceremonies, Obama’s and Clinton’s. She has a personal connection to Washington D.C, as she served as an intern there during college. She had just arrived in the nation’s capital when she attended President Bill Clinton’s inauguration.

“I was young and idealistic, but also at that time there wasn’t as much political division as there is today. D.C. is obviously the epicenter of politics, and it’s discussed out there all the time,” Collins said. “I was just really excited to be living in a big city and loved the sense of power in D.C. It was a really festive atmosphere with bands playing on the National Mall in the days leading up to the actual inauguration. I got to be up fairly close to the Capitol Building, but they had giant screens set up so all of the people out on the Mall could see what was happening.”

“To have the first African American elected as president was such a huge deal, and I was lucky that I got to go to this event. We had well over 100 students from all four Parkway high schools, so logistically, it was a lot to handle. Because of the historic nature of the event, it was ridiculously crowded. It was very festive but very crowded. And this time I was an adult, in charge of a bunch of kids, so I wasn’t enjoying it quite as much because I had to worry about not losing a kid in the crowd,” Collins said.

This event took place in 2009, at the height of the Great Recession and subprime mortgage crisis. These factors were leading to a more divisive mood in the country.

“I was relatively optimistic. Even though we were still in the midst of the Great Recession, I was really optimistic that our country had elected an African American to the presidency,” Collins said.

Collins is not the only teacher who got to experience a presidential inauguration. Social studies teacher Melvin Trotier attended the Trump inauguration back in 2017.

“We signed up for the trip months before the election. We knew it was going to be Trump or Hillary. We had no idea,” Trotier said. “There were some on the bus with their Trump 2020 shirts, who were thrilled to go see Trump. There were others so mad that he was the president. One girl was in tears because she wanted Hillary to win so bad.”

Although there were protesters and supporters—Trotier described walking past the infamous Westboro Baptist Church—he said that partisan bickering stopped, if only for a few minutes, when Trump and Pence were sworn in.

“The Vice President went for his oath and everything got quiet. Even though we were watching it on the jumbotron and speakers, everyone went quiet and Trump took his oath. Then almost everyone cheered and clapped, but they weren’t being disrespectful, even though it wasn’t their president,” Trotier said.

Trotier was surprised that the crowd was a mix of spectators from across the aisle. People of every political ideology came together to witness the transfer of power.

“It wasn’t just Trump supporters at the inauguration. I would argue that it would have been true this year. In a violent society, there would have been people there to get a [glance] at the president, and to see that the government will be alright,” Trotier said.

Though the inaugural trip was cancelled this year, Trotier still finds it important to appreciate the traditions of our country.

“It is the single most important example of how America survives and thrives as a country. To see the peaceful transfer of power is the cornerstone of our democracy, regardless of who is taking the oath and your support of them,” Trotier said. “They are our president, for better or worse, and in that sense, we should all hope for their success in their term in office.”