It’s Not Black and White: Introduction 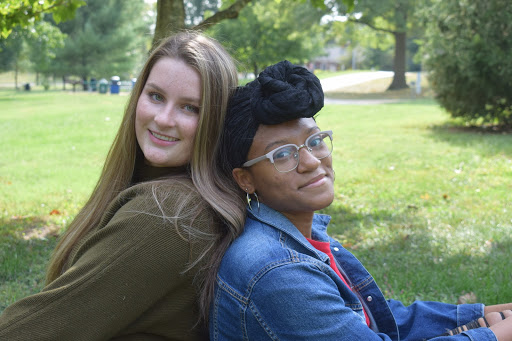 The hosts of It’s Not Black and White, seniors Zoe DeYoung and Bri Davis.

Transcript: [Calming instrumental plays, then quiets but continues to play in the background]

My name is Zoe DeYoung. I’ve lived in the suburbs of St. Louis all my life. Since my childhood, I have always been aware of what felt like this unbridgeable chasm between St. Louis county, where I live, and St. Louis city. And I heard warnings often of the dangers of the city; murders, robberies, gang violence, and drugs, to name a few. But what my young, white mind gathered from that was not the truth; I thought that because the city was dangerous, and the city houses many Black people, that Black people in general were dangerous.

I don’t believe that anymore, or I wouldn’t be sitting here today discussing race with you. First off, I understand now that crime in the city was not created in a vacuum, and that white people had their hand in this divide in many horrifying ways. I also better understand the power of stereotypes and generalizations, like the example I gave before. But, whether it be ignorance or lack of exposure, white people en masse hold internalized racism that permeates the lives of Black, Indigenous and people of color around us.

I don’t consider myself an expert on race in any way. Not one bit. I know that I am lucky to have had opportunities in my life that have allowed me to get the tiniest look into what being Black in America today looks like and I say that I am lucky because these opportunities are few and far between.

But, I know that these conversations need to be had. It is not the oppressed person’s job to fix the oppression; It is the oppressors job to understand that racism didn’t end when slavery ended, and that we, by not being anti-racist, are being just as bad as our ancestors who did the chaining.

My name is Bri Davis. I am doing this podcast to educate those who are willing to learn and even educate those who are not. People will say they are listening when really, as the saying goes, it is going through one ear and out the other. But, that doesn’t mean I am going to stop saying what I am saying. As a Black woman in today’s world, I want to be one of the people who stands up and makes the decision to educate and share the truth.

Now, of course, my perspective and viewpoint will be different from everyone else’s; there’s no doubt about that. As a Black female in today’s world, I feel as though I have to do something to stop the racism, the injustices, the constant ignorance of those who don’t care to talk about such topics in relation to the Black community and so on. I am tired of seeing it and I want to be a person who can change it as much as I can.

As Zoe mentioned, for example, Black opinion vs white opinion is something that needs to be talked about; it is a conversation that needs to happen. People don’t talk about the Black Lives Matter movement enough, or Black female empowerment because either they’re scared to, they don’t think anybody will care or they feel like their voice won’t be enough. But sometimes, that is all it takes, to start that chain of conversation. That is what this podcast is all about.

I hope to educate all and that includes teens, adults, parents, teachers––everyone. I hope to start a chain. I hope to spark something inside of people when they hear this podcast, something that  makes people want to go and do something good, to go and create change. Because in today’s world, change is what can make a difference, no matter how small or big.

Disclaimer: Just because we are primarily discussing race relations between Black and white, does not mean we don’t believe that other race oppression does not exist. We are coming at this from a personal perspective, but our hope is that as we grow, we can widen the conversation.  Our hope is not to offend, but to educate, and we are still learning ourselves.