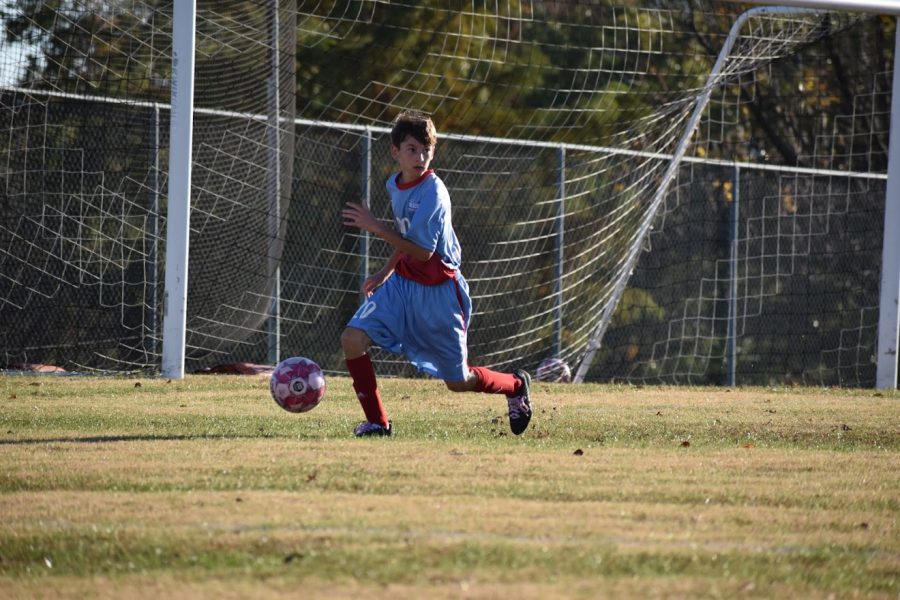 During a home game against Clayton Oct. 22, freshman Josh Seager kicks the ball away from the goal. Seager and his team played in honor of breast cancer awareness month. "The highlight of the game was honoring those affected by cancer, and even winning the game," Seager said.

To help spread awareness of the causes and impacts of the disease, October is Breast Cancer Awareness Month. Breast cancer is the most common cancer among women as of 2020, and the second leading cause of cancer death in women.

Students participated in the month by hosting an annual “Pink Out” night, where the soccer team raised awareness for the disease while playing.

Led by coach Emily Lovercheck, the freshman soccer team substituted their traditional red and blue laces and jerseys for pink attire to honor those affected by the disease.

“We wear pink shirts to warm-up and have breast cancer shoelaces,” Lovercheck said. “Before the game, we had a ceremony where each player had a certificate of who they were playing for, and we announced these names and hung them on our outdoor shed.”

As somebody who has loved ones who have, or had the disease, Lovercheck knows the importance of being aware of one’s health.

“I have personally had multiple people close to me that have been affected by breast cancer. It is a disease that affects many people and many families, and I think it is important to remind people to get screened,” Lovercheck said.

As a player on the team, freshman Josh Seager not only played for the school, he played for a loved one affected by breast cancer.

“The highlight of the event was playing for those affected by cancer and winning the game,” Seager said. “I played for my mom’s friend who died because of breast cancer, it was a good way to honor her.”

Freshman player Achyuta Ambal’s favorite part was getting to switch out his uniform for the day.

“One of the members’ moms does custom T-shirts, so she made a pink custom T-shirt for us,” Ambal said. “It was really cool, it had our last names and numbers on the back. We couldn’t wear them during the game, but it was still overall really fun.”

While wearing a pink uniform and playing soccer may not end breast cancer, the team’s goal is to inform people of the disease’s existence, and have fun while doing so.

“People can spread awareness by participating in ‘pink out’ nights, and educating themselves of the disease,” Seager said.