What does the D stand for? Sophomores strike a deal with SunnyD 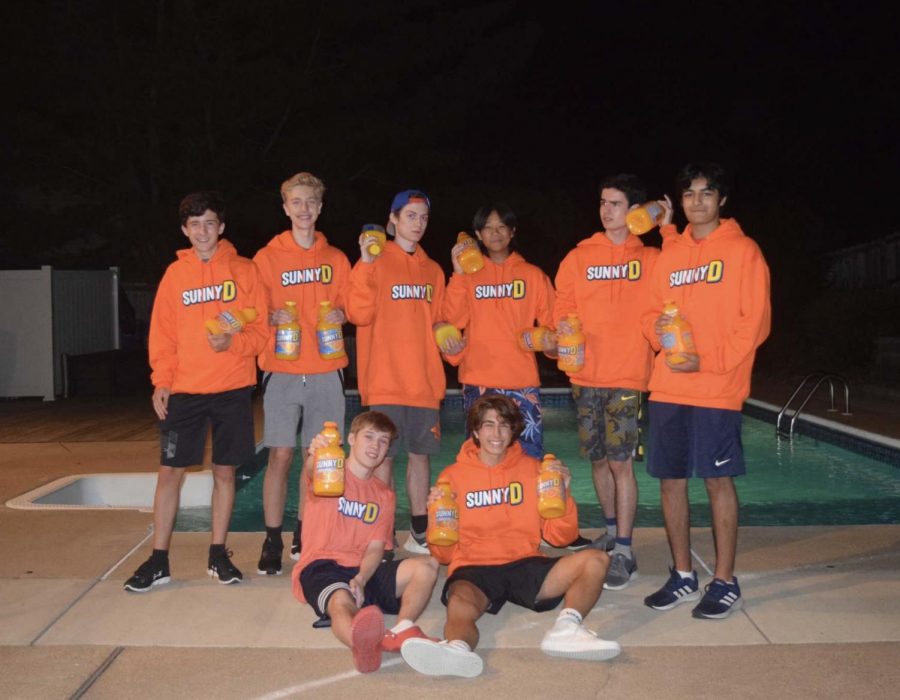 Modeling their SunnyD hoodies and T-shirt, sophomores Ethan Deulca, Chris Roy, Basil Metroulas, Patrick Chen, Chris Woodcock, Shiv Sharma, Jake Rushing and Jack Maniaci advertise a beloved childhood beverage. “[Sunny-D] is a very nostalgic drink for me. I remember going out to my fridge and getting a refreshing bottle of Sunny-D when I was little,” Rushing said.

“It all started when we walked to Dierbergs to get milkshakes,” Metroulas said. “We were all just wandering around and passed a fridge full of SunnyD on a $10 for 10 discount.”

After some brief consultation, the boys decided to purchase 10 gallons of SunnyD.

“After we checked out, we went outside to take pictures with the drinks to post on Instagram,” Woodcock said. “We tagged the official SunnyD Instagram in our posts and a couple of days later we got notifications saying they commented, which was pretty amazing.”

SunnyD later tagged some of the boys on their Instagram story, provoking direct message (DM) conversations.

“We all planned to hang out again on the Fourth of July and go back to Dierbergs, but for 100 bottles this time and [to] take more photos for SunnyD,” Sharma said. “I DM’d [SunnyD] about this idea, and they actually responded which got us even more hyped for it.”

On the Fourth of July, the boys cooperatively purchased 100 bottles of SunnyD for a photo shoot.

“We went back to Dierbergs and bought out their entire stock of SunnyD, so we had to go to another store for the 100,” Maniaci said.

The boys transported the 100 bottles back to their Fourth of July party and began taking a lot of photos for the company and for Instagram, including a video of Maniaci flipping over a configuration of the 100 bottles.

“I thought the company would like [to see me flip over the bottles]. It was 15 feet and I had never flipped that far before so maybe it wasn’t the best idea, but it worked out,” Maniaci said.

The boys later posted several images with their SunnyD to their Instagrams, prompting SunnyD to respond again.

“SunnyD saw our photos after we posted them and said to email them some of the photos and they would send us free hoodies,” Metroulas said.

Maniaci then emailed the company their many photos, along with shipment information for the merchandise. Sunny-D later uploaded the photos they received from the boys to their own Instagram page.

“After about two weeks, they shipped us 10 hoodies and an extra T-shirt for our posts,” Woodcock said.

The crew then met up again for one final photo shoot with their new merchandise. Metroulas believes it was a fun-filled finale for the series of SunnyD events, as the entire process was educational.

“It showed us how to maneuver with semi-large brands on social media, and how certain brands go about customer relations,” Metroulas said.

As the SunnyD deal participants go on with their lives, they all now have a common pastime: