Matt Cosgrove: from Division I volleyball player to football kicker 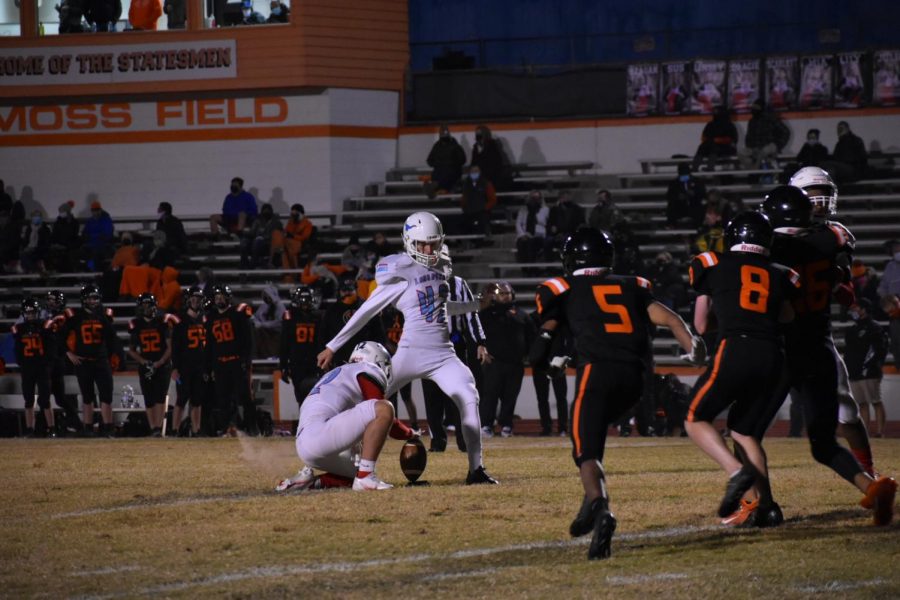 Kicking the ball deep into the end zone, senior Matt Cosgrove sends his team’s opponent, Webster Groves, back. Cosgrove started kicking for the team after his spring volleyball season was canceled last year. “I didn’t think we were going to have any games because I thought they would all be canceled due to COVID, but then we did, and I was excited,” Cosgrove said.

After missing his spring volleyball season, senior Matt Cosgrove took on the position of kicker for the football team.

Cosgrove fractured his hip his freshman year going into his first high school season of soccer. He finished out the season, but ultimately decided soccer was not for him anymore.

“I started [playing volleyball] my freshman year. My friend told me to come to tryouts as a joke, and I ended up making the team,” Cosgrove said.

“Matt and his mom, Megan, thought it was best to spend time training [for volleyball] rather than playing football,” head volleyball coach Susan Anderson said. “So, I was talking to coach Duncan and told him about Matt’s concerns, and he decided that he could work around Matt’s volleyball schedule.”

Cosgrove then decided he would play. His week became more hectic. He works out and trains, whether for volleyball or football, six days a week. So, he knew he would need to let his body recover. To recover, Cosgrove ices a lot and goes to the chiropractor once a week for his back and knees.

“Before I go into the chiropractor, my back has an aching pain and feels really tight,” Cosgrove said. “When I’m leaving, it feels looser and there’s less pain, I feel relieved.”

With all of the training, Cosgrove has become more comfortable kicking. On Oct. 3, Cosgrove kicked 25 yards, but just two weeks later, he kicked 336 yards. Over the season so far, he’s kicked 543 yards in 16 kickoffs.

“First off, having never played football before, there are nerves,” Duncan said. “But he’s worked hard each week to improve as a kicker and a field goal kicker for us. It’s been nice to see him settle in and feel like more of a part of the team.”

Cosgrove gets along well with his teammates, it is his motivation.

“I just want to have fun with everybody and to keep up with the team,” Cosgrove said.