Voting is not enough 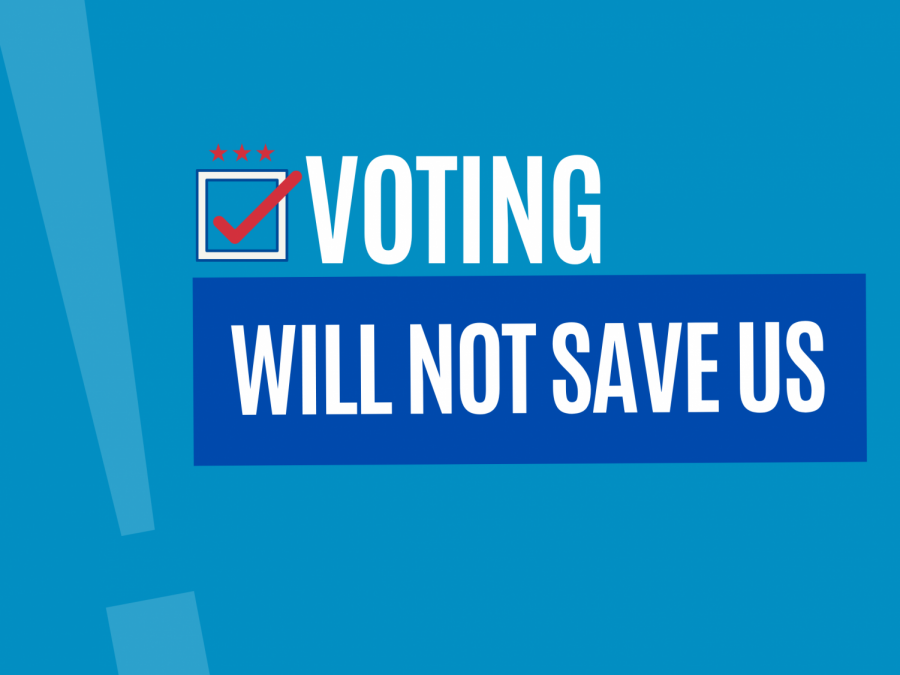 With the 2020 election, it is important to understand the limits of the ballot box and why it is necessary to expand our political imagination beyond voting to achieve liberation.

Every four years, we are inundated with the same get out the vote campaign messages. “Vote because people’s lives are at stake. Vote because it is one of the most important elections of our lifetimes.” But after every election, nothing seems to fundamentally change. Audre Lorde once said “For the master’s tools will never dismantle the master’s house. They may allow us temporarily to beat him at his own game, but they will never enable us to bring about genuine change.” While Lorde was critiquing white feminism at the time, her analysis can apply to electoralism too. Voting is the master’s tool, and while it can bring some reforms, it will not lead to true liberation. The ballot box alone will not save us.

Electoralism is used to contain movements for change

Democrats have a history of pacifying resistance and watering down demands for transformative change. They use false solidarity to pretend they side with us, while ignoring our demands and telling us instead to vote blue. As if putting a Democrat instead of a Republican in the Oval Office or Congress, which inherently operate in the interest of this settler state, will fix racism or put an end to colonialism. It can’t and it won’t. Politicians control and institutionalize our justified rage, while making sure nothing fundamental changes.

For example, after this summer’s national uprising against policing, neither presidential candidate has committed to doing anything significant to end police violence. In fact, while he supposedly embraces racial justice, Democratic candidate Joe Biden has said that he will not defund or abolish the police, a major demand of the Black Lives Matter movement. In fact, Democrats make it a point to say that they are pro-capitalism, pro-police, pro-military ect. in their campaigns so much so that they can end up sounding like Republicans.

This liberal co-optation of social movements has happened countless times and it’s proof that elections in the United States are an illusion of choice. Republicans and Democrats are just different sides of the same coin. There are minor political differences between the parties, but little would change with one party in power over the other because both serve the interests of the same capitalist class. Democrats are not inherently better just because they are not Republicans. Democrats also enact structural violence and systemic oppression domestically and abroad and they won’t stop doing that because it serves their bottom line. Think of former president Barack Obama’s “accomplishments”: record deportations, murderous drone strikes, embracing big pharma etc. Obama enacted things like the Affordable Care Act, but that does not “balance” the violence committed under his administration. Violence is not “safer” just because it comes from Democrats.

The American political establishment, no matter which party it is controlled by, is always pro-war, pro-imperialism and pro-Empire. These things are a bi-partisan effort. And it is because of this fact that voting will not lead to as much significant change as people hope it will.

Voting is just one tool

Voting has not led to much change because it rarely threatens the powerful’s class interests. When we think of voting as our only tool, it ignores the historical reality of how “progress” has really been made in the United States. It happens—and continues to happen—through organized resistance movements, ones that threaten the status quo and the power structures existing under racial capitalism. Think of grassroots struggles like the Black Panther or Disability Justice movements. They did not achieve their wins by voting for a president but did so through organized and revolutionary protests. We live in this small box of electoralism and hardly consider the possibilities of change outside it. There are other tools in the tool box and we must use them to achieve our collective freedom.

Voting on stolen land does not undue settler colonialism

The United States was built on Indigenous genocide and slavery. So what does it mean to vote for the rulers of a country that operates on stolen land? The ballot will not dismantle colonial domination or white supremacy. It will not decolonize the country or hold itself accountable. What the ballot box does however, is make voters feel better. Voting in the context of settler colonialism is a “settler moves to innocence” action. As Eve Tuck and K. Wayne Yang explain, “settler moves to innocence are those strategies or positionings that attempt to relieve the settler of feelings of guilt or responsibility without giving up land or power or privilege, without having to change much at all.” When the ballot box is used alone and with no followup actions, it does nothing to reduce the harm that Indigenous communities face.

As Americans, we rarely think about how our votes or policies impact Indigenous people, let alone people living in other countries impacted by American imperialism. We don’t think of the harms of militarism and poverty. Our scope of understanding structural violence is limited, much like the impacts of the ballot box. So instead of this endless cycle of voting, as Indigenous Action puts it, we need to ask ourselves “what is the real and tragic harm and danger associated with perpetuating colonial power and what can be done to end it?” The answers to this question will take individual and collective reflection and political education, but following Indigenous leadership will allow us to understand how we can work to weaken colonial systems instead of being complicit in their violence.

I am not here to shame anyone for voting (or not voting). Voting is important, but it is just not enough. We can not let a check box every two or four years be the only action we take for marginalized people. We can not assimilate and invest all of our hope and energy in this fundamentally unjust electoral system. A friend once posed the following questions to get me to think of ways to shift away from electoralism: “What if we invested in communities instead of campaigns? We devote countless hours canvassing for political candidates. What if we used that time instead to check in on our neighbors and engage in mutual aid?” She is right. We can not continue to rely on voting and politicians to be our saviors. We must do the work ourselves.

You may live with privilege, benefiting from the status quo and wondering why you should care about what I have to say. If you are a student, you are likely not even able to vote. But as I write this, millions of people can’t afford healthcare during a global pandemic, are on the verge of being evicted and are still being terrorized by the police. So simply put, it is your responsibility to care. And with voting not being able to bring the necessary change, we have to expand our political imagination beyond electoralism. After tomorrow’s election, the work continues. What are your post-election plans to fight for liberation?