Despite a pandemic, students and teachers exercise their right to vote 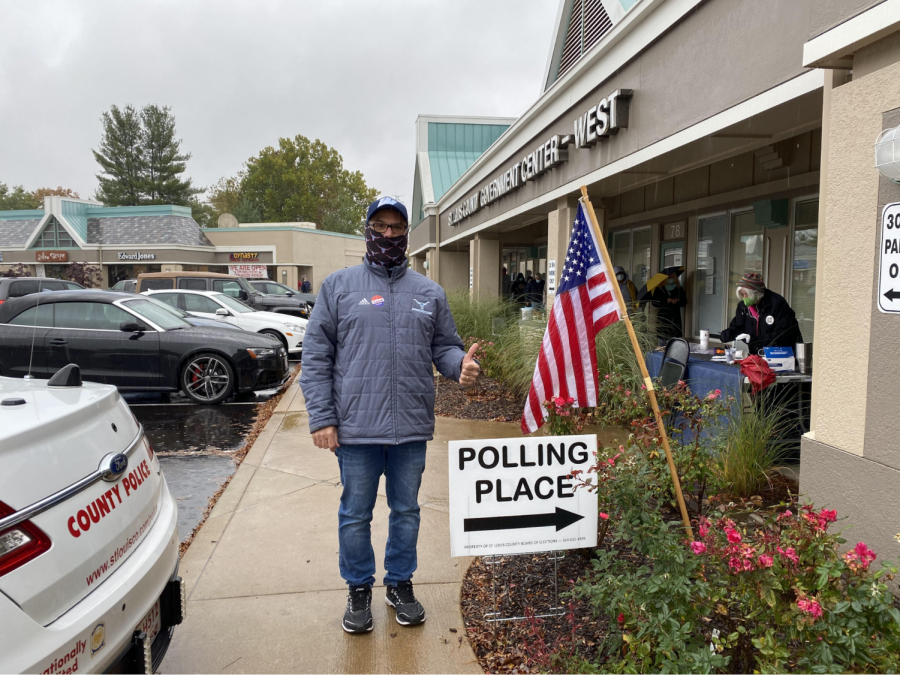 History teacher Zaven Nalbandian stands outside of a polling place at the St. Louis County Government Center. Nalbandian experienced socially distant lines, mask wearers and a comfortable and tolerant feeling in the air. “I stood in the rain for the chance to once again exercise my right. I was feeling nostalgic as I thought back to that Tuesday in November in 1988 when I walked into the gym at Francis Howell North High School and punched the card," Nalbandian said. "St. Louis County is still using those old voting stands that look like ‘80s suitcases, but there are no more punch cards. I did get to keep the pen they gave me."

As the 2020 election season comes to a close, students and faculty alike are preparing to vote on Nov. 3. This is seniors’ first time at the ballot, and for teachers, their first time voting during a pandemic.

Senior Bri Davis turned 18 just a few days before the election. This is her first time voting.

“If I’m being honest, I have always wanted to vote,” Davis said. “I’m a huge person when it comes to using your voice for positive things.”

Davis says that this election is beyond politics.

“There are so many things to think about in this election. Not only with Donald Trump, but also with Joe Biden. You genuinely have to sit there, think about it, and make the right decision. It’s, in my opinion, a really strong and serious election,” Davis said.

The Black Lives Matter movement, which reignited this summer, is what pushed Davis to vote.

Senior Gaby Jez is still making up her mind whether or not she will be voting. Jez says that voting is a deeply personal matter and should be thought out.

“I’m still not sure if I’ll be voting this year. I’ve been watching the news closely. I do have a candidate in mind, I’m just trying to decide if I want to vote or not,” Jez said. “Deciding to vote is a personal choice, and that choice takes a lot of time to decide. It’s still in the air if I want to vote or not. I need to find out the candidates’ ultimate goals and how they would help our country. I just need to find out more information about the candidates.”

Candidates are not the only thing in this election that need to be pondered. Students and teachers are both weighing the pros and cons of voting in-person or voting by mail. Davis says that voting in-person will create a mutual experience with her, her mother and her community.

“I was going to mail [my ballot] first, because I was too scared of COVID-19, but then I just felt like voting in person. Going to the polls will have more of an impact on me, personally. I’ll be getting that physical experience whether I’m wearing a mask or not,” Davis said.

Davis’ mom, being a court clerk, encouraged her to get educated on the candidates and issues surrounding the upcoming election.

“I look on social media and sometimes I’ll read articles, but I mainly get it from my mom. She’s like, ‘you need to know about these things,’” Davis said.

Teachers are also weighing the benefits of voting in-person. English teacher Kim Hanan-West has been vigilant regarding COVID-19 precautions. However, the virus will not hold her back from going to the ballot box in person.

“I’m very concerned that there will be opposition to the mail-in ballots,” Hanan-West said. “I feel that it is very important in this election that, if you can mask up, to vote in person.”

Voting is a family tradition for Hanan-West. She loves to exercise the right that past suffragettes and her family fought for.

Hanan-West references “The Soul of America,” a new documentary on HBO. She believes that Jon Meacham perfectly encapsulates the struggle that our country is going through.

While Hanan-West is an English teacher, she still considers herself a student of literature. Her readings have influenced her political identity and love of politics.

“I’ve studied speeches, documents and historical pieces for both their literary merit and impact on history. I’m interested in politics because it has direct bearing on our future,” Hanan-West said.

Education is a policy that influences how Hanan-West votes.

“Education has really borne the brunt of the impact of the pandemic,” Hanan-West said. “I feel like education is one of those things that’s really deeply embedded into the promise of America and the idea of the American dream. In order for anyone to achieve life, liberty or to pursue happiness, they need access to a quality education.”

As someone with family members who are vulnerable to COVID-19, Hanan-West will be taking many precautions at the ballot box.

“I always mask. I have a face shield, so I’ll wear that. As soon as I leave, I have my hand sanitizer and as soon as I get home, I’ll use soap and water,” Hanan-West said.

History teacher Jim Hermann votes in every election, but this will be his first time voting absentee.

“I decided to vote absentee this year because of COVID. It was easy. Thirty minutes in and out with incredibly friendly workers,” Hermann said.

Students and faculty, voting or not, believe that this election will shape our country for years to come.

“It’s so much more important because the stakes are higher,” Davis said, “It’s a happy feeling because I get to use my voice. I finally feel represented.”