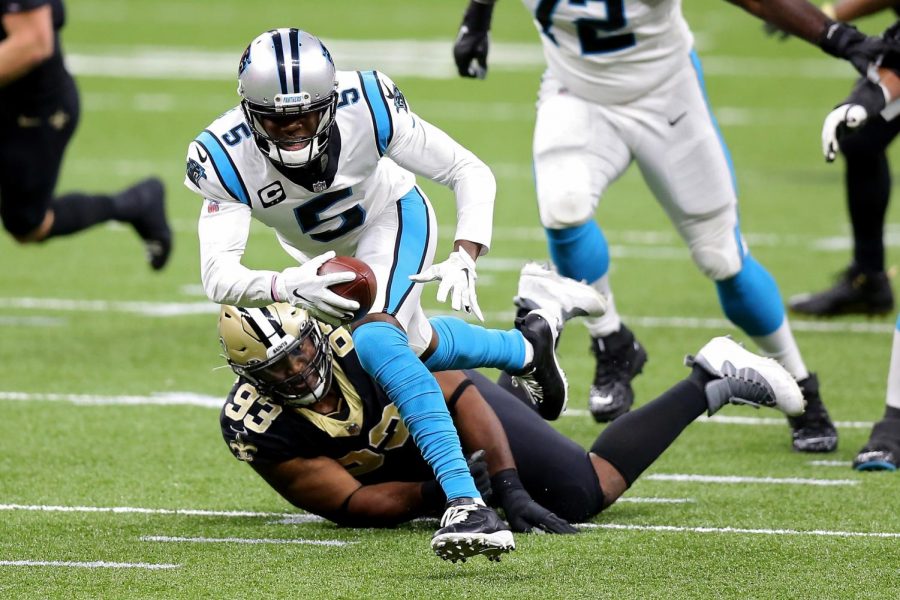 Carolina Panthers quarterback Teddy Bridgewater (5) runs with the ball while being tackled by the New Orleans Saints' David Onyemata (93) in the first quarter at the Mercedes-Benz Superdome in New Orleans on Sunday, Oct. 25, 2020.

What do Steelers receiver Chase Claypool, Chargers tight end Hunter Henry and Seahawks running back Chris Carson all have in common? They all scored less than five points in week seven. All three of these men were set to play great football, but last week they struggled. Claypool had the worst game among the three of them, scoring negative points.

On top of that, we lost another star player to injuries. Browns wide receiver Odell Beckahm Jr. tore his anterior cruciate ligament (ACL) early in his game last Sunday.

With all of the chaos of the NFL it’s hard to know who you should be starting. Which is why I’m here to help bring you a win this week in fantasy football.

Thursday night matchups are always so disappointing. This week we get to see the one-win Falcons play against the three-win Panthers. Atlanta quarterback Matt Ryan is coming off a game that was devastatingly lost by his defense, in which he threw for 338 yards and a touchdown. On top of that, he gets to play against a defense that scored literally no fantasy points last week—I wish I was joking about that. Ryan is a definite start against Carolina. Teddy Bridewater, the Panthers’ quarterback, is coming off a pretty good game himself. With 254 passing yards and two touchdowns, Bridgewater posted 19.16 points last week. And against this Falcons defense, who couldn’t even stop the Lions, I don’t see why he can’t play just as good. You should start Bridgewater.

On Sunday, we have Cam Newton and the Patriots traveling into Buffalo to play Josh Allen and the Bills. Despite all the hype around him, Newton has had a really poor performance so far. He still has yet to break the 1,000 yard mark and he’s only thrown for two touchdowns. It might be time to let Newton go and find a new starter. Meanwhile, Allen is having an MVP caliber season, other than what happened against Kansas City where he only threw for 122 yards and an interception. Allen is already at 2,018 yards and 14 touchdowns this season. On top of that, he is going against a Patriots defense who gave up 33 points and scored negative one fantasy points last week. Allen will be a good player to start this week.

For Monday night football, the Buccaneers are scheduled to face off with the Giants. Tampa Bay quarterback Tom Brady is having another great year with 1,910 yards and 18 touchdown passes. The 1-6 Giants defense is really going to have a hard time stopping him this week. Brady will put up great numbers, like always, and should start. New York’s quarterback, Daniel Jones, had a great week last week, scoring 20.6 points. However, a great week for Jones is an average week for other quarterbacks in the league. Jones just isn’t talented enough to start on any fantasy teams, and should stay on the bench this week.

Falcons running back Todd Gurley II was somewhat unproductive last week, only churning out 63 yards. However, he did put up two touchdowns, allowing him to score 20.2 points. Against the Panthers, who have struggled to stop any sort of run, I can see Gurley powering through for over 100 yards and one or two touchdowns. Panthers running back Mike Davis can not say the same about his performance last week. He only posted 12 yards the whole game, giving himself 3.6 points. Davis has averaged 10.5 points all season, which isn’t good enough to be starting on any team. Start Gurley; sit Davis.

Sunday we have the winless Jets coming into Arrowhead Stadium to play the reigning Super Bowl champions: the Kansas City Chiefs. Starting for the Jets, we have 37 year-old Frank Gore, who has 310 yards this far into the season and no touchdowns. For the Chiefs, rookie running back Clyde Edwards-Helaire has been phenomenal with 551 rushing yards, second in the NFL, and two touchdowns. Since the Jets have struggled to stop any offenses so far this year, I don’t think they’ll be able to stop Edwards-Helaire. However, after the Chiefs held the Broncos offense to only nine points last week, I don’t see Gore breaking loose for anything special. Edwards Helaire is a must start, while Gore needs to sit.

Monday night, we have Tampa Bay’s running back Ronald Jones II pairing up against New York’s running back Wayne Gallman. Gallman played decent last week, putting up 11.4 points, but that was against the Eagles. This Bucs defense is no joke, averaging 10 fantasy points per game. Gallman is going to struggle breaking free for any big plays on Monday and will probably be held to less than 10 points. Gallman should sit. Jones, on the other hand, only put up 9.6 points last week against a great run stopping defense with the Raiders. The Giants’ run stop doesn’t even compare to the Raiders and I see Jones running circles around them all game long. Jones definitely should start.

Thursday night, we have two star wide receivers: Calvin Ridley and Julio Jones. Both are playing for the Falcons, which hurts their fantasy value because they have to share receptions, but not by a lot. Ridley leads the team in receiving yards with 615 thus far, but now that Jones is fully healthy, I can see him putting up numbers just as good as his colleague. Jones and Ridley are both great starts for this week. For the Panthers, Robby Anderson is leading their team with 640 yards and a touchdown. Anderson has great big-play value, averaging 13.9 yards per catch. Anderson is another definite start this week.

The Colts travel north into Detroit this Sunday to play the Lions. For the Colts, T.Y. Hilton leads the team with just 242 receiving yards and doesn’t have enough value to be a starter on your team. The Lions’ star receiver, Kenny Golladay, is having a great year, posting 338 yards and two touchdowns. Golladay is a must start this week. However, he isn’t the only great passing threat for Detroit. Tight end T.J. Hockenson has been a great play at tight end all year, averaging 8.6 points per game, and he would be a great player to start in week eight.

This week for the Buccaneers, you should obviously be starting their stars like receiver Mike Evans and tight end Rob Gronkowski. But a great waiver-wire receiver would be Scotty Miller. Miller is leading the team in receiving yards with 365 and is only rostered in 13.3 percent of ESPN Fantasy Leagues. Although he is the Bucs’ third wide receiver, he gets the most targets out of anyone because of Brady’s frequent check-down passes. Miller would be an awesome pickup for your team. As far as the Giants go, Darius Slayton has been as good as a Giants receiver can be, posting 429 yards so far. I would like Slayton a lot more if he had a better quarterback than Daniel Jones throwing to him. And with the Bucs pass rush led by Vita Vea, I don’t see Slayton getting very many accurate targets, so he should be sitting this week.