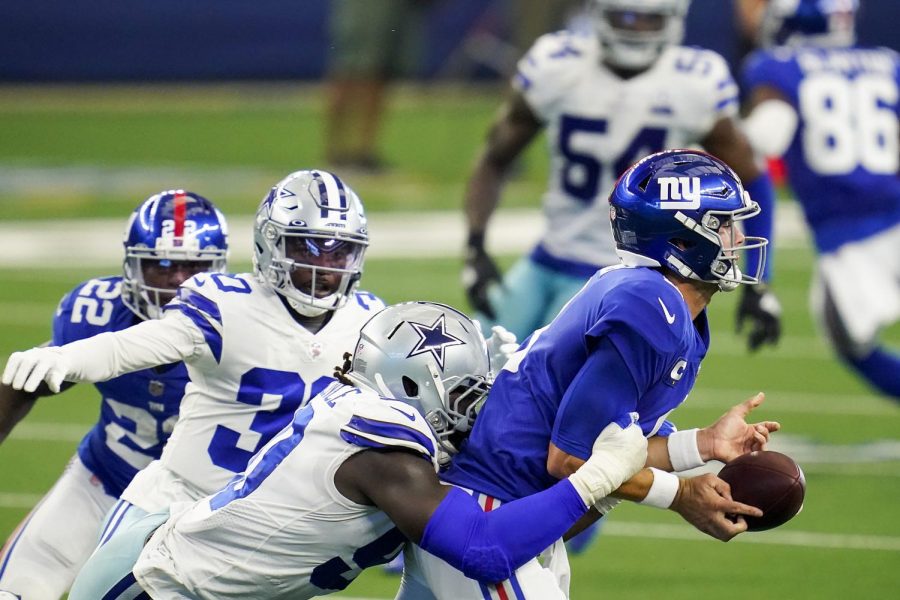 New York Giants quarterback Daniel Jones (8) fumbles as he is hit by Dallas Cowboys defensive end DeMarcus Lawrence (90) during the second quarter on Sunday, Oct. 11, 2020 at AT&T Stadium Stadium in Arlington, Texas. Cowboys cornerback Anthony Brown (30) recovered the fumble and returned it for a touchdown.

The NFL is weird. Sometimes players are on top of their game, and other times they have an off week. The worst part about it all is that it’s super unpredictable. Even Prime time

performers have their off days, and sometimes a no-name receiver steals the show.

In his game against the Texans, Titans running back Derrick Henry rushed for 212 yards and two touchdowns. However, Steelers wide receiver Chase Claypool, who scored four touchdowns in week five, only had one this week and just 74 yards to add to his total.

So whether you have unpredictable guys who need some management or you just need some advice on your bye week players, I’m here to help.

Thursday night we have a prime time match up between the one-win Giants and… one-win Eagles, where everybody sucks. Giants quarterback Daniel Jones has thrown twice as many interceptions, six, as he has touchdowns, three, this season. On the other hand, Philadelphia’s quarterback Carson Wentz does have eight touchdowns, but he also has nine interceptions. Both of these guys should be sitting, but, honestly, they shouldn’t even be on your team.

Sunday, Detroit travels south to Atlanta to face off with the Falcons. Lions quarterback Matt Stafford is coming off a 12.3 point performance last week and is looking to put up more against a mediocre Falcons defense. However, Falcons quarterback Matt Ryan finally hit his stride last week, airing out for four touchdowns. I like the idea of both of these guys starting against some of the worst defenses in the NFL. They should put up big numbers this week.

Monday night, Nick Foles and Jared Goff see each other in Los Angeles. The Rams defense has looked great so far this year and I don’t see anything getting in their way, especially not the Bears offensive line, which has given up 11 sacks this year. I don’t think Foles will have enough time in the pocket to get good passes off, meaning he should sit this week. Goff, on the other hand, is a must start against this Bears defense. The Bears pass rush last week struggled, with zero sacks against the Carolina Panthers, and I don’t see it doing much better against this Rams offensive line.

On Thursday, Eagles running back Miles Sanders is listed as out with a knee injury. Although they are going against one of the worst run defenses in the NFL, second-stringer Boston Scott just isn’t good enough to get a start on your team. Ever since Saquon Barkley got injured, the Giants running game just isn’t good enough to start anyone. They’ve run with three different “starters” since the week two injury, and all three of them, Devonta Freeman, Wayne Gallman and Dion Lewis should sit this week.

Sunday, Henry is fighting with the Pittsburgh Steelers defense. Coming off of another amazing start, Henry should be able to steamroll this top-five defense. The Steelers secondary is so intense, it’ll force Tennessee to run the ball more, giving Henry more touches and opportunities in this game. For the Steelers, James Conner is going to try to put up average numbers this week, but I can see him coming up short, as the Steelers will try to pass more, given that the run game with Conner hasn’t been there all season long, averaging just 13.8 points per game. If you have Henry on your team, he needs to start, but if you have Conner, you might need to look for other options.

In the Bears at Rams game, David Montgomery of Chicago is going to have a bad day. Against edge rush elites like Aaron Donald, Montgomery is going to be stopped at the line a lot this Monday. However, Rams running back Darrell Henderson is going to have a phenomenal game and I can see him putting up a lot of receiving yards out of the backfield, helping him add to his fantasy points and leading your team to a win.

For the Giants, I have really liked Darius Slayton all year long. So far, he has 406 yards and three touchdowns. With the Eagles defense allowing 20.6 points per game, I can see Slayton posting over 100 yards and a touchdown or two. Slayton should be starting. For the Eagles, their tight end Zach Ertz is out for the next five weeks with a leg injury, allowing for the receivers to get more targets. Leading receiver Travis Fulgham has been very efficient this year with 294 yards and three touchdowns. If you need a good receiver, Fulgham is a must start.

Sunday, the 49ers travel east to New England. San Francisco’s tight end George Kittle, despite the injuries, has looked amazing all year, and I consider him a top-three tight end in the NFL. Against this older New England defense, I can see Kittle torching them and putting up more than 150 yards and a touchdown. For the Patriots, Julian Edelman has been leading the team in receiving with 302 yards, but he still has no scores. Edelman should remain on your bench until he can hit his stride this season.

For the Bears, Allen Robinson II has led the charge with 474 yards and two touchdowns. Facing the Rams secondary, who has just four interceptions and no defensive touchdowns, I can see him gaining 100 more yards on Monday night, so Robinson is a must start this week. For the Rams, Cooper Kupp has 374 yards and two touchdowns as well. Kupp has done a phenomenal job getting open this season, and Monday night should be more of the same. Kupp should start this week.