Football season set to begin outside of St. Louis County 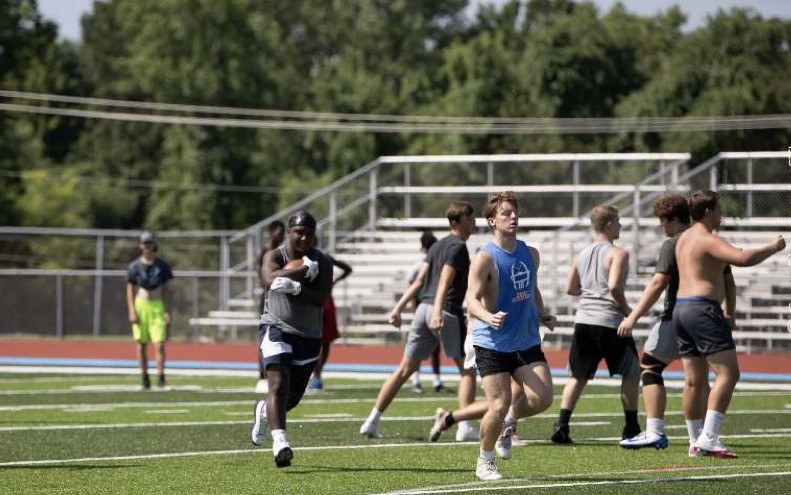 Practicing different plays with his team, senior tight end Josh Gansen works to improve his footwork and concentration while on the field. With the team set to play their first game Oct. 3, the players continue working to make sure they are prepared. “The whole team has been working really hard on and off the field for the first game,” Gansen said. “We are all ready to go out and do what we do against an actual team now opposed to just practice.”

After weeks of anticipation on whether there would be a football season or not, Parkway has made the decision to allow teams to participate in games outside of county lines following County Executive Sam Page’s ruling.

The ruling stated that all moderate-to-high frequency sports involving athletes above the age of 14 were not allowed to participate in games or tournaments, which prevented many Parkway sports teams from competing.

“Our players were ecstatic when they found out that we were going to play football. It’s what they have been waiting for all fall,” varsity football coach Jeff Duncan said. “They have worked so hard in the off-season and deserve a chance to play.”

Following the announcement, players started coming to practice with the mindset that they would be able to compete in the near future.

“Ever since the start, we’ve all been practicing hard trying to get better every day; that has not changed,” senior defensive tackle Connor Combs said. “However, the energy a game brings is unlike any other. There is more energy and a chip on our shoulder since we’ve been out of football for longer than usual.”

The first game is scheduled for Oct. 3 and will take place against Lutheran North High School at Francis Howell.

“It feels good to be on the field and play in front of people again,” junior safety Seth Young said. “People were doubting it, but I always tried to stay positive. The team is working harder and pushing themselves to get better for all the games ahead of us.”

Despite having a season and schedule that will look far from normal, many players are just grateful to be back on the field.

“As cliché as it sounds, I will go to practice everyday looking forward to being with my brothers on that football field,” Combs said. “Just enjoying every moment while I am there is the most important because football isn’t guaranteed.”