Moving with a Mission 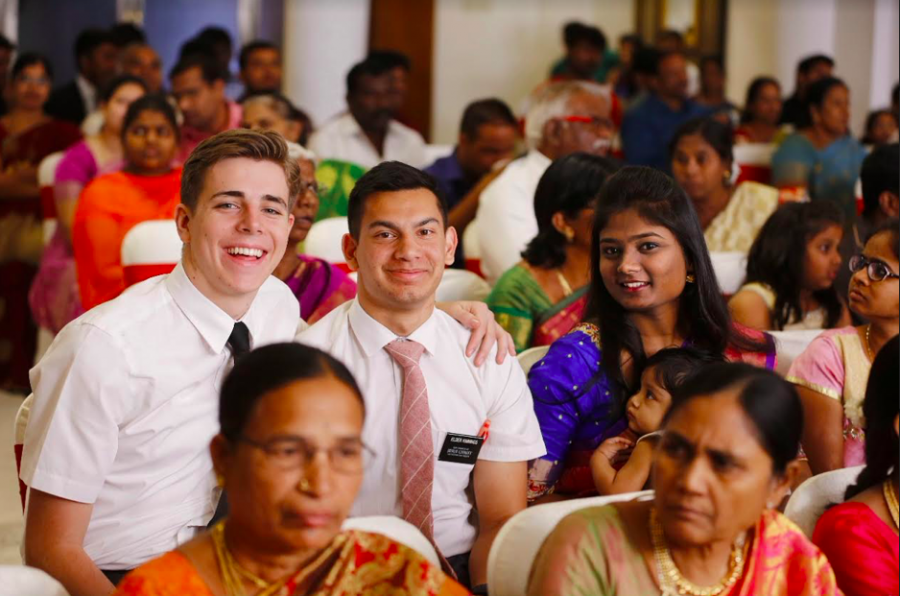 Bonnett and his companion attend a wedding while serving in India.

While the average 19-year-old is off studying at college or beginning a new job, some choose to put these plans on pause to serve a mission for the Church of Jesus Christ of Latter Day Saints (LDS), many alumni included. Beginning at the age of 18, boys can opt to serve the LDS church for a two year commitment; girls can serve for 18 months once they turn 19. While several  alumni have gone on to serve, here are stories of three alumni who have completed missions.

“Missionary service for the Church of Jesus Christ of Latter-day Saints is 100% volunteer, so it was a tough decision to make for myself to leave my friends and family for two years to serve Christ,” Huges said. 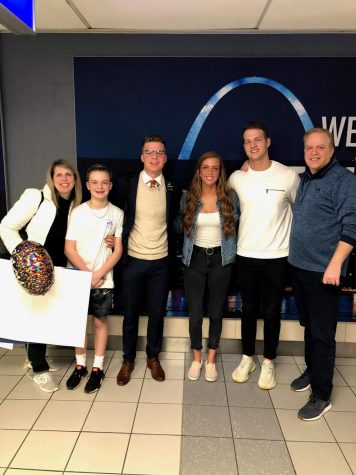 After their information is sent to the Church headquarter, many soon-to-be missionaries gather loved ones together when finding out the specifics of their service via email.

“It’s crazy to open because no one ever knows where they are going until they open. Lots of times people will invite friends and family over for the opening and make it a big event, it’s pretty fun,” Hughes said.

After missionaries receive their assignments, they report to training at Missionary Training Centers (MTCs). Missionaries can be called to serve at various colleges and universities, such as Hughes who served at the Fort Collins Mission, in Colorado.

“One of my favorite experiences on my mission was to be able to serve on the University of Wyoming campus. I got to be around college students all day and talk to them about God. I met some of the most down to earth people. It was way cool,” Hughes said.

During his mission, Hughes found that not all people were welcoming to him.

“You get a lot of rejection, way more than you get accepted. So that could be really tough at times but Christ went through it too,” Hughes said.

After completing his mission earlier this year, Hughes hopes that others are accepting towards missionaries serving today and in the future.

“I  want people to know that all missionaries try to do is help ease their burdens and find more happiness in their lives. So let them in, let them serve, they are just there to help in anyway,” Hughes said.

Drew Bonnett
After his freshman year of college, alumni Drew Bonnett ‘16 chose to serve as a way to share his faith with others.

“The fundamental purpose that missionaries learn is to ‘invite others to come unto Christ by helping them receive the restored gospel through faith in Jesus Christ and His Atonement, repentance, baptism, receiving the gift of the Holy Ghost, and enduring to the end.’ We believe that Jesus Christ has invited all to follow him,” Bonnett said.

There are opportunities for missionaries to serve outside of the United States.Bonnett was assigned to serve at the India Bengaluru Mission.

“I’d heard of people going to other countries, but I had never heard of anyone going to India, so I was super excited and surprised because I had no idea there were even missionaries in India,” Bonnett said. “Living within the United States I think that we come up with a perception of what other countries will be like, but until you actually go to the country, you don’t actually understand what a culture or a country is like.”

Though originally being assigned to travel to India, Bonnett was temporarily transferred to help in Boise, Idaho due to a delay in receiving his travel visa.

“I was kind of sad at first, but I actually learned to love it in Idaho,” Bonnett said. “It was easy for me to connect and communicate with people but the most important thing I learned in Idaho was that no one was going to make me do anything; my mission was really up to me.”

After spending almost three months in Idaho, Bonnett was instructed to pack his bags before leaving to finally serve in India. Though Bonnett often dealt with cultural and religious differences, he strived to help others in any way possible.

“Even though in some places we didn’t find a ton of people that were interested, we would still try to find opportunities to talk to people and to serve people,” Bonnet said.  We would give up our seats on the bus for people who wanted to sit down to show through our actions that we were kind,” Bonnett said.

While serving in India, Bonnett was not always accepted for his faith.

“There’s a lot of hatred of Christianity in India. There are political parties and part of their agenda is to exterminate Christians. So, we had to be careful about telling people who we were and what we were doing,” Bonnett said.

Bonnett learned more about understanding during his service in India after returning last year.

“Missionaries are people too. There’s a lot of hate in the world and there’s a lot of contention around religion, but I think it will continue to be that way unless we begin to understand each other,” Bonnett said. “I think that everyone wants to be understood. I hope that instead of looking for opportunities  to contend with one another, we should try to be happy and to accept one another’s differences with a smile.”

Elaine Pfeil
In the fall following her high school graduation and 19th birthday, alumnus Elaine Pfeil ‘16, began her mission in San Fernando, Calif.. Though missionaries opt to serve, they are assigned their service opportunities and locations by the Church.

“In order to serve you have to meet with your bishop and other leaders and fill out paperwork with them. This paperwork is then sent to our Church headquarters in Salt Lake City, Utah where our modern day Apostles pray and decide where each individual will serve specifically, and you can go anywhere in the world speaking any language,” Pfiel said.

Some missionaries serve at various locations within the United States that speak a different language. Pfeil served outside of Los Angeles at a Spanish speaking mission.

“Being a missionary there was amazing. I met so many people that I love dearly. I taught and befriended people from every country that speak Spanish around the world and a lot of other countries as well. Several people that I taught about Jesus Christ were baptized and became members of our Church,’” Pfeil said.

While on a mission, missionaries are also instructed to focus on others and give up many activities of their daily lives before their mission, such as talking with families and friends.

“The most challenging part was also one of the most rewarding parts. As missionaries we’re supposed to forget ourselves and constantly think of others, just like Christ did. That means that we don’t date or go to the movies or talk to our families more than once a week or really do anything for ourselves. It sounds crazy, but it really makes you happy once you get used to it,” Pfiel said.

Pfiel has since returned to her studies at Brigham Young University (BYU) after completing her mission and views her experiences as life-changing.

“I decided to go on a mission because the gospel of Jesus Christ has brought me so much joy in my life and I wanted to share that with other people. It’s the best decision I’ve ever made and definitely changed my life for the better,” Pfiel said.