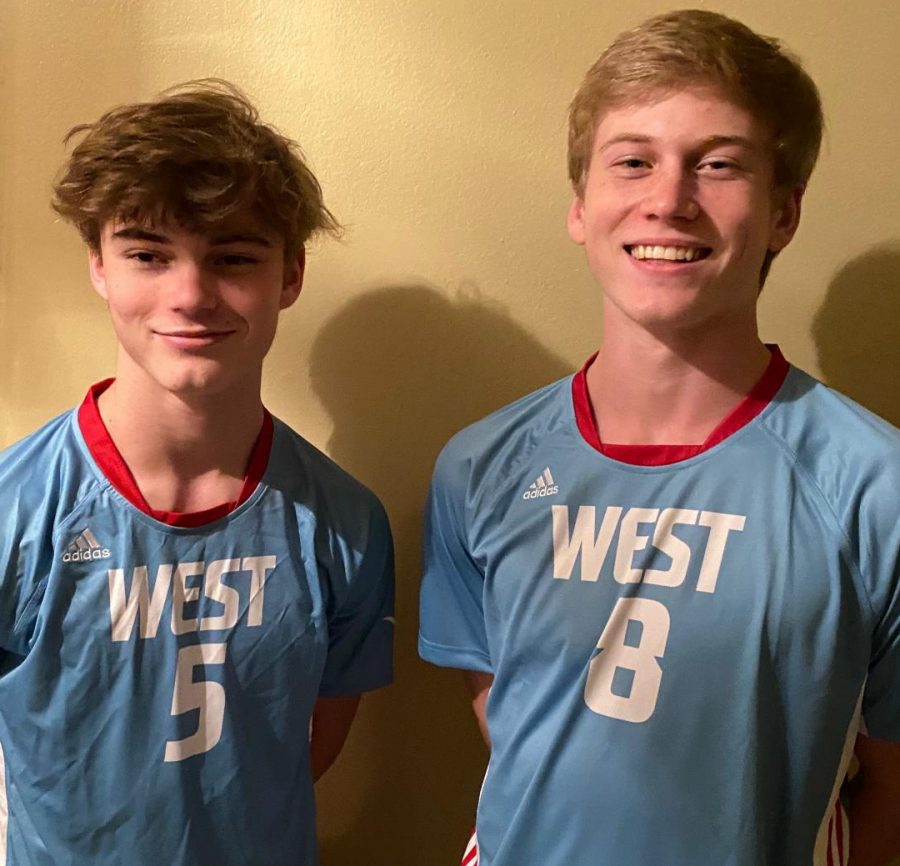 Wearing their varsity jerseys, brothers Jack and Sam Goedde smile for a photo. This year, the brothers had the opportunity to play on the same volleyball team, but their season was cut to only two weeks due to the outbreak of COVID-19. “I know that Jack worked extremely hard to prepare for this season so that he would have a chance to make varsity and play with Sam,” boys varsity volleyball coach Susan Anderson said. “Had [they] been able to play, I know they would have pushed each other on the court and really bonded.”

From practicing volleyball in their front yard to sharing the varsity court, senior Sam Goedde and freshman Jack Goedde took their bond to a new level as teammates on the boys varsity volleyball team. Both Goedde’s have been playing volleyball since they were young, starting on Catholic Youth Council (CYC) teams.

“My favorite thing about the sport is definitely the energy that can be produced,” Jack said. “After passing a really good ball [or] getting a really good kill, it is so easy to turn to your teammates with excitement and build the overall energy on the court from there.”

This year, Jack aimed to be on the varsity team. His position, libero, was left vacant this year.

“I knew that the varsity coach and players respected me as a player and I had known they were looking for a new libero,” Jack said. “I knew I had a shot at making it, but I also knew I would have to be working pretty hard for the spot.”

Jack and Sam often play with their family at home and at the gym and head coach Anderson has coached and known all four of the Goedde’s, including their older siblings.

“My favorite part of playing with Jack was that, growing up, we always played sports together in the front yard,” Sam said. “To be able to play at the varsity level with him was definitely something special.”

“All of my teammates have been super supportive about me making the varsity team,” Jack said. “I knew a lot of them as my brother’s friends but also I knew them through my club team HPSTL.”

With the outbreak of COVID-19, the volleyball season has ended, cutting the Goeddes’ time together on the same team to only two weeks of practice.

“Had we been able to play, I know they would have pushed each other on the court and really bonded during our games, celebrations and [training] a great team,” Anderson said. “I know that Jack worked extremely hard to prepare for this season so that he would have a chance to make varsity and play with Sam. I will miss them playing together.”

While this season is cut short, Jack plans on continuing through high school. Sam is still undecided about whether or not he will play in college.

“I think next year is going to be weird being with some of the people that Sam has been friends with for a bit that I’m just now starting to get to know,” Jack said. “Just not having his presence around might be a little weird at first, but I’m sure it won’t be too hard to adjust.”

Even with only two weeks, Anderson believes that Jack and Sam have both demonstrated their dedication to the team.

“When it comes down to it, they will give their all for whatever the team needs and give all their energy,” Anderson said. “This is a Goedde trait. All four kids have this extreme work ethic, intensity on the court, and will run through a wall for their team.”