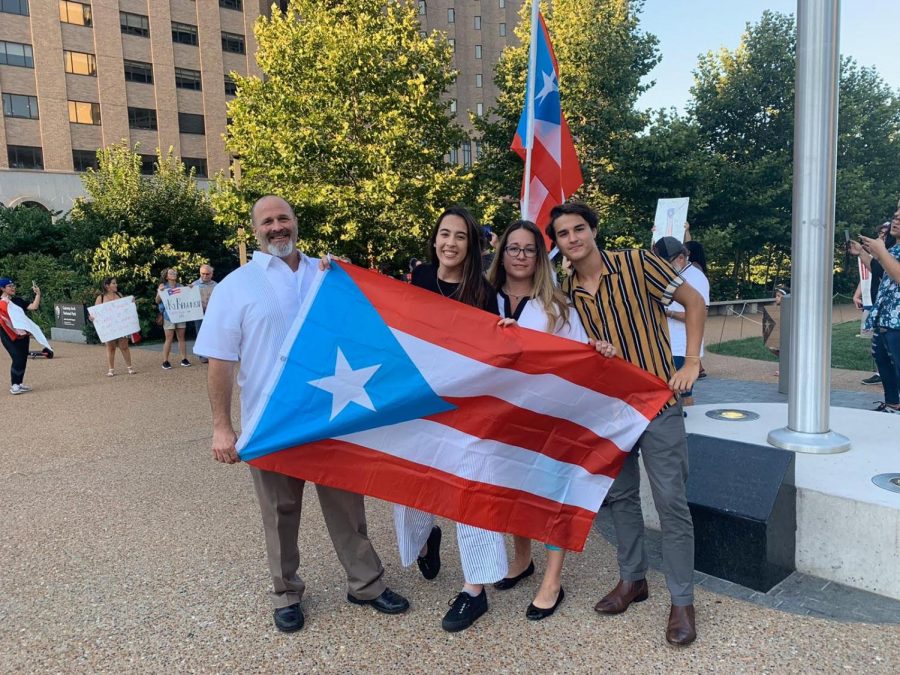 Holding the Puerto Rican flag, Gonzalez and his parents attend an event in downtown St. Louis with other Puerto Ricans that live in the area.

“I learned Persian first when I lived in Iran, then I learned English, but I kinda lost the Persian when I went into elementary and middle school,” Rezaei said. “In high school, I tried to learn it back, so I speak it with my parents now.”

Rezaei believes that speaking Persian has helped him connect with other native speakers.

“I enjoy connecting with other Persian people. When you meet someone who already knows Persian, it’s kinda fun,” Rezaei said. “I think if I ever want to go to Iran or something, I think it’s good to be able to communicate with people who are from your own culture or from a different culture. I think it’s cool to connect with people who are like-minded or come from a similar culture as you.”

Rezaei also hopes that learning about different cultures and languages will help when traveling in the future, especially as he continues learning Spanish while in high school

“Everybody learns a new language and I’m really interested in languages because when you go to different places it’s really cool to be able to talk to people, because there’s different cultures and I think that’s really interesting,” Rezaei said.

For Rezaei, the United States offered many prospects that his family could not have in Iran.

I think the best part [about living in the United States] is that there is a lot of freedom here and everybody can express who they are and what they want to be, which is something that you can’t really do where I’m from,” Rezaei said.

As her peers prepared for the excitement of high school, freshman Luisa D’Aquino Lazarini was adjusting to a new foreign home as she moved from Jundiaí in São Paulo, Brazil to St. Louis, Mo. D’Aquino arrived in the United States halfway through her eighth grade year in Brazil due to the difference in school schedules.

“We don’t have breaks during the season,” D’Aquino Lazarini said. “We are out of school from December to January, and then in July. School starts in February right after a big holiday,  which is Carnival or Mardi Gras.

“I already took Spanish in Brazil so I wanted to finish it and also have it for college,” D’Aquino Lazarini said.  “There are no electives [in Brazil], and Spanish is a requirement and English is also a requirement.”

D’Aquino Lazarini sees her knowledge of three different languages as a way to connect to her culture.

“I think it helped actually having this [knowledge of three languages], it’s just a good thing for me,” D’Aquino Lazarini said. “It just gives me something that I have that’s mine.

Beyond college applications and job skills, D’ Aquino Lazarini hopes to bring awareness to the hundreds of languages in the United States as well.

“Even though English is the main language in the US, there’s still a lot of other languages that need to be spoken,” D’Aquino Lazarini said.

D’Aquino Lazarini also hopes to make her others more conscious of what it is like to be an immigrant.

“People should not stereotype immigrants since they are part of the American community and benefit it in many ways,” D’Aquino Lazarini said.

Searching for new opportunities, senior Fernando Gonzalez’s family moved from Puerto Rico to the United States when Gonzalez was seven.

“We moved because my dad lost his job. His business went under, so really the U.S. gave my family an opportunity to start over, start again and get back on our feet–[the] land of opportunities and all,” Gonzalez said.

Gonzalez, who learned both Spanish and English as a child, challenged himself with understanding French as well.

“I thought taking Spanish would kinda be the easy way out. I didn’t want to sit in a class where I knew everything, so I thought I would challenge myself and learn a different language,” Gonzalez said.

By learning multiple languages, Gonzalez looks towards the long term benefits of being trilingual.

“Obviously it will help with superficial things like traveling; you can connect with more people if you know their language,” Gonzalez said. “Also in the job search, people look for people that know different languages and can again communicate with people so that helps. Also colleges love it when you speak more than one language.”

Gonzalez and his family work to preserve many Puerto Rican traditions with others in the St. Louis area.

“Even though we are far away from our island, Puerto Rico lives strong within us as we continue to celebrate our traditions, enjoy our typical foods, congregate with fellow Boricuas [Puerto Ricans living in the United States], and speak the language that expresses our culture the best,” Gonzalez said.

When her father’s job moved her family from Hungary to the United States, sophomore Anna Csii-Fejer worked to embrace her Hungarian traditions in her new home.

“There aren’t many Hungarian families that we know that live here. We have a couple of family friends that moved here for the same reason through the same company so that’s kind of the community,” Csiki-Fejer said.

Csiki-Fejer is fluent in Hungarian and English, and was inspired by her siblings to learn German in high school.

“Both of my siblings took German when they were in high school and they both participated in the exchange that they went to and I was really interested in that because then you get to experience the culture and live their lives,” Csiki-Fejer said.

Csiki-Fejer encountered many obstacles in learning English after her move to the United States from Hungary. Her biggest challenge was understanding homophones.

“You know the words like see and sea? You can see something and the sea? Words like that where they sound the same but have two different meanings [were the most difficult part of learning English],” Csiki-Fejer said.

Attending high school has given Csiki-Fejer a way to embrace American culture while still holding on to her family’s Hungarian roots.

Csiki-Fejer’s linguistic knowledge is a valuable asset when she visits family and friends in Hungary, Romania and Austria.

“I travel to Hungary during most summers, so since I’m able to speak the language, I can communicate with people there and I can pick up on their culture,” Csiki-Fejer said.

Due to her own experiences as an immigrant, Csiki-Fejer hopes others can be more understanding of immigrant populations.

“I think [the adjustment process] is different for everyone, so just to be considerate of that,” Csiki-Fejer said.