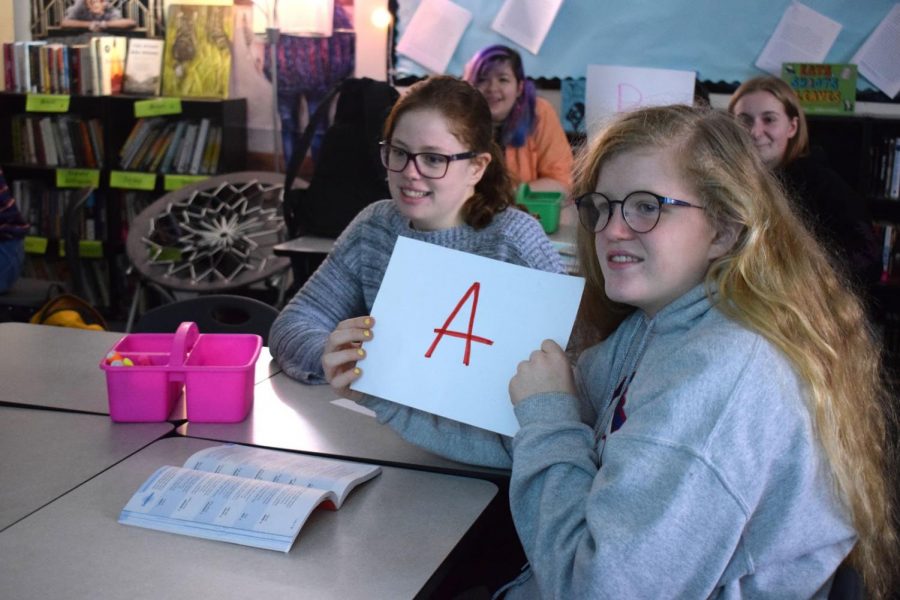 Competing in a Great Gatsby themed Trivia Crack game, juniors Acadia Vance and Karen Trevor-Roberts respond to a question regarding chapter five in English III teacher Erin Fluchel’s class. The game, coded by senior Ronik Bhaskar, was created as a fun way to discuss and analyze the book. “It helped me study a lot and it was a lot of fun,” Trevor-Roberts said. “It was engaging because we got to write the questions, and playing the game helped us dive deeper into the book.”

Fluchel wanted to find a unique way for students to get engaged in discussing the book. Inspired by the resurging popularity of the mobile game Trivia Crack, she asked Bhaskar, her student aide, to create a “Great Gatsby” themed version using code.

“As student aide, I had the really exciting job of trying to put [the project] together,” Bhaskar said. “I used it as an opportunity to learn. While the time frame was very short, I was still able to make discoveries and learn new concepts that I hope to apply down the road. Having a finished product was nice, but the journey to get there was much more fascinating. [Programming is] just fun, it’s not something that I do because I feel like it’s necessary. I do it because I want to–and if it is necessary, that’s a side effect.”

“I made a program that collected all of the [students’] questions from the Google Form, and then put them into a data list,” Bhaskar said. “Every time you would click for the next question, it would pick a random category, choose a question from that category and ask it to the class. Then, based on what the [students’] answers were, Fluchel would check it, give the correct amount of points and then keep going.”

Junior Maddy Truka believes the game made her take a deeper look at “The Great Gatsby.”

Having learned Java in AP Computer Science last year, Bhaskar decided to learn Python on his own last summer. Since then, he has had the opportunity to create projects both in and out of school.

“Recently, three others [and I] worked on a really big project and presented it to the class after two months of development,” Bhaskar said. “When I was trying to learn the basics of programming, I designed a lot of video games. They were really fun to work on, and that’s how I spent my last spring break.”

Bhaskar also helped librarian Lauren Reusch code Spheros for an Honors English 2 “Lord of the Flies” project earlier this year. Despite his current enthusiasm for computer science, Bhaskar initially did not see himself getting into the field.

“Admittedly, I wasn’t into programming; it seemed very unreachable. It seemed very secretive, almost like you couldn’t [program] unless you knew everything about it to begin with,” Bhaskar said. “I was afraid to start, but then I took AP Computer Science. I realized that if you can speak English and you can do basic arithmetic, you can program. That’s all you need.”

Planning to study computer science in college, Bhaskar’s love of learning motivates him to continue programming.

“Anything that I do, I do to learn, whether it’s applying the skills that I already have, learning new ones or teaching others. It’s all to learn more about the subjects that I care about. That’s how I approach pretty much everything that I do, whether it be competing in debate tournaments, writing these programs or being in school,” Bhaskar said. “Everyone has some motivator, something that they need to keep doing. Otherwise, they’re going to go crazy. For me, I realized that if I wasn’t learning, then I wasn’t enjoying what I was doing, so I have to be learning constantly.”